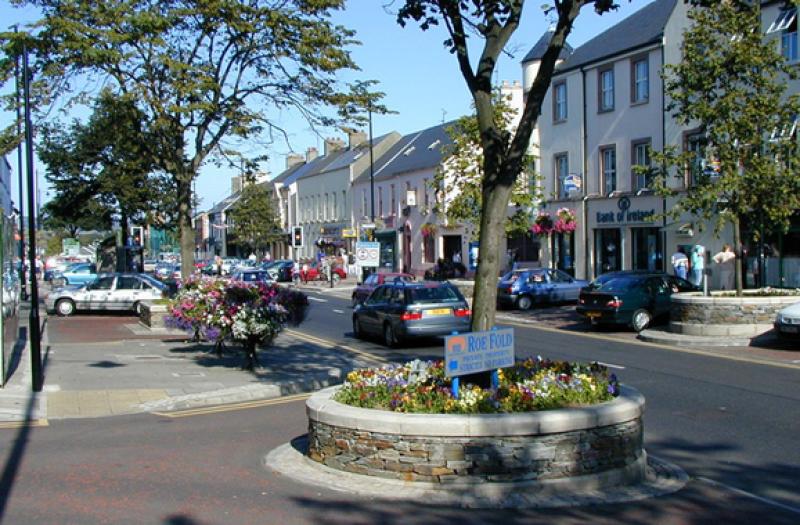 A man who by his own admission encouraged a driver of a stolen vehicle to drive the wrong way down a one way street and through a pedestrian area has been jailed at Derry Magistrate's Court. Jordan Corscadden (19), of Roeview Park in Limavady, admitted two sets of charges in relation to incidents on 4 and 7 January this year. The court heard on the date in question a staff car was stolen from a children's home and was spotted later by police in Limavady doing a three point turn. The court was told police gave chase and the car drove the wrong way down a one way street and then entered a pedestrian area. The court heard police followed with members of the public pointing to where the car had gone. On Main Street (picured) police noticed that the car was boxed in behind a van and a traffic island. They approached and the driver rammed the police car injuring two officers and causing damage. The occupants of the car made off. A short time later Corscadden presented himself and said he had been in the vehicle. He said a friend had picked him up and he was well aware it had been stolen. He said he had not been driving but said he had 'encouraged' the driver to drive as he did. The court was then told that on January 7 police were called to Rockmills in Derry by an ambulance crew who said they had an aggressive male. Before police could get there Corscadden had left and as he did so he smashed a glass door belonging to a fast food outlet. Police located Corscadden and due to his condition he was taken to Altnagelvin Hospital where he was abusive to staff and police despite being warned about his behaviour. Defence barrister Stephen Chapman said the driving had been 'very dangerous activity' which risked causing injury or worse. Corscadden was sentenced to a total of 10 months in prison.
ADVERTISEMENT - CONTINUE READING BELOW