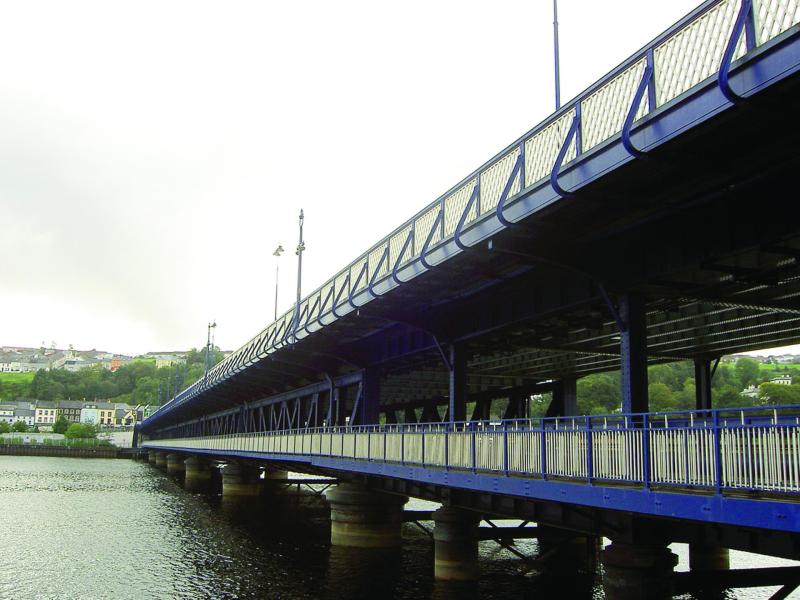 Recurring flooding issues which have resulted in the closure of the Craigavon Bridge are impacting the economy and people’s day-to-day lives, local councillors have said. Investigations are underway to ascertain the cause of flooding which led to the closure of the “old bridge” on two occasions last week. The lower deck was closed to traffic on February 2 and again on February 6 due to flooding. On both occasions there were long tailbacks as motorists travelling to and from the city centre experienced long delays. NI Water which is the agency responsible for dealing with the issue has since said that the source of the problem has not yet been identified and investigations are ongoing. Independent councillor for the Moor, Gary Donnelly, said it’s an infrastructural problem which keeps cropping up every time there is a heavy downpour. “They’re not dealing with the fundamental problem,” he said, “it needs upgraded and fixed properly, but they keep going with a sticking plaster solution instead of addressing the underlying problems with drainage and sewage in the city. “They’re reacting every time there’s a downpour instead of being proactive and sorting the problem once and for all. “It’s affecting people’s lives and the economy, if people are trying to get to work in the morning and they’re all an hour late then that’s thousands of hours lost. “Ultimately, it’s costing money and disrupting people’s lives.” His views were reflected by independent unionist councillor Maurice Devenney who believes the matter needs to be investigated immediately. “Every time we have rain we can’t be closing one of the main bridges or carriageways into the city.  I noticed travelling from Newbuildings that a gulley on the bottom deck is always blocked. “We have a river passing underneath the bridge so it’s difficult to understand why we can’t get drainage into the river from the bridge.” Alderman Devenney added: “It caused serious inconvenience for people going shopping in the town and those going to hospital appointments.” Meanwhile, a spokeswoman for NI Water said: “On Wednesday 6 March, following heavy rain overnight, Craigavon Bridge, Lower Deck suffered flooding and had to be closed for a time to allow flood water to subside. The road has now fully reopened to traffic. “NI Water are carrying out investigations and will meet with colleagues in the Dept for Infrastructure to ascertain the cause of the flooding.  This will form the basis of any recommendations that can be made to prevent a future occurrence of flooding at this location.”
ADVERTISEMENT - CONTINUE READING BELOW