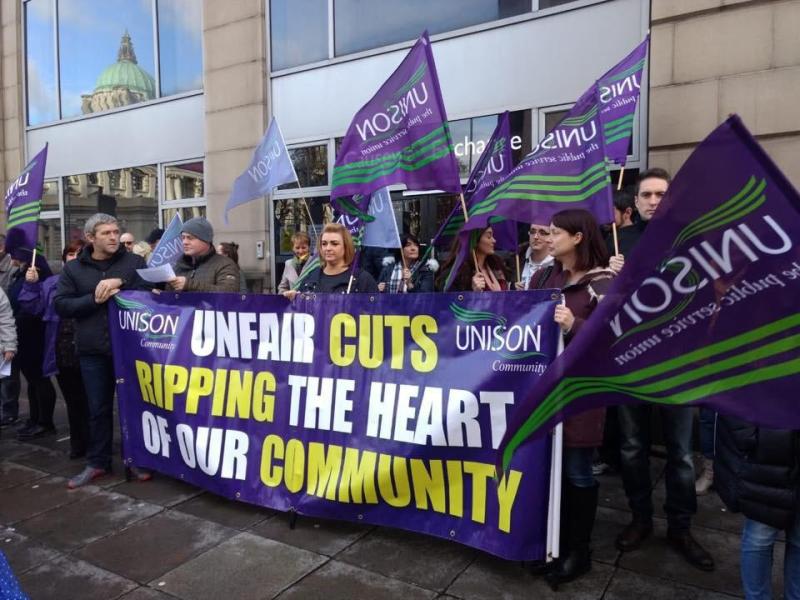 Local councillors have been invited to a public meeting organised by trade union, UNISON, to back frontline workers in the Supporting People Programme. At the meeting, councillors will be asked to lend their support to a motion that will be brought before this month’s full council meeting on March 21. UNISON Community Branch activists, with the support of others, have undertaken a commitment to bring about change within the Department for Communities and Housing Executive funded, Supporting People Programme. Workers in the programme provide housing related support services, help people affected by domestic violence, those with addictions, families with child protection concerns, people in need of benefit advice and more. Niall McCarroll, UNISON Community Branch Chairperson, said: “UNISON have proposed a motion to Derry City and Strabane District Council which will be tabled and discussed at the next full council meeting. “All elected representatives have been invited to this public meeting (March 13) and to support our motion. “This public meeting has been organised to provide a platform for all elected representatives and citizens to listen to frontline workers – detailing their work experiences and providing the reasons behind the campaign and why our motion should be supported by the council.” UNISON Community Branch launched the Supporting People Campaign on November 7 outside the Department for Communities building in Belfast, during which it had planned to hand deliver its position paper to the department, detailing the background to its campaign. However, members were denied entry and as a result could not deliver the paper. A letter subsequently sent to all local councillors explained that, while the DfC’s actions were “disappointing”, it did not deter workers from proceeding with their campaign which aims to raise awareness and highlight the lack of accountability and equality across the Supporting People Programme. Mr McCarroll said the UNISON Supporting People Campaign will contain many parts and strategies all of which are designed to focus minds and be a voice for those who avail of support, and that of the frontline workers who provide support through the programme. An online petition has been launched and in tandem with hard copy petition sheets, 2,100 signatures have now been received, supporting the campaign. He added: “The next stage of our campaign will be a motion brought before DCSDC. “Following initial contact with elected representative on 5-9-18, Independent Councillor Darren O’Reilly got in touch and agreed to support our campaign and raise our motion, the motion will be seconded by Independent Councillor Gary Donnelly. “DCSDC Councillors Patricia Logue and Jim McKeever have also made contact expressing their support.” UNISON’s motion will read: “That this council recognises the specialist work being carried out by frontline workers through the Supporting People Programme and backs the workers trade union, UNISON in their call for an, independent review into the Supporting People Programme. “Any such review must have the direct involvement of UNISON, with a specific focus of highlighting the experiences and work completed by frontline workers.” This week’s public meeting will take place at the UNISON Hall, Clarendon Street, on March 13, at 7.30pm. Photo: UNISON workers hold protest outside Department for Communities building.
ADVERTISEMENT - CONTINUE READING BELOW