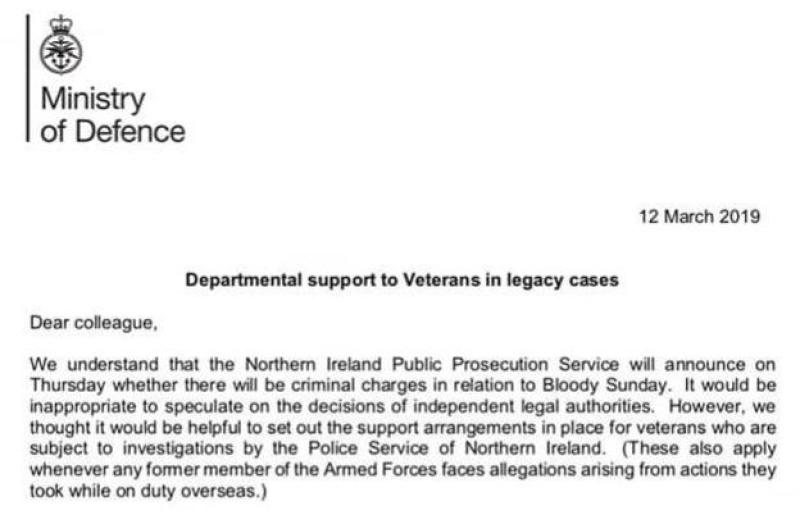 The Ministry of Defence (MoD) has said that it will cover any legal bills incurred by former British soldiers if they are faced with prosecutions for their actions on Bloody Sunday.

It has also emerged that the Parachute Regiment has appointed a specialist ‘Legacy Officer’ to assist those who may face prosecution.

Families of those shot dead and those wounded on January 30, 1972 by the Parachute Regiment will find out tomorrow morning whether the Public Prosecution Service have decided to make a series of charges against the soldiers who caused the deaths and injuries.

A MoD statement was posted its website on Tuesday night outlining its “support arrangements” for “veterans who are subject to investigations by the Police Service of Northern Ireland.”

In another section of the document where ex-soldiers are advised on how to access legal representation the statement says: “Where appropriate, special arrangements are made for particular cap badges-including in respect of the Bloody Sunday investigation, the Parachute Regiment. To that end Parachute Regiment Headquarters has established a dedicated ‘Legacy Officer’ post (currently held by a former Regimental Secretary) who has been assisting with many veterans individually and also acting as a channel through which other agencies and sources of support can be involved where appropriate, depending on an individual’s needs and circumstances.

The statement makes several direct references to the events of January 30, 1972 in the Bogside saying: “We understand that the Northern Ireland Public Prosecution Service will announce on Thursday whether there will be criminal charges in relation to Bloody Sunday. It would be in appropriate to speculate on the decisions of independent legal authorities.”

However, the statement goes on to assure ex-army personnel that any potential legal expenses as a result of future prosecutions will be covered “entirely” at the “Ministry of Defence’s expense.”

The MoD has also asserted that no time limit on financial cap will be placed on the legal representation for former soldiers.

Any such legal costs will be taken from the public purse and in a reference to that the statement says: “We are of course mindful of the need to safeguard taxpayers’ interests, but decisions on the selection of independent legal representatives are not driven by consideration of costs, but of offering veterans the best possible representation.

“For Bloody Sunday criminal investigations, continuity of representation from the Saville public inquiry has been preserved where practicable.”

“The Ministry of Defence has ensured that all veterans under investigation in respect of Bloody Sunday are aware of the support available, either via their legal representatives or directly.”

And, one of the final paragraphs of the statement says: “Whatever view one takes on that important work, we would hope that it would be common cause-in recognition of our duty of care to former Armed Forces personnel, and the spirit of the Armed Forces Covenant-that those who served should now receive the fullest possible practical support when facing the prospect of legal action against them.”