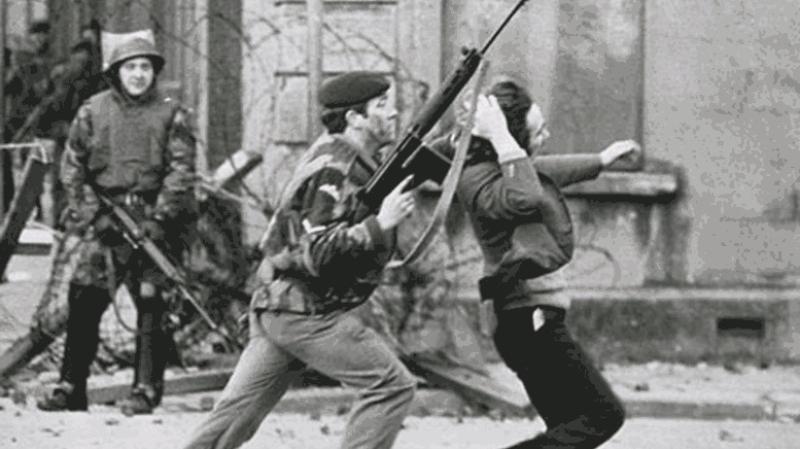 Michael McDaid was 20-years-old and John Young was 17-years-old when they were shot behind a rubble barricade on Rossville Street. Another man, William Nash (19) was also killed close to Mr McDaid and Mr Young.

Michael McDaid was struck by a single round that entered his left cheek and exited his body through the right side of his back.

John Young was also hit by a single bullet. The round entered his body on his left cheek, just to the left of his nose below the eye and exited through the left side of his back.

The area where these victims were killed was referred to in the Saville Inquiry as Sector 3.

Saville made significant conclusions in relation to the deaths of Mr McDaid and Mr Young. Firstly, the Tribunal was sure that William Nash, John Young and Michael McDaid were all shot and fell close together when they were slightly to the west of the centre of the barricade.

Also, Saville stated that both John Young and Michael McDaid were facing north in the direction of the soldiers who were further along Rossville Street when they were hit and that none of those killed at the rubble barricade were armed.

Corporal P made his first statement to the Royal Military Police at 10.30pm on the evening of Bloody Sunday and described how he fired two shots at an alleged nail bomber. He said that the alleged bomber was near an alleyway leading to Columcille Court and the alleged device had been lit and was fizzing. The soldier also claimed that he'd struck the ground with his first round and hit the man in the chest with his second shot and alleged that a crowd removed the man's body.

However, Saville Inquiry concluded that the first man killed in Sector 3 was 17-year-old Michael Kelly and that he was shot by Lance Corporal F, who at the time Corporal P fired had not reached the position at Kells Walk from where he shot Michael Kelly.

So, the Tribunal rejected Corporal P's account that he fired two shots at a nail bomber and concluded that he fired his first two rounds from his waist or hip over the heads of the crowd on Rossville Street.

Saville also stated that Corporal P fabricated the accounts of shooting a nail bomber to hide this firing, there was no justification for it and it was in clear breach of the Yellow Card rules of engagement.

Corporal P then claimed that he had advanced towards the rubble barricade and came under fire, possibly from a handgun and that two bullets struck the wall above his head.

He then said he lay on the ground from where he saw a man get up from begins the barricade with what seemed be a pistol in his hand and pointed it in the general direction of the troops.

Then, Corporal P claimed to have fired four rounds at the man, the first of which struck the barricade and the other three appeared to have hit the man in the body. He added what he assumed was the gun. that a group of people then ran towards the body, some of who bent down to pick up

Additionally, Corporal P then said he discharged five more bullets over the heads of rioters in order to disperse them as he was making his way back to his vehicle-an Armoured Personnel Carrier commanded by Sergeant O-which at this point was near the northern end of Block 1 of the Rossville Flats.

Corporal P's account changed in his second statement which was given around 3pm on February 1. This time he said he'd fired three rounds over the heads of the crowd-not five as he'd originally said. Overall, he then said he'd fired a total of nine rounds on Bloody Sunday.

When he gave evidence to the Widgery Inquiry Coporal P added that the gunman he'd claimed to have seen at the barricade in fact had fired a number of rounds. He had not told this to the Royal Military Police.

The submission to the Public Prosecution Service from Madden and Finucane point to the fact that the Saville Tribunal rejected Corporal P's statement that he could remember very little about Bloody Sunday.

The Inquiry concluded that 'P' did not fire at a nail bomber but rather fired two shots from his waist or hip over the heads of the crowd and furthermore he did not fire over the heads of an advancing crowd at the barricade because there was no evidence to suggest that a hostile crowd moved forward at that time.

Instead, the Tribunal asserted that all other people, apart from those who had been killed at the rubble barricade had fled, except for Alexander Nash who had gone to the aid of his son William. Alexander Nash was severely wounded in the process of doing so.

Also, Saville concluded there was no evidence of a gunman at the barricade and the claim that a man would get up with a pistol in clear view of a group of soldiers never mind fire a number of shots, was just not credible. Instead the Tribunal concluded that Corporal P did fire at least four rounds, but lied about his target because he knew there was no justification for what he did.

Additionally, the Tribunal said it was possible that Corporal P fired more that four shots in this direction because they did not believe his claims he fired over the heads of a crowd because the crowd did not exist.

Neither was there any evidence, said the Tribunal, to support 'P's' claims about where he was when he fired the later rounds or when he actually fired them. Some of these rounds may have been fired from the low walls of a ramp at Kells Walk and could have been discharged earlier than the soldier was prepared to admit.

Lance Corporal J was a member of the Anti_Tank Platoon and gave his initial statement at around 3.15pm on January 31,1972.

He stated that as he moved along Rossville Street he believed he could hear automatic gunfire coming from Rossville Flats.

Then, he claimed that the soldiers came under heavy fire and heavy stoning from groups of young people at Glenfada Park. He too claimed he'd seen shots being fired from behind the barricade and that a youth was in the process of firing an object which was smoking. 'J' said that he fired one shot that hit the top of the barricade and he thought it hadn't struck the youth.

The soldier also gave an account that as he moved south along Rossville Street he fired another round at a man at the southern corner of Block 1 of the Rossville Street flats whom he claimed was also carrying an explosive device. But again, he said he did not think he'd struck the man.

Saville rejected Lance Corporal J's claims that he had virtually no recollection of Bloody Sunday or that he'd witnessed a nail bomb explode before firing at an alleged bomber. In fact, the Tribunal rejected all 'J's' claims to have seen nail bombers in any section of Rossville Street.

There was no evidence that 'J' fired more than once at the barricade but the round he did fire could have killed William Nash, John Young or Michael McDaid. Saville also concluded that there was no doubt that Lance Corporal J lied about gunmen, nail bombers and nail bombs to conceal that he fired knowing that no one in the vicinity was posing a threat or that he didn't care whether anyone was posing such a threat.

Corporal E, now deceased, gave an account that he'd fired from behind the low walls of the Kells Walk ramp at a man with a pistol. He said this gunman had fired one shot from a window from in the next-to-top floor of Block 1 of the Rossville Street flats.

The Saville Tribunal concluded that 'E' lied in a number of aspects of his accounts in 1972, particularly in relation to seeing a petrol bomb smashing and burning in front of the rubble barricade and encountering nail bombers before opening fire. Neither was it believed that he'd seen a gunman at a window at the Rossville Flats. It could be discounted therefore that 'E' was responsible for firing in another direction and killing Mr Nash, Mr Young or Mr McDaid.

The submission from Madden and Finucane sates:"The evidence and foregoing conclusions reached by the Tribunal point unmistakably towards the evidential test for a successful prosecution being satisfied concerning the murder of Michael McDaid and John Young by Corporal P and Lance Corporal J on Bloody Sunday.