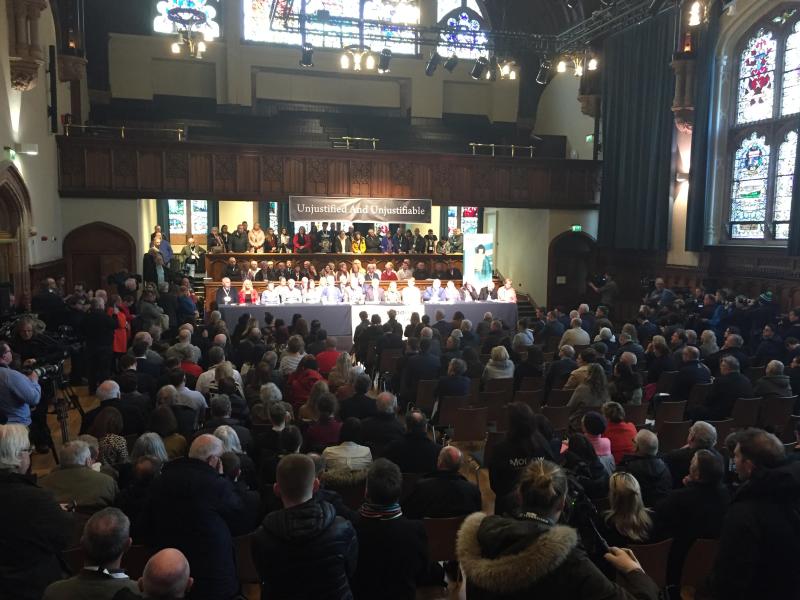 A minutes silence for those killed on Bloody Sunday concluded a press conference held after the announcement that a single soldier will face prosecution. Soldier F will face charges for two murders and four attempted murders. Eighteen other suspects-16 former soldiers and two alleged former members of the Official IRA will not face any charges. A thronged Main Hall at Derry's Guildhall listened quietly and intently as some of the relatives of those killed addressed a press conference. John Kelly, whose 17-year-old brother Michael was shot dead said: "I was going to begin by saying it was a good morning, but it's not. "We have been denied our human rights again. We have walked a long way since our fathers and brothers were killed. All of the parents of the deceased are now dead. Bloody Sunday created a legacy that prolonged a conflict." Michael McKinney, whose brother William described the Public Prosecution Service announcement as "disappointing" and said that everyone present was mindful of those families who had not received news that the soldiers responsible for killing their "loved ones". "This does not mean that because they haven't been prosecuted that they are not guilty. This does not mean that the killings were "dignified or appropriate" as described by Karen Bradley. "If the investigation had been carried out properly at the time the outcome could have been much different. "The passage of time has made charges difficult, but the passage of time does not provide blanket immunity. There can be no statute of limitations-no new law to protect state killers." John Kelly also called on the PPS to affirm that there will be no delay in preferring charges against Soldier F in order that "justice is no longer denied."
ADVERTISEMENT - CONTINUE READING BELOW