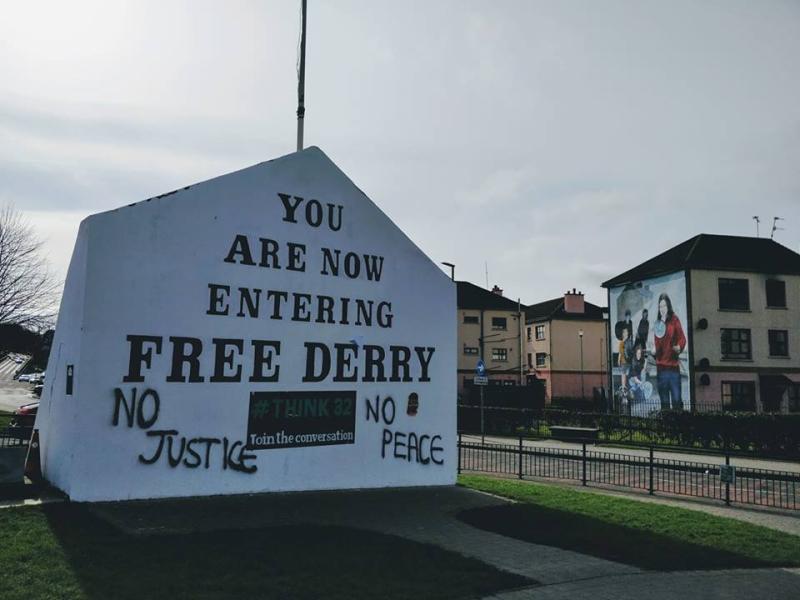 Eamonn McCann has called for the “fight for justice” to continue after the announcement that one British solider will face prosecution in relation to the Bloody Sunday killings. Since the announcement on the prosecution of one British paratrooper, Eamonn McCann shared what appears to be newly scrawled graffiti on Free Derry Wall which reads, “no justice, no peace”. Mr McCann’s Facebook post stated: “Derry responds.  Without justice there can be no peace.  No justice, No peace. The fight for justice for the Bloody Sunday victims continues.” Speaking in the Guildhall earlier today, Eamonn McCann told the Derry News it is “upsetting” that no high-ranking British soldier will face prosecution and he believes others should be investigated for perjury as “not one single soldier told the truth”. He commented: “There is certainly disappointment amongst some of the families, they are not an organisation with a line they all accept, they are all individuals and there are even different members of the same family with different views.  There are those who say we’ve got to carry on campaigning because they haven’t got the full truth yet and we haven’t had vindication. “And there are other families who will think that’s it, we’ve campaigned for so long, we’ve done our best and we’ll leave it now.  It’s a bit early to work out, we’re only an hour or an hour and a half since the prosecution announcement. “There are a number of things that are yet to be resolved, one of them is perjury, there now will be investigations into perjury and on the face of it I think there are a number of soldiers who have committed perjury and were warned by Saville when giving evidence that they were speaking under oath. “He gave them formal warning of it but none of them could tell the truth.  Not one single British soldier who gave evidence to the Saville inquiry told the truth, not one.  That’s something to take away from this.” Mr McCann said it is upsetting that none of the hierarchy in the British army will face prosecution, apart from soldier F, a low-ranking soldier. He explained: “No officers are going to be charged, as if they had nothing to do with it, as if this one man and a few of his pals had gone in, in an undisciplined way, defying orders and started shooting from self-loading rifles which are lethal at a thousand yards.  Firing them from twenty yards and on one occasion of course firing at Jim Wray’s body as he lay on the ground at about three feet with a self-loading rifle.  By NATO standards it’s a battle rifle. “So when the full accounting comes, Bloody Sunday will express the ruthlessness of the state when it decides to put down what it sees as rebellious elements.” He continued: “In a way it’s right and proper that the MoD should pay for the legal expense of the soldiers because after all it was the MoD who sent the soldiers here.  It was the MoD that sent paratroopers into the Bogside, so they have an awful lot to answer for but there’s no sign at all that they are going to accept all that. “It’s one thing for David Cameron to say it’s ‘unjustified and unjustifiable’, if it was, take responsibility, his predecessor Edward Heath was a Prime Minister at the time and notoriously advised Lord Widgery, who decided to open the first inquiry, to remember that ‘in Northern Ireland we are fighting a propaganda war as well as a military war’.”
ADVERTISEMENT - CONTINUE READING BELOW