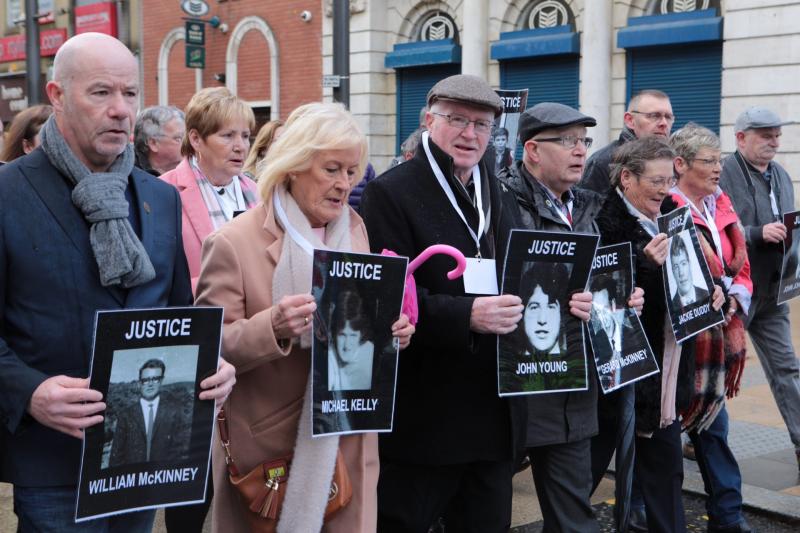 Bloody Sunday families were joined by several hundred people this morning as they marched “towards justice” to hear the fate of British soldiers responsible for killing their loved ones. Just before 9am a crowd assembled outside the Museum of Free Derry at Glenfada Park where a number of the Bloody Sunday families set off for the City Hotel. There they would meet members of the Public Prosecution Service (PPS) and learn of possible prosecutions against paratroopers who killed fourteen people and injured fourteen more. Marchers held aloft a banner reading ‘TOWARDS JUSTICE’ and had to contend with rain most of the way as the tail-end of Storm Gareth swept through the streets of Derry. As they approached the City Hotel family members softly sang ‘We Shall Overcome’ – a protest song synonymous with the Civil Rights Movement. Members of the public applauded the families as they made their way inside to a private meeting with the Director of Public Prosecutions for Northern Ireland, Stephen Herron, and the prosecution team. They remained inside for around an hour and a half during which time news began to filter out that prosecutions would be restricted to one or two soldiers. Outside the atmosphere grew subdued as the public and media gathered that the families were disappointed and saddened by the outcome. One or two of those privy to proceedings emerged.  Tears were shed and hugs shared amongst friends who had fought long and hard for justice. The Bloody Sunday families eventually exited as one and simply said “no comment” when prompted by the press. Once more the families led a dignified march to the Guildhall where a number of them shared their thoughts and feelings on the PPS findings.
ADVERTISEMENT - CONTINUE READING BELOW