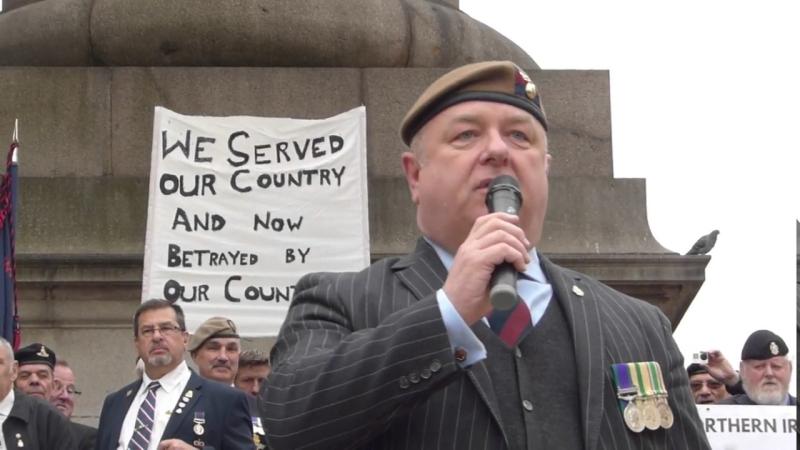 A British Army veterans association has totally distanced itself from one its founding members after comments he made after last week’s announcement concerning Bloody Sunday.

Following the announcement from the Public Prosecution Service (PPS) that a solitary soldier will be charged in connection with the massacre in the Bogside 47 years ago Alan Barry made a series of remarks including one that he’d lead a mass demonstration of former soldiers against the decision through Derry’s streets.

The former Grenadier Guard was a founding member of the Justice for Northern Ireland Veterans (JFNIV) group that has set up in an attempt to prevent former British military personnel being tried and imprisoned for killings whilst on tour in the North.

After the PPS announcement last Thursday, Alan Barry said: “We are not happy. One paratrooper prosecuted is one paratrooper too many.

“We are putting a call out to as many veterans who served in Northern Ireland and want to travel over and descend on Londonderry and march through the streets.

“We will show people that we will not tolerate one of ours being prosecuted when 300 convicted killers were released from jail and 150 ‘on the run’ letters were handed out to those who weren’t apprehended.

In reference to Bloody Sunday the ex-soldier added: “You cannot absolve the republican movement of their crimes against humanity and then decide it’s acceptable to come after an elderly veteran. It’s totally disproportionate.

“Innocent victims will die in war. And relatives need to just get over it and move on. We were fighting a war against the IRA. And the IRA used these people as human shields that day.

“The march will be soon. We are in the planning stages now. We are looking to coordinate with ferry companies and coach operators so we can come in great numbers.

“We are looking to bring hundreds of veterans to Londonderry. We don’t care if there is any objection to this. Bring it on.”

Alan Barry added the marchers wouldn’t “care who they offend.”

However, after Mr Barry’s initial comments republican grouping Saoradh issued statement saying: Following the announcement that former British mercenaries are to travel en masse to Derry to celebrate their campaign of murder in the city, Saoradh wish to make it abundantly clear that we will provide an opportunity for Republicans to radically confront this potential grotesque gathering in the city.

“We refuse to allow such a display of support for imperialism, occupation, colonialism and slaughter to go unchallenged.

“Saoradh hereby publicly state that we will mobilise the people of Derry and beyond to ensure that these former Crown Force members are denied access to the streets of our city.”

At this point the British Army veteran backtracked on his initial statements saying that the protest march will take place in ‘London not Londonderry.’

“Any protest we hold will always be in London outside Parliament as that is the only place that matters, and the only way this witch hunt will stop.”

The words Alan Barry produced an angry reaction in Derry with Dixie Elliott, a former republican prisoner from the city writing on Facebook: “You lot (the British Amy) had to use tanks, saracens, bullet proof vests and rifles to get into the Bogside in the past, so I’m certain you’ll not get beyond Drumahoe with walking sticks.”

A leading member of JFNIV then contacted the Derry News to disassociate Alan Barry from their organisation.

Chris Perkin, who administrates the JFNIV website told the Derry News: “We, the main group do not endorse Alan Barry’s comments on our site and we never had any intention of inflaming the situation with regards to Bloody Sunday.

“Alan does not speak for the JFNIV main site and he has left our organisation after a falling out and formed his own group, but is still using the JFNIV header.”