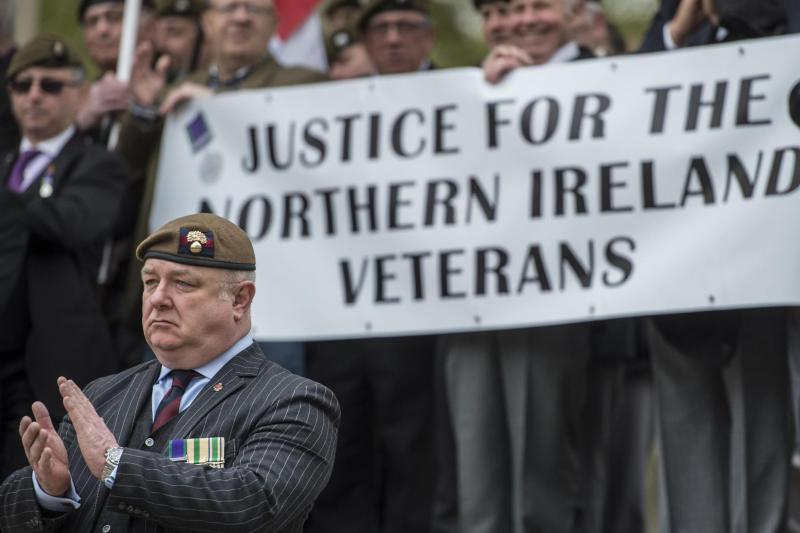 A former British soldier whose apparent plan was to bring ‘a mass demonstration’ of ex-army members to Derry in protest at the prosecutions of former servicemen for their role in the Troubles has said there was never any intention to do so.

And, Alan Barry has dismissed all suggestions that the British veterans group Justice for Northern Ireland Veterans (JFNIV) have disassociated themselves from him.

The ex-Grenadier Guard was heavily criticised last week for supposedly suggesting that he’d lead 'thousands' of British veterans through the streets of Derry after the Public Prosecution Service announced that a single soldier is to be prosecuted for two murders and four attempted murders in Bloody Sunday.

After initially announcing that he would bring the army veterans to the city, Mr Barry then said that a protest parade would be held in London.

Following that a man claiming to be still connected to JFNIV contacted the Derry News to say that Alan Barry no longer had a connection with the organisation.

Chris Perkin said: "We, the main group do not endorse Alan Barry's comments on our site and we never had any intention of inflaming the situation with regards to Bloody Sunday. Alan does not speak for the JFNIV, but is still using the JFNIV header."

However, in response Mr Barry says that it is he who in fact still heads up the veterans association and that it is Mr Perkin who does not represent the organisation.

Speaking to the Derry News he said: "The JFNIV Facebook was hijacked and there has been a continual battle for the last few months with those purporting to represent the group.

"I am the person who gave all the interviews last week. Basically what's been said is absolute tosh, it's a load of rubbish. And, misinformation is disinformation."

Alan Barry also said that the roots of the dispute inside the British veterans group stemmed from the attraction to the association from far right organisations.

"I have zero tolerance for that so I removed far right commentary from the Facebook site. When Martin McGuinness died I wouldn't allow posts reveling in his death. Whilst I regarded him as a terrorist he was someone who assisted the Peace Process.

"I took a lot of abuse from from far right unionists. That's not what we are about. We went to Northern Ireland to protect both communities not one or the other. It had nothing to do with whether someone was a Catholic or Protestant.

I was born in Dublin and I'm a Catholic by birth. My allegiance is to the soldiers. I was a soldier. I didn't go there to oppress the people of Ireland. I am about protecting my brothers who I fought alongside.

"I don't view Northern Ireland through orange tinted glasses. I am not going to ignore sectarianism if it comes from orange or green."

After the initial announcement that a parade of former soldiers was being organised for Derry, republican group Saoradh released a statement which said: "Following the announcement that former British mercenaries are to travel en masse to Derry to celebrate their campaign of murder in the city, Saoradh wish to make it abundantly clear that we will provide an opportunity for Republicans to radically confront this potential grotesque gathering in the city.

We refuse to allow such a display of support for imperialism, occupation, colonialism and slaughter to go unchallenged.

Saoradh hereby publicly state that we will mobilise the people of Derry and beyond to ensure that these former Crown Force members are denied access to the streets of our city."

Alan Barry said: "That statement shows the despicable character of dissidents by trying to stir things up. These people need to be brought down. There was never going to be a march in Derry.

"They are a scourge on society. The veterans beef is with Parliament as MPs and them alone can stop this madness."

"Having a protest in Derry would mean we might as well ask the dissidents to join us afterwards for a part in the local pub and ask Gerry Adams to provide a buffet from his Negotiators Cookbook."

The former British soldier also praised Sinn Fein for their ability to maintain a unified front as he believes many British veterans associations cannot.

He said: "Even after the row over Barry McElduff putting a loaf on his head Sinn Fein stuck together. My final message on this would be that veterans are like hyenas. No matter how hard you try one or two of them will always turn our their own and this is how we could learn a lesson from Sinn Fein."