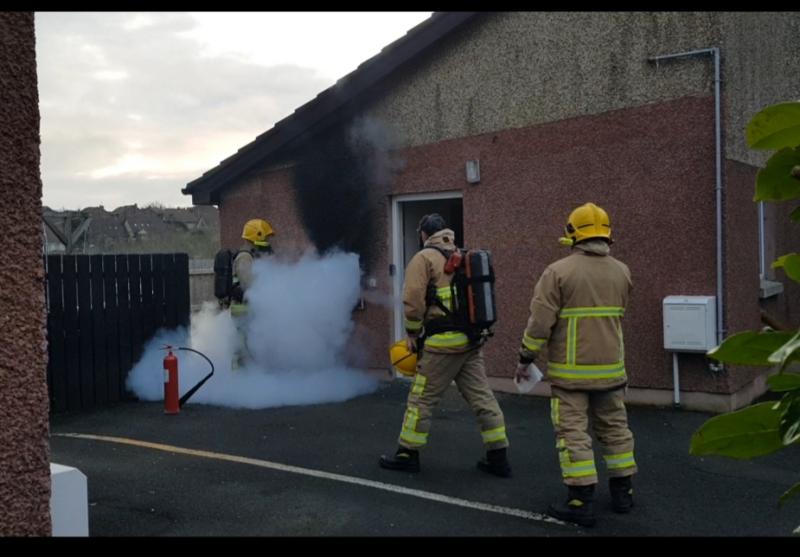 A resident of Donal O’Casey Court on Derry’s Buncrana Road has praised the quick actions of a man who raised the alarm on Wednesday morning after an outdoor electricity meter caught fire at one of the houses.

The resident, who did not wish to be named, told the Derry News he was awoken around 6.50am by a loud knocking at his door.

“I live in the house next door but thankfully it’s detached. There used to be a car port between them but it was removed which was just as well because I think the fire could have spread then.

“It looked like the smoke had spread right through the house. The man who raised the alarm doesn’t live here. I think he was driving past and saw the fire and he woke me up. I had time then to move my car out of the way.

“The neighbour was already out of the house where the fire was. It looks like it was an accidental fire but it could have been fatal.”

A spokesperson for the Northern Ireland Fire and Rescue Service said they received a call to the sheltered dwelling complex regarding the fire at 6.55am yesterday morning. Two fire appliances attended the scene and the incident ended just before 8am. The spokesperson added that the cause of the fire is being investigated.

Meanwhile, a spokesperson for the PSNI confirmed that they had received a report of a concern for safety at Donal O'Casey Court at around 7am on Wednesday morning and they are not treating the incident as being suspicious.

CAPTION: Fire officers attending the scene of a fire at an external electricity meter at a home at Donal O'Casey Court early on Wednesday morning (March 19).
ADVERTISEMENT - CONTINUE READING BELOW