No budget for roads: Department pays out £25,000 compensation for pothole damage to Derry road users in past year 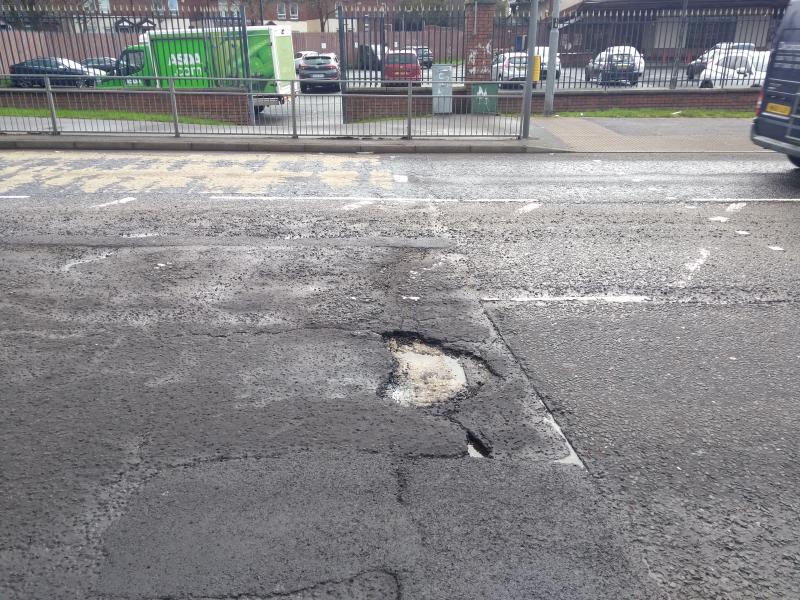 The Department for Infrastructure has paid out over £25,000 in compensation to vehicle owners in the Derry area due to damage incurred by road defects such as potholes, it has emerged. Yet the DfI told the Derry News that resurfacing entire roads is not possible at present given “current budgetary constraints”. Roads across the city are a patchwork of temporarily filled potholes which, the department acknowledges, is leading to “recurring problems” for drivers when these surfaces tear up over time. Surfaces around manholes are particularly troublesome when the asphalt loosens and some car owners in Derry have experienced extensive damage to their vehicles after driving into these dangerous potholes. A DfI spokesperson said: “Manhole covers within the carriageway are subjected to impact loading by vehicles, particularly HGVs and over time this can cause the manhole cover to loosen which can lead the surrounding asphalt or bitmac to breaking up. “The Utility companies are responsible for the majority of manholes and if the Department becomes aware of a problem with a utility manhole cover, either through routine road inspections or from reports from the general public, we refer the matter to the appropriate utility company for action.” The department conceded that full-width resurfacing is the “preferred option” but added that it is restricted by current finances. She added: “Full width carriageway resurfacing may be the preferred approach on roads where pot holes are a recurring problem, however under current budgetary constraints, resurfacing is not always possible.  All roads continue to be maintained in accordance with the Department’s current standards for repair. “We can confirm that during the period 1st April 2018 to 19th March 2019 a total of £26,700 of compensation was paid as a result of vehicle damage incidents in the Derry and Strabane Section Office area. “Please note that this figure relates to the compensation paid due to damage incurred to vehicles as a result of all defects (including potholes) and other issues on adopted footways and carriageways.” Photo: Pothole on the Glengalliagh Road which has since been filled.
ADVERTISEMENT - CONTINUE READING BELOW