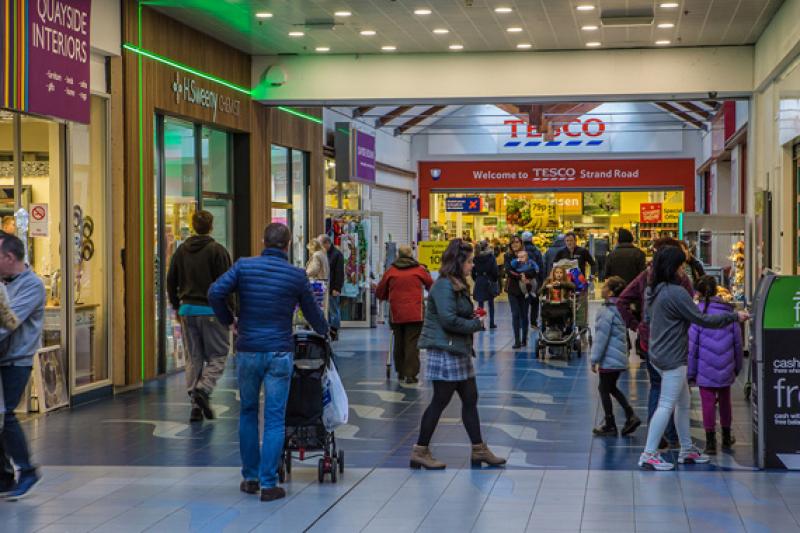 "Derry District Judge Barney McElholm has said that he was 'taking a hard line" against what he described as a "a gang of professional beggars" who fly in and out of Romania in shifts as he jailed a woman for shoplifting. Florica Crina Ispas (29), of no fixed abode, admitted stealing a bottle of vodka from Tescos (pictured) in Quayside on Saturday afternoon last. Derry Magistrate's Court was told police were called after the defendant and an unknown male were seen entering the store and going to the alcohol section. The court heard the male lifted the bottle of vodka handed it to Ispas who concealed it and walked out without paying. The court was told the incident was captured on CCTV and that when interviewed by police, Ispas said she had forgotten to pay as she was on the phone to her children in Romania. The court heard she did not know the male involved and denied he had asked her to steal the vodka. Judge McElholm said Ispas seemed to have forgotten what she went into the shop for as she had bought nothing. Defence solicitor, George Copeland, told the court his client was a Romanian national and a mother seven children. He said she had flown into Dublin some six weeks earlier on a travel visa and she had lived on the streets in Dublin before going to Belfast and then coming to Derry where she also lived on the streets. Mr Copeland said she could give no explanation as to why she stole the vodka apart from she forgot. Judge McElholm said he had been briefed by City Centre Initiative and the PSNI, adding Ispas was not a street drinker and she had appeared at Laganside Court in December, pointing out she had been here a lot longer than six weeks. The judge said this was a gang of "professional beggars" who were all "living very well at home." He said if they were truly indigent they would be entitled to help and support. Mr McElhom added: "These people do a great disservice to the homeless. "They are a professionally organised gang who come here to beg on the streets and take advantage of the good nature of the people here." Stating he didn't believe a word Ispas said, he added "this is not someone stealing food as they are starving," adding this was a professional gang who could afford to fly in and fly out. He sentenced Ispas to two months in prison.
ADVERTISEMENT - CONTINUE READING BELOW