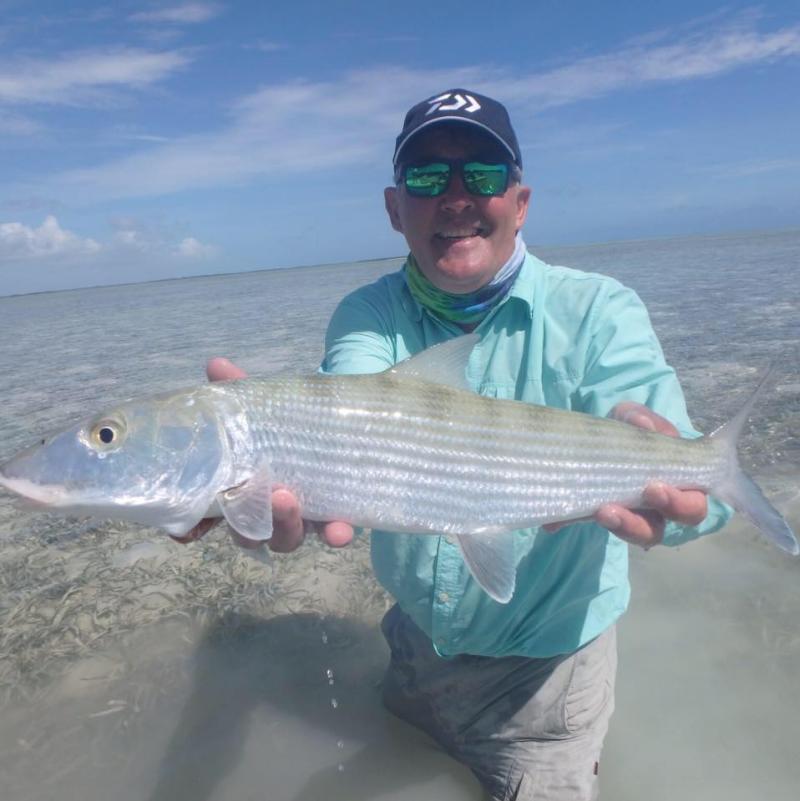 Multiple World Casting Champion Hywel Morgan is hoping he can help inspire local young people to discover the joy of fishing when he demos at the North West Angling Fair in Castlederg on Saturday 6th and Sunday 7th of April.

The high profile Welshman has won casting titles at British, European and World level and is the World Record holder for multiple casting having cast 66 rods simultaneously.

He is best known these days for his television presenting work and he travels the world passing on his knowledge and love of casting and fishing.

His presentation in Castlederg is sure to attract interest from all ages but it is young people who he is particularly keen to ‘hook’.

“Getting young people involved is really important to me because they’re the future and that’s one of the main reasons I coach the Welsh Youth Team,” he explained.

“We have to actively encourage the next generation, not just to show they the joy of fishing but the benefits of being out in the fresh air and enjoying the water and exploring new places.

“I think it’s important to keep the past time going for future generations as anglers play a key role in maintaining and monitoring the environment.

“If it wasn’t for anglers most rivers would be sewers by now, it is anglers who keep a close eye on rivers to spot pollution and organise clean ups.”

The son of Welsh fishing guru Moc Morgan, he first wet a line at just two and a half years of age so has first-hand experience of discovering the joys of angling from an early age.

“With Moc Morgan as a father I had no choice really,” he laughed. ”The day I was born, the nurse said to him ‘You might as well give him a reel now?’ and he told her ‘Sure it makes the same noise as a rattle!’.

“I was fishing from an exceptionally early age, my mum ran our local Post Office in the town so everyone knew her and they would all keep an eye on me.

“I got into casting by accident, I fished for sea trout from an early age, not coming back until 3 or 4 o’clock in the morning sometimes.

“When I was 13 my friends encouraged me to go to the CLA Game Fair and I won the event I entered, it was a 50p entrance fee and the prize was a £15 voucher so I figured there was a profit to be made by competing.

“After that I practised like mad and the following year I entered several events at the Game Fair and won them all, it got to the stage that, when I was 16, I was asked not to enter to give others a chance.

“I graduated to British Casting Association level and the step up was significant, it was like going from driving a car around the village to Formula One.

“It was a steep learning curve but I gave myself six months to get up to speed, I practised five and six days a week in a pavilion in the village and after six months I won the World Championships.

“I managed a Leisure Centre at the time but I decided if I don’t go out on my own now as caster and fisher I never will.”

Hywell will be joined by some of the UK and Ireland's greatest fly-dressers, casters and top angling celebrities at the spectacular setting of Castlederg Castle for the North West Angling Fair.

Free fly tying and fly-casting lessons are on offer with instruction tailored to the specific needs of beginners right through to advanced anglers.

“I try and keep my demos fun and entertaining,” Hywel explained. “There’s something for everyone, from those who have never fished before right up to seasoned anglers.

“It doesn’t feel like work to me, I still get great enjoyment from fishing but I find passing on that pleasure to others equally as satisfying.

“If you want to make money, this isn’t the life for you but if you want to do something you love and to share that with other people then working in the Angling industry is a great way to live.

“Getting out into the nature is proven to be good for your health and wellbeing and a great reliever of stress, if you catch a fish it’s a bonus.