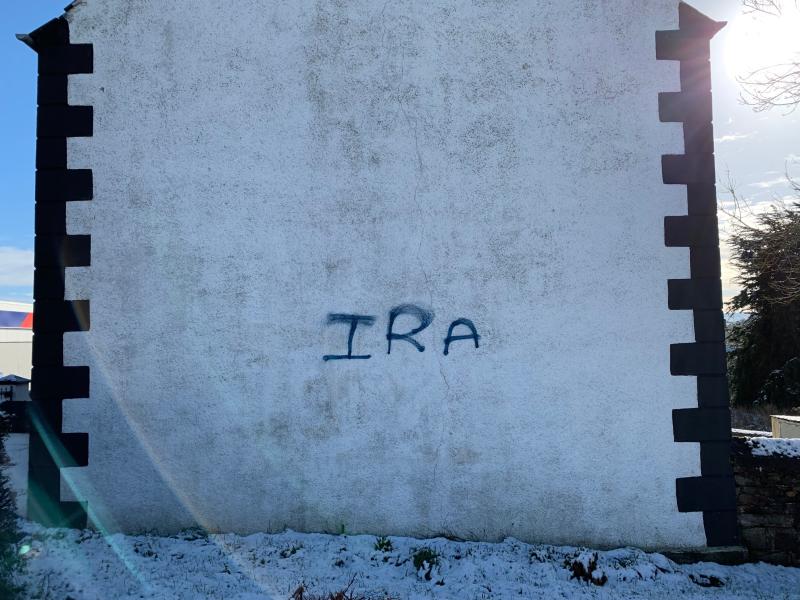 A political representative on Derry City and Strabane District Council has said an outbreak upsurge of vandalism at Protestant churches in rural areas is causing distress to the entire community.

Republican graffiti has been daubed on the walls at Straid Gospel Hall in Claudy which was accompanied by eggs being smashed on the walls of Cumber Presbyterian Church last weekend.

Police have confirmed that they received a report of criminal damage at a church hall on the Glenshane Road in Claudy last Sunday (March 24).

Inspector Tony Moore said:"We received a report shortly after 1.30pm that graffiti had been daubed on a wall of a hall and a nearby road sign.

"We are treating this as a sectarian hate crime. I am appealing to anyone who may have information, or who noticed any suspicious activity in the area to call police on the non-emergency number 101 and quote reference number 723 24/0319."

Earlier this month the PSNI said that were also treating the spraying of graffiti on the Orange hall in Claudy as a sectarian hate crime.

Speaking to the Derry News, Councillor Maurice Devenney who will contest May’s local election as a DUP candidate said: “There has been an increase in republican graffiti in and around the village of Claudy and that’s happening just around two weeks after the incident at the Orange hall.

“But, attacking churches is an entirely different matter and I am calling for this to stop immediately. I think we all believe that churches should be left alone no matter what. They are places of worship where people go to pray and this is stooping to a very low level.”

Mr Devenney also called on his nationalist counterparts from the area to add their voices to his condemnation of the incidents.

“I think everyone needs to condemn this as their silence could be taken as some sort of support for this. I am working with both council and the Department of Infrastructure to get this graffiti removed as quickly as possible.

“They are attacking our cultural identity and now they’ve attacked our churches as well. Do the people doing this even realise or care what happened in Claudy when three car bombs murdered nine people?

“What would judges think about the area if they come in and see the area destroyed with graffiti like this? So, again I am calling on everyone to help put an end to this.”

A spokesperson for Derry City and Strabane District Council confirmed that Council is working with its partners in Transport NI to ensure the removal of the graffiti as soon as possible. CAPTION: Police say they received a report of graffiti being sprayed on a wall at Straid Gospel Hall last Sunday, March 24.
ADVERTISEMENT - CONTINUE READING BELOW