Bloody Sunday: Protests in support of soldier to be charged with Bloody Sunday murders 'an affront to democracy’ 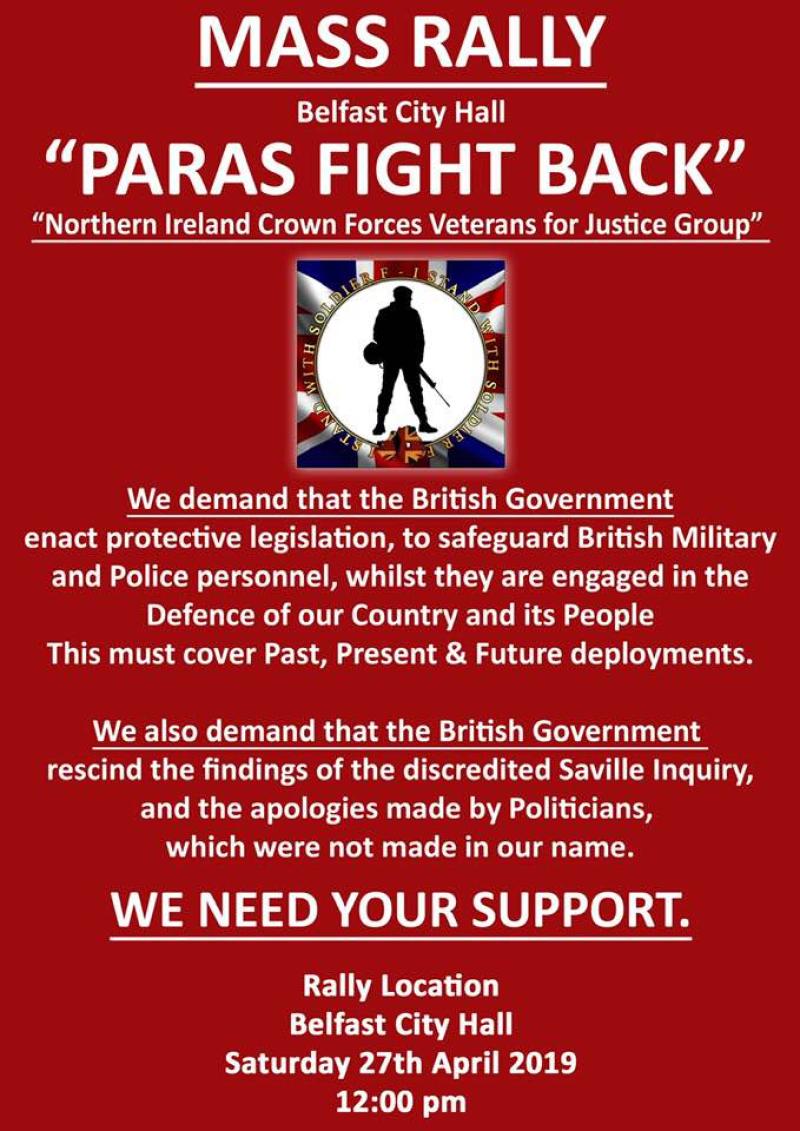 Plans by British Army veterans to mount protests against the decision to prosecute a former member of the Parachute Regiment for murder and attempted murder on Bloody Sunday have been slammed.

Two separate protests have been announced for next month in Belfast following the announcement on March 14 that the man known as Soldier F will be charged with the murders of William McKinney and Jim Wray on January 30, 1972 in the Bogside.

The ex-soldier will also face charges for the attempted murders of Joseph Friel, Michael Quinn, Joe Mahon and Patrick O’Donnell.

A rally under the title ‘Paras Fight Back’ is being planned to take place outside Belfast City Hall at noon on Saturday, April 27. It has been organised by a group calling itself the Northern Ireland Crown Forces Veterans for Justice (NICFVFJ).

A poster placed on the NICFVFJ Facebook page bills the protest as mass rally and is calling on former members of all British Army regiments to attend.

The poster also states: “We demand that the British Government enact protective legislation, to safeguard British Military and Police personnel, whilst they are engaged in the Defence of our Country and its People. This must cover Past, Present and Future deployments.

“We also demand that the British Government rescind the findings of the discredited Saville Inquiry and the apologies made by Politicians which was not in our name. We need your support.”

The Derry News checked with the Parades Commission to see if the proposed protests have been correctly applied for.

In relation to the NICFVFJ demonstration on April 27, the Commission says its remit does not cover this protest because it will converge at a single point rather than moving through Belfast-therefore it is not regarded as a parade.

However, the Parades Commission has received notification of a proposed motorcycle cavalcade through Belfast on Friday, April 12.

The group who have applied have named themselves ‘Rolling Thunder Ride-N Ireland’ and has expressed its intent to drive through parts of Belfast for a two-hour period. If approved by the Parades Commission the motorcycle protest will pass through the heart of Belfast city centre.

A spokesperson for the Parades Commission told the Derry News: “The Commission has received notification for a motorcycle parade by ‘Rolling Thunder Ride-N Ireland’ from Sydenham Road to Stormont via Belfast City Hall on Friday, April 12. The parade is notified for 100 motorcycles, commences at 1pm and disperses at 3pm. The Commission is aware that there may be sensitivities regarding this planned motorcycle parade, which it will consider at its meeting on Tuesday, April 2.”

Kate Nash, whose brother William was shot dead on Bloody Sunday said she believes that the planned demonstrations are being designed to interfere with due legal process.

"My great concern is that these protests are about trying to influence the trials of soldiers and it would be irresponsible to allow these to go ahead.

"I believe this is a deliberate attempt to scuttle the case against Soldier F and that there will be no chance of a fair trial here.

"The Ballymurphy families are in the middle of an inquest process and these so-called protests have the potential to cause major trouble. They are seeking protection having committed crimes and this cannot be allowed to happen.

"It is an affront to democracy for the security forces to be put above the law."

The Foyle MLA said: “The applicants for this demonstration plan to travel through Belfast, passing a number of nationalist areas where civilians were also killed by the British Army.

“Not only is this an affront to the families of Bloody Sunday who have battled for 47 years for truth and justice, it is also an insult to those in Belfast, including the Ballymurphy families and many others, who are still grieving the loss of loved ones at the hands of the British Army.

“The Parades Commission are due to consider this application next week and Sinn Féin will be raising our objections directly with the commission in advance of that.”