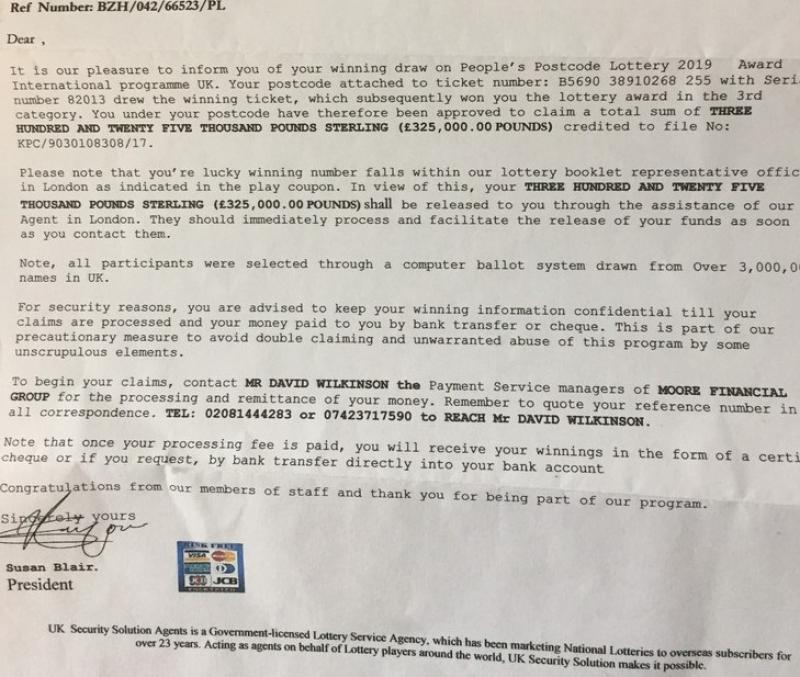 The PSNI has urged people to remain vigilant after the emergence of a postal scam intended to defraud people out of their money by gaining access to their bank accounts.

A letter claiming to be on behalf of the well-known People’s Postcode Lottery is being sent to homes in Derry telling recipients that they have won £325,000.

The People's Postcode Lottery programme does not however operate in Northern Ireland.

The scam is based on paying a ‘processing fee’ to an ‘agent’ of the lottery in order to have the non-existent financial windfall released. In order to pay the fee people will have to give their banking details.

The letter then asks people to make a telephone call in order to claim their ‘winnings’ and tells them to quote the reference number. It states: “For security reasons, you are advised to keep your winning information confidential till your claims are processed and your money paid to you by bank transfer or cheque. This is part of our precautionary measure to avoid double claiming and unwarranted abuse of this programme by some unscrupulous elements.

“To begin your claims, contact Mr David Wilkinson the Payment Services manager of Moore Financial Group for the processing and remittance of your money. Remember to quote your reference number in all correspondence. Tel: 02081444283 or 07423717590 to reach Mr David Wilkinson.”

A quick search of the Companies House website however showed that no firm called Moore Financial Group is registered in the UK.

The Derry News called ‘Mr Wilkinson’ firstly on the landline number provided and quoted the reference number on the letter as requested by the man we spoke to before revealing that it was a newspaper that was calling. The man promptly hung up.

When the mobile telephone number given above was also called, there was no answer from it.

This particular scam appears to have first surfaced in southern England around five years ago but strongly resurfaced in others parts of the UK including Scotland and Wales last summer.

And, in one particular instance of the scam in January this year the fraudsters sent the fake letter to a police Chief Inspector in Perth, Scotland.

PSNI Chief Superintendent Simon Walls said: “Fraudsters will go to any length to scam people out of money and, unfortunately, these fake Peoples Postcode Lottery letters are another example of how scammers will try to dupe people.  “Whilst this is not a common scam at the moment in Northern Ireland we are aware of it. Always be especially wary of any company or individual that contacts you to inform you of a prize win for a competition you have not entered and always remember - if it sounds too good to be true it usually is.

“I can’t stress enough just how important it is to be scam aware because while you think you will never fall victim to a scam, it can happen.  “If you have any concerns about an email or letter you receive check it out thoroughly. Don’t be rushed into responding.  “Advice and information on the latest scams can be obtained by visiting the ScamwiseNI Facebook page or nidirect.gov.uk/scamwiseni. If you feel you have been a victim of a scam call us on non-emergency number 101. “And remember if you can spot a scam, you can stop a scam.”

“People’s Postcode Lottery will never ask for a payment in order to receive your ‘winnings’, and if you don’t already play with us then you cannot ‘win’. If you are contacted either by post, phone or email and you are unsure if it is a scam then do not give out your personal information and contact our customer service team directly on 0808 1098765. It is also worth noting that People's Postcode Lottery only operates within Scotland, England and Wales.”