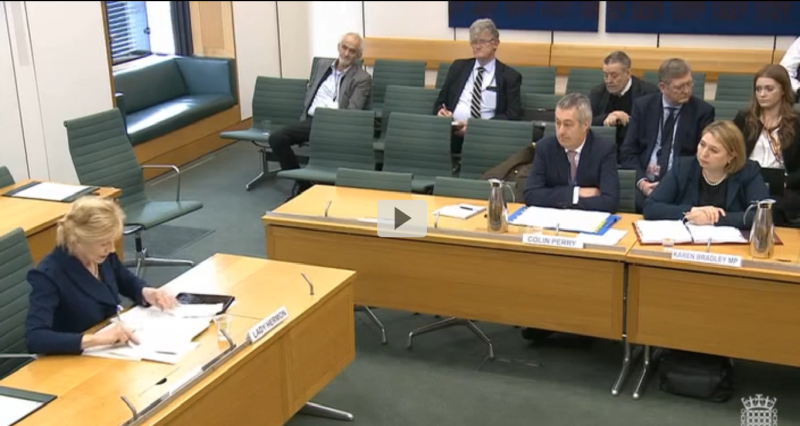 Jon McCourt travelled to London yesterday where he arrived at Westminster just before Karen Bradley was questioned by the NI Affairs Committee about, amongst other issues, the Historical Institutional Abuse Inquiry. During East Derry MP Gregory Campbell challenged Karen Bradley on the issue and made reference to Mr McCourt being in attendance.  He said that the government has looked at the age profile of victims and survivors and “unfortunately, year after year, people are dying and the number of people who may be eligible are dying year on year. “That’s a concern people have and they are looking for some assurance that the government is not shutting down and saying, ‘whatever happens, whatever the outcome is, we’re not going to get involved because it’s not a Westminster responsibility.’” Speaking afterwards, Jon told the Derry News that a couple of friends accompanied him to the evidence session. One of those men, Conor Ryan, was abused in Rubane House, which was run by the Catholic Church run De La Salle Order, as was his younger brother. The 73-year-old man “broke down” as the issue of delays was raised. “That is the toll it is taking on people,” Jon said. “Conor suffers from cancer and his brother, who was also in Rubane House, died from cancer in the middle of the Inquiry.” During the session, Independent Unionist MP for North Down, Lady Sylvia Hermon, also pressed the Secretary of State for Northern Ireland further on the “urgent” need to implement any recommendations from The Executive Office regarding compensation for victims. Lady Hermon said: “You did say any human being would want to make it right, you have the power to make it right.  Time is running against the victims of historical institutional abuse and the head of the civil service indicated that at the end of the consultation he thought you would have a moral responsibility. “We’re talking about human beings here, who have suffered the most appalling abuse, mostly as children, mostly for years and years, who have suffered grievously, there is a moral responsibility on you Secretary of State, there is no-one else. “This is not a step too far for you, this is a step that you could definitely take.  Don’t you know that in your heart of hearts? “Can you indicate a time frame, we can’t have this endlessly strung out.  I want you to attach a sense of urgency to what is an urgent matter that has to be resolved, even if it is interim payments to the victims.  Can you commit that you will look at the recommendations urgently? Can we get those words uttered?” Ms Bradley could not provide a time frame, she did however accept that once received she would look at it as a matter of urgency but said she “won’t pre-judge” and would await the recommendations from Head of the NI Civil Service, David Sterling.
ADVERTISEMENT - CONTINUE READING BELOW