'Disgraceful, sickening and unforgivable': Historical abuse survivors hit out at inaction of NI Secretary of State 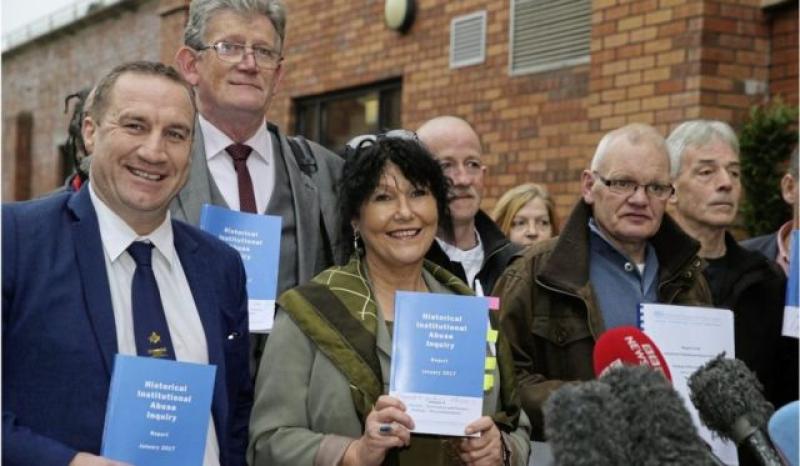 The Chairman of Survivors North West has criticised the “apparent lack of interest” shown by the NI Secretary of State towards victims and survivors of historical institutional abuse. Speaking to the Derry News this week, Jon McCourt of Survivors (North West), said he is frustrated at not just the lack of movement, but the lack of apparent interest demonstrated by British MP and Secretary of State for NI Karen Bradley. In the absence of a functioning Executive, victims, and a member of her own party, have called upon Ms Bradley to action any recommendations in terms of compensation “without further delay”. Draft legislation to establish a compensation scheme for victims came in November of last year - almost two years after the publication of the report by the Historic Institutional Abuse Inquiry (HIAI). The inquiry led by Sir Anthony Hart found widespread and systemic abuse in children’s homes across Northern Ireland.  It covered abuse of children under 18 who lived in children’s homes, borstals, training schools, juvenile justice centres, hospitals and orphanages between 1922 and 1995 in Northern Ireland. At the subsequent public release of the Report, on the 20th January 2017, attended by hundreds of Victims and Survivors of Historical Institutional Abuse, Sir Anthony Hart stated that he expected the recommendations contained in it, would be initiated by November that year – ten months later. Unfortunately, the report could not be endorsed as it was handed to the First and Deputy First Minister 73hrs before the resignation of the Deputy First Minister, the late Martin McGuinness. A consultation process commenced seeking the views of the public which ended on March 10.  The Executive Office (TEO) is analysing all responses received and will prepare a written report on the outcomes for ministers to consider. TEO intends to complete this work by late April to early May 2019. Draft legislation fell “significantly short” of what victims and survivors believe they are entitled to.  Amongst numerous recommendations, campaigners have demanded higher levels of compensation, set at £10,000 rather than the suggested standard payment of £7,500. And they said compensation should not be the same for everyone but instead should reflect the length of time spent in an institution so that those who spent more years of their childhood in an institution should receive more. A number of MLAs don’t believe the Executive will be reformed this year, victims and survivors, as well as the Chair of the NI Affairs Committee, Andrew Murrison, have urged the Secretary of State (NI) Karen Bradley to act “without further delay”. ‘Callous disregard’ Mr McCourt, who suffered abuse at St Joseph’s Children’s Home in Derry where he lived for ten years, is convinced Ms Bradley will not take action and believes it shows a complete disregard for the ongoing pain of victims and survivors. He commented: “That she is "not disposed" to act on anything that had not previously been endorsed by the now defunct Executive is predictable. Without an Executive to initiate that process it is our belief, that the Secretary of State as the Minister ultimately responsible for the North had both the authority and the power to move the process forward. The then Secretary of State, James Brokenshire and his successor Karen Bradley have chosen to do nothing. “It appears that victims and survivors of historical institutional abuse have been hostages to fortune for the last two years, as long as they can be used as pawns to force a coalition of the unwilling around the table to re-form an Executive and functioning government here. “Meanwhile, victims and survivors, many aging and in ill health continue to deteriorate emotionally and physically. By the time the report had been released, Sir Anthony Hart stated that a twelve people who had engaged with the Inquiry had died from the outset of the process, others have died since then.” He continued: “Yet despite the urging of Sir Anthony Hart, the leaders of the five major political parties at Stormont, David Sterling (Head of the N.I. Civil Service) and others here and at Westminster, both Secretaries of State have opted to revert responsibility for the implementation of the recommendations and the question of redress to a non-existent Executive. “This is at very least a moral dereliction of a duty of care and responsibility, or a callous disregard for some of the most vulnerable people in our society. “The Secretary of State has intimated that that position will not change and she will not be implementing any legislation that was not endorsed by the previous Executive in the absence of direct rule. “Even in the event of direct rule being imposed, the possibility is that she will then only "give consideration" as to what action she will take, without any commitment to deliver on the Hart Recommendations. “The situation is disgraceful, the impact is sickening and the disregard of the ongoing pain and trauma is unforgivable.” Photo: Jon McCourt (second from left) Chairperson of Survivors (North West).
ADVERTISEMENT - CONTINUE READING BELOW