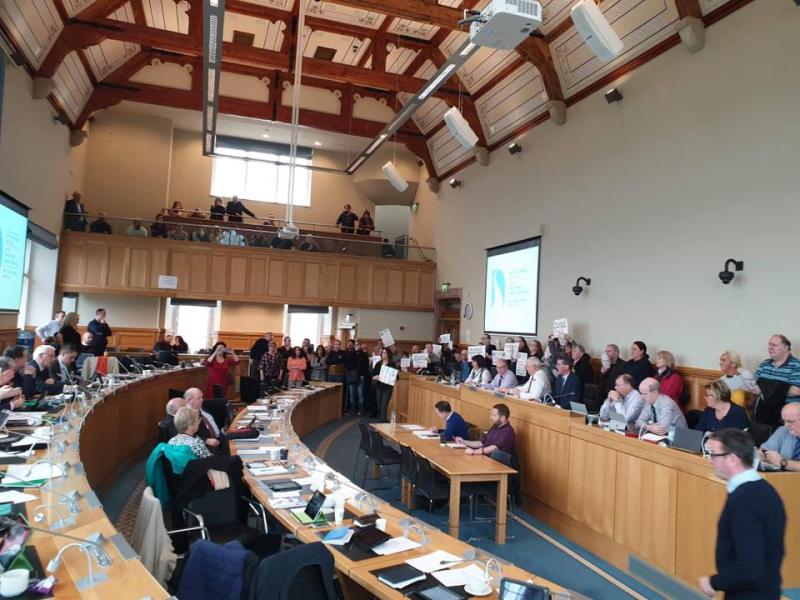 A new activist group staged a protest in the council chamber this week to demand action against cuts which they say are “destroying lives” in Derry. The group, Action Against Cuts, caused the final meeting before the upcoming local elections to be suspended for a period of time. More than fifty members of the group held the peaceful protest against welfare reform to gauge the views of incumbent councillors and encouraged members of the community to scrutinise candidates in the run-up to the May 2 election. Protesters left the public gallery shortly after proceedings began at 4pm on Tuesday.  Some donned masks of the actor Dave Johns who played the titular character in the film 'I, Daniel Blake'. Current Mayor of Derry City and Strabane District Council, John Boyle, suspended the sitting immediately after the protest began but the group stood behind the Mayor and council officials shouting slogans such as “smash welfare reform!” Ann Donnelly, a trade unionist and spokesperson for the group, read out a statement which asked elected representatives to come to the front of the chamber and stand in solidarity with the group in opposing the cuts and the devastating effect they were having on the local community. She said: “This peaceful protest will only be holding up Council’s important meeting for 30 minutes and we are not looking to disrupt Council’s proceedings further.  We are here today on behalf of Action Against the Cuts, a new group of community activists and individuals who are outraged at how our communities are being devastated by so-called Welfare Reform or Austerity. “The Cuts are destroying the lives of individuals, families and whole communities across this city and district.  A recent public meeting at the Maldron Hotel saw more than 200 people listen to the stories of some of those most impacted to date and the feeling in the room was one of anger and the need to take direct action against the cuts. “The film I, Daniel Blake showed how one man in England was devastated by the cuts.  This is now happening here at an alarming rate and we will not stand for it. It is the corporate position of this Council that it is opposed to all cuts. “We would urge you to join us in protest by crossing the barrier and putting on a Daniel Blake mask to show your solidarity with those who are being most directly affected by these cuts in this Council area.  Help us to fight back!  We cannot sit idly by while people are being left for months on end without money and unable to feed their families.  Fight back now!  We are all Daniel Blake.” Support Following the statement, Independent Councillors Gary Donnelly, Sean Carr, Paul Gallagher, Warren Robinson and Darren O’Reilly were the first to cross over and stand in support with the group.  They were followed by the SDLP, then the UUP and finally Sinn Fein. Members of the DUP remained seated and shouted that they felt intimidated and bullied by the protest and, despite the Council’s corporate policy to oppose the cuts, they would not be supporting Action Against Cuts or the message the protesters read out. People Before Profit representatives were in attendance to support a motion for workers in the Supporting People Programme and afterwards released a statement saying they stand in solidarity with the protest. “We are all Daniel Blake.  Vicious welfare reforms are causing hardship to communities right across Derry.  We're united with everyone who wants to see Universal Credit and PIP scrapped; Capita removed from any role in PIP assessments and the Bedroom Tax abolished. “A clear message was sent to the parties responsible for bringing in welfare reform here - the DUP, Sinn Fein and Alliance. They should have listened to the warnings we and others gave about the dire consequences that would result and refused to vote in these vicious Tory policies,” a spokesperson added.
ADVERTISEMENT - CONTINUE READING BELOW