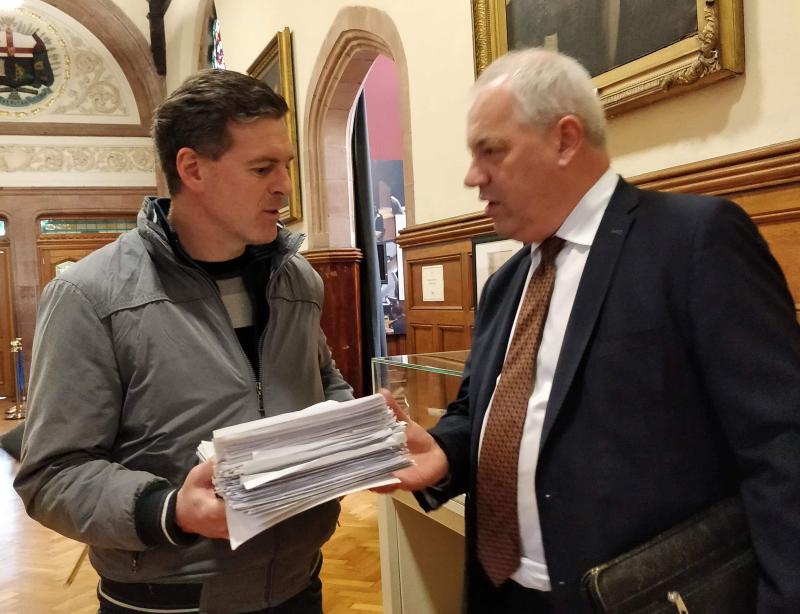 Thousands of letters were handed over to the head of Derry City and Strabane District Council this week in protest against welfare reforms.
People Before Profit Foyleside candidate  Shaun  Harkin attended the Guildhall on Tuesday where he delivered thousands of protest letters to the DCSDC Chief Executive officer John Kelpie ahead of the current Council's final meeting.
People from across Derry signed the letters calling for welfare reforms to be scrapped.
Mr Harkin commented: "The Council isn't responsible for the implementation of welfare reforms but opposition to welfare cuts is its corporate policy. Therefore, the Council has a role to play in pushing for these policies to be scrapped.
"The Council must be aware of the strength of feeling from communities across the city about the damage these policies are causing to many thousands of people."
He added: "The Council needs to be an advocate for everyone in Derry and Strabane who has been hurt by benefit cuts. From a strategic point of view, the Council must be aware of the greater levels of deprivation here and what it will mean for services.
"It is unacceptable that the for-profit company Capita, operating out of a building right next to the Strand Road Council offices, should have any role in carrying out medical assessments.
"Council should be on the front foot advocating for communities on the receiving end of policies few support. For example, Council officers should grill Capita officials on its assessment methods.
""We will continue to campaign until these policies are undone."
Photo: People Before Profit representative Shaun Harkin delivering thousands of protest letters to Council Chief Executive officer John Kelpie on March 26.
ADVERTISEMENT - CONTINUE READING BELOW