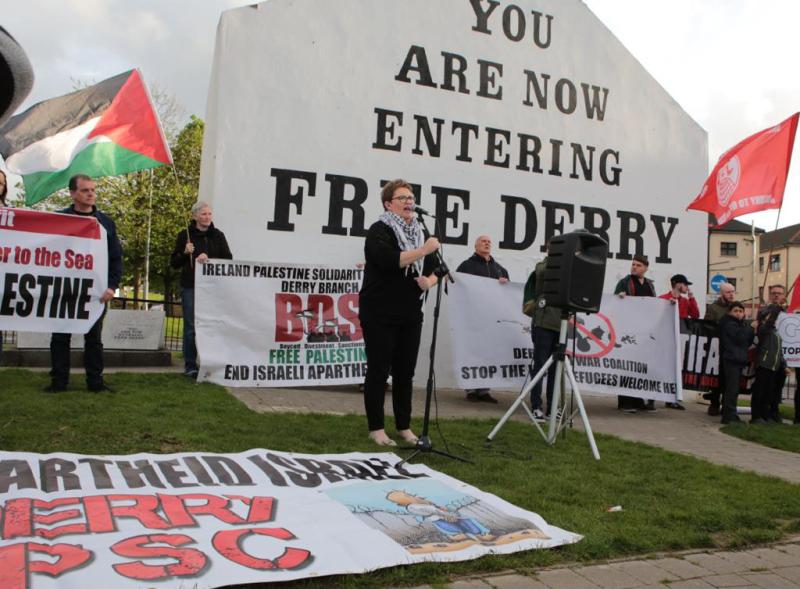 A rally will take place at Free Derry Corner tomorrow to mark the first anniversary of “historic protests for justice” in Palestine and the 43 rd anniversary of Palestine Land Day. The Derry Branch of Ireland Palestine Solidarity Campaign will host speakers at the rally including Independent Councillor Gary Donnelly, Shaun Harkin of People Before Profit, Sinn Féin Councillor Sandra Duffy and SDLP candidate in the upcoming election, Rory Farrell. A year has passed since the “Great March of Return” protests started in the Gaza Strip on March 30, 2018.  Their calls for Israeli authorities to lift their 11-year illegal blockade on Gaza and to allow Palestinian refugees to return to their villages and towns have not been met. According to Gaza Health Ministry, more than 250 Palestinians have been killed during the Great March of Return, including six women, and thousands have been injured. Many of the casualties are expected to be left with permanent disabilities and emergency funds have been set up to address the rehabilitation needs of those injured at the border demonstrations. Human rights organisations have condemned Israel’s “shoot-to-kill-or-maim” policy. A report published by the UN Commission of Inquiry in February stated that Israeli forces may have committed war crimes during protests in Gaza last year, including deliberately firing on Palestinian civilians. Amnesty International said the report paints a “damning picture of Israeli forces who deliberately shot at children, health workers, journalists and people with disabilities, demonstrating a cruel and ruthless disregard for international humanitarian law.” Land Day, March 30, is also an annual day of commemoration for Arab citizens of Israel and Palestinians of the events of that date in 1976 in Israel. In 1976, in response to the Israeli government's announcement of a plan to expropriate thousands of dunams of land for state purposes, a general strike and marches were organised in Arab towns from the Galilee to the Negev. In the ensuing confrontations with the Israeli army and police, six unarmed Arab citizens were killed, about one hundred were wounded, and hundreds of others arrested. ‘Freedom’ On Friday 29th March at 7pm the Derry Branch of Ireland Palestine Solidarity Campaign (IPSC) would like the public to join them at Free Derry Corner to respond to the call from Gaza to mark the first anniversary of the “heroic” Great March of Return and 43rd Anniversary of Palestinian Land Day. IPSC Chairperson, Catherine Hutton said: “Since 30th March 2018, each Friday, for a whole year, Palestinian refugee protesters have been marching to the fence in Gaza that separates them from the homes their families were driven from in 1948. “These protesters have sacrificed so much to ensure the world hears their call for freedom, justice, equality and return. Over 260 people have paid the ultimate price, with many thousands more being injured as Israeli occupation forces fire into crowds of unarmed demonstrators. “These protests were inspired by the events of Palestinian Land Day when, on March 30th 1976, Israeli police shot and killed 6 unarmed protesters and wounded hundred more in protests against land theft – an anniversary that has been marked every year since.” She added: “Sadly, the international community, including the UK & Irish governments, continue to refuse to act to sanction Israel in any manner. We ask you to join with us in this vigil to mark the first anniversary of these historic protests for justice for Palestinians. “We look forward to seeing you there.”
ADVERTISEMENT - CONTINUE READING BELOW