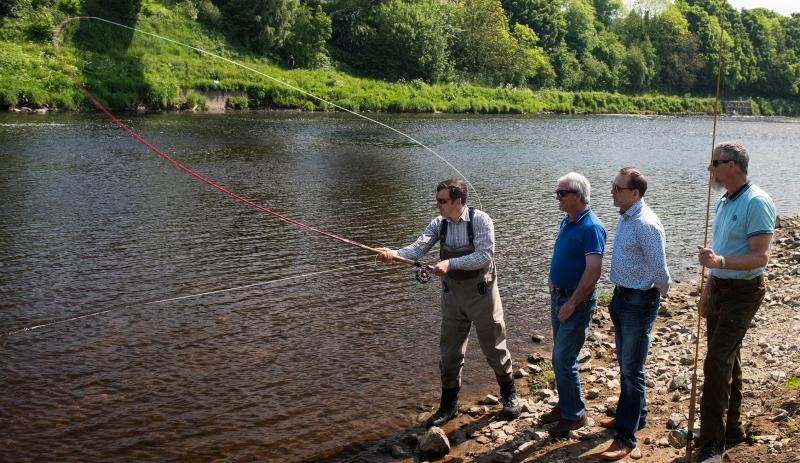 The biggest event on the local angling calendar looks set to attract hundreds of visitors this weekend when the North West Angling Fair is hosted in and around the spectacular setting of Castlederg Castle. The family friendly event hosted by Derry City and Strabane District Council is free admission and is set to bring together a host of the UK and Ireland’s top fly dressers, casters and top angling specialists. The fair will be open from 10am – 5pm each day of Saturday 6 and Sunday April 7 and will feature appearances and demonstrations as well as interactive opportunities for the public to get involved. The fair will host stalls from retailers and fly tying demonstrations while outside on the Derg River some of the best casters in the world will impart their wisdom through demonstrations. A special youth element entitled CATCH (Community Angling Training and Coaching Hub) will be hosted by the Loughs Agency where experienced and professional coaches will be on-hand to train new, novice and experienced young anglers in game, coarse and sea angling. Looking ahead to the event, Mayor of Derry City and Strabane District Council, Councillor John Boyle, encouraged local people to take advantage of the world class event on their doorstep and noted that it will attract thousands of visitors to the Council area. “I’d like to congratulate the Festival and Events team at Council for assembling a stellar line-up of special guests and an exciting programme of activities for the 2019 North West Angling Fair,” he said. “This is the first time the fair has come to Castlederg which will allow us to showcase our angling offering not only to visitors to our Council area but also to local people who may be considering taking up fishing as a hobby. “The programme is family orientated and allows people of all ages to get involved and learn more about the art of angling and I’d encourage as many people as possible to come along and sample what it has to offer.” Festival and Events Manager at Derry City and Strabane District Council, Jacqueline Whoriskey, noted the Fair has something to suit all levels and tastes. “We are delighted to once again host the North West Angling Fair and bring it to the spectacular surroundings of Castlederg Castle, using the grounds of the St Eugene’s GAC and the Derg River,” she said. “Some of the biggest names in the angling world will be in attendance and there is a wide range of activities and demonstrations to choose from. “The event is free of charge but people can buy the best equipment and supplies for their fishing needs at the trade stands. “We are particularly excited about the CATCH Hub, hosted by the Loughs Agency, that will help inspire the next generation of anglers through short workshops covering casting, netting, fish identification, rover invertebrates, bait, lures, fly tying and safety and enable participants to achieve the CAST Angling Starter certificate.” Among the high calibre lineup in attendance at the fair will be well-known multiple world fly casting champions Hywel Morgan who will be demonstrating angling techniques and giving expert advice along with the likes of Robert Gillespie, Michael O’Kane and Stevie Munn. The exhibition area will offer the public the chance to browse and shop around for equipment from a wide range of local traders including Rodgers Fishing Tackle, The Bridge Gun and Tackle, River Mourne Gun and Tackle and The Great Outdoors. The ever popular Fly Tyers Row area will afford visitors the opportunity to watch fly dressers practice their craft and will include demonstrations from acclaimed tier Arthur Greenwood and local youngster Laoi Coyle. The full lineup for the North West Angling Fair is available at www.derrystrabane.com/anglingfair. CAPTION:Local anglers get personal instruction from three times World Spey Casting Champion Gordon Armstrong from Inverness, Scotland demonstrating his skills on the River Mourne at Strabane during the NW Angling Fair last year.
ADVERTISEMENT
Advertise with Us
ADVERTISEMENT
Advertise with Us
ADVERTISEMENT
Advertise with Us
ADVERTISEMENT
Advertise with Us