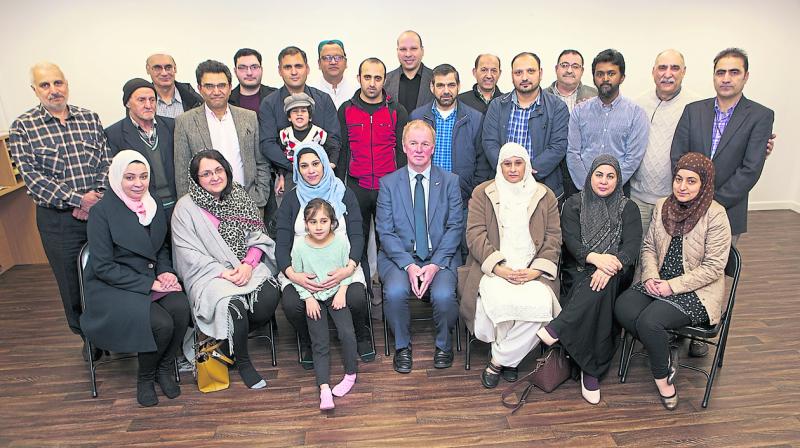 Derry’s Muslim community, with the support of the people of the city, have presented messages of condolence, love and solidarity to the New Zealand Consulate in the wake of the terror attack that claimed the lives of 50 innocent people at prayer. The North West Islamic Association (NWIA) held an event asking the people of Derry to "Stand in Solidarity" with the Muslim community following the horrific 15 March terror attack by a white supremacist in Christchurch, New Zealand. The attack claimed the lives of 50 people, including the youngest victim, three-year-old Mucad Ibrahim, and injured 42 others. Messages of hope, love and unity were shared by the people of Derry from all faiths and displayed on a wall of condolences. The poignant messages were presented to Sinclair Stockman, New Zealand Consulate in Northern Ireland, from the Muslim community alongside the wider community in Derry. Zahid Bahli, chairperson of the North West Islamic Association, said they wanted to remember the victims and those affected by the atrocity as a whole community in humanity, harmony, unity and friendship. Speaking to the Derry News after Friday's event, Mr Bahli said: “We have a small Muslim community in Derry and for the last couple of weeks, the horrific news of what happened in New Zealand was all over the media,” he said. “It was so tragic; I suppose everybody wanted to do something in terms of support to show our unity and also to give a message of unity from the whole city. It’s humanity that comes to the top; religion, race, nationality – none of these things matter. You can’t kill people because they are of a different religion, race or nationality – the important message for everybody in the community is it’s about humanity and we should be living in harmony with each other and different communities, we have to send a message of love and peace. “We are far in another corner of the world but it is important to show these people that there are people in this city who are with them and are showing solidarity. We made an open call and it was good to see all people of all ages and nationalities and you can see chart everybody wrote something in seven languages and this shows that people are together with each other and there is harmony in society and that’s the most important message we have to deliver and to show that we feel it in our hearts for the people in New Zealand who lost their lives. We are all human beings. “One of the victims was from the same town as I am from in Pakistan, he grew up and did his studies and PhD and was ,lecturing in New Zealand, he and his son were going out on a Friday, and his son was getting married in a few weeks’ time, and they both got shot and they both never came back. “Another man who died and he was graduating and his mother visiting for his graduation; he was supposed to be coming back to take his mother to New Zealand. It was sad, it’s heart-breaking.” “The good thing was, that one victim’s wife when somebody asked her what she thought about the guy who killed so many and she said, ‘I feel sorry for him because his heart was full if hate and I feel proud that I can live my life with love in my heart and he will live the rest of his with hate in his heart’. “We wanted to get people together to remember the victims in unity and friendship as a whole community.” Standing together

Sinclair Stockman, New Zealand Consulate in Northern Ireland, attended a short ceremony before putting his own tribute on the wall of condolences at the North West Islamic Association. “Today is about being connected with and assuring, not reassuring, the Muslim community that in New Zealand we seen it as an attack on New Zealanders, the Muslim population is New Zealanders, they’re not apart. Through the leadership of the Prime Minister, she has made it very clear that the people that live in the country – they are of us," he told the Derry News. “Sometimes here with our local Troubles, some people think that some people aren’t of us but you may not agree with their politics, but they are from here. “The horror of this incident reminded me of the lunacy of the bomb that was left here in Derry outside the courthouse and those kids walking down the street... who would have been to blame? It’s that moronic evil, it’s fascism – fascism didn’t die after Hitler, Hitler was only one version of it.” Mr Stockman said the gesture of unity from the Muslim people of Derry and Derry natives showed strength in the face of such evil. “It helps have that thread of bonding and show that an attack on any one is an attack on me,” he said. “We should be standing up and standing together without thinking about it. It is important that we say that we stand with people that are under threat, irrespective of where they come from or where they are – as part of our Irishness that’s who we are.” PICTURED ABOVE: New Zealand Consulate, Professor Sinclair Guillaume Stockman, pictured with Muslim families during a visit to the North West Islamic Community Centre in Derry.