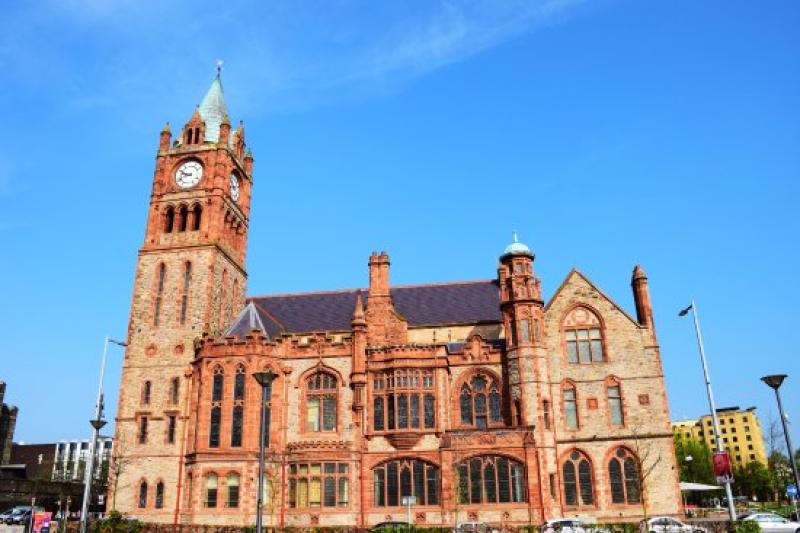 Long Tower Youth Club in Derry yesterday cancelled an event to be held at Derry’s Guildhall following a notification from a republican party that they would stage a protest at it.

The event, which stated that it would involve representation from the PSNI, local political representatives, ex-combatants and community workers drew criticism from Saoradh because of the anticipated presence of the police.

A letter issued by the youth club to parents of its members on March 26 gave advanced notice of the youth conference stating: “Your child has been taking part in a number of issue-based programmes over the last few months as a member of one of the city’s many youth centres. As a part of these youth work programmes, young people have been exploring issues which are directly related to young people’s lives.”

However Saoradh, a republican political party that denies any connection to the New IRA, said they would protest at the event. In a statement, a spokesman for the group said: “Following the revelation that British Crown Forces are to be present at a conference facilitated by Long Tower Youth Club, the Revolutionary Party, Saoradh have opted to protest at the event.”

The group added that they had been contacted by “a number of concerned parents” regarding the event and after “internal discussions” came to the agreement “that we will hold a protest and expose Crown Force harassment of children.”

Another part of the statement said: “Ongoing actions from British Crown Forces towards the youth of our city must be highlighted and challenged. Less than a year ago youths from our communities, youths from the Long Tower Youth Club witnessed this same British Force attack young people with plastic bullets in the Bogside.”

In a statement the Long Tower Youth Club said: "Youth work is about providing the platform for young people to engage directly with those who they have issues with.

"This has always been the basis of youth work, at no point do our youth workers allow their personal values to influence the work they do or how they go about their jobs.

"Youth work is about adopting an undue positive regard approach so that we take young people at face value and not judge them.

"When they present with an issue such as policing then our youth workers advocate on their behalf and encourage them to develop their communication skills personally, socially and politically, so that they can engage directly, on their terms with those who they perceive to be the issue."

Representatives of the youth club said they attempted to discuss the issue with Saoradh but were unable to do so and left with no choice but to cancel the event.

In a statement the Long Tower Youth Club's management said: "The whole conference was focused on providing young people with direct dialogue so that their voices can be heard and their views expressed on stop and search, house raids and policing in the community.

"This was never about going into a room and the police talking down to young people, it was about having the hard conversations and meaningful dialogue so that our members can take the journey of developing a community where they can develop a deeper understanding of each other and the roles they play within the community.

"The management of Long Tower have tried to engage in dialogue with the particular organisation who have a issue with this event as they have vowed to stage a protest, this request for engagement has been refused. Therefore we have no option but to cancel this event."

However, in an updated statement a spokesman for Saoradh said: “The Revolutionary Republican Party, Saoradh welcome the cancellation of a youth event tomorrow that had the inclusion of British Crown Forces attending.

“As we previously stated, Saoradh had opted to protest the event after liaising with local parents following the revelation that Crown Forces were to be present.

We understand the need and desire of young people within our communities to engage in peer related conferences, however parents and youths involved with Long Tower Youth Club expressed particular concern to Saoradh in regards to the presence of Crown Forces.

“In response to the recent statement issued by Long Tower Youth Club citing their reasons for cancelling the event, Saoradh must respond publicly.

“Saoradh were engaged in dialogue with representatives from Long Tower Youth Club via a community worker acting as a mediator this evening as they attempted to halt our planned protest.

“We expressed a keen desire to meet with their representatives on the basis they cancelled the event first, otherwise our protest would go ahead as planned.

“For Long Tower Youth Club to state that we refused to engage with them is completely false. We still seek engagement to relay not only our concerns but the concerns of those who attend their club and that of their parents.

“Saoradh have publicly challenged a number of schools, youth clubs and other organisations within our communities that have attempted to accommodate British Crown Forces and will continue to do so.

“As previously stated; Saoradh will not be found wanting when it comes to challenging those who endorse and impose this unwanted British Force upon our communities.”

The cancellation of the event was criticised by both Sinn Fein and the PSNI.

Sinn Fein MLA for Foyle Karen Mullan said: "It is disgraceful that a youth organisation seeking to provide a positive platform to young people should be forced to cancel it due to the actions of Saoradh.

“The fact that Saoradh refused to even engage with the youth club is typical of their failure to rationalise or defend their own actions.

“They should withdraw the threat to protest and allow the youth club to get on with the positive work they are doing within this community every day of the week.”

And, PSNI Supt Alan Hutton said: “This event was a fantastic opportunity for young people to express their views on issues that matter to them to a range of partners and it is unfortunate that the whole day had to be cancelled.

“Our young people’s voices need to be heard.

“It would have been a welcome opportunity for young people to meet their local police officers, ask us questions, share their concerns and frustrations and to get to know us and the job we do.”

CAPTION: The youth conference had been scheduled to take place at the Guildhall on Wednesday, April 4.
ADVERTISEMENT - CONTINUE READING BELOW