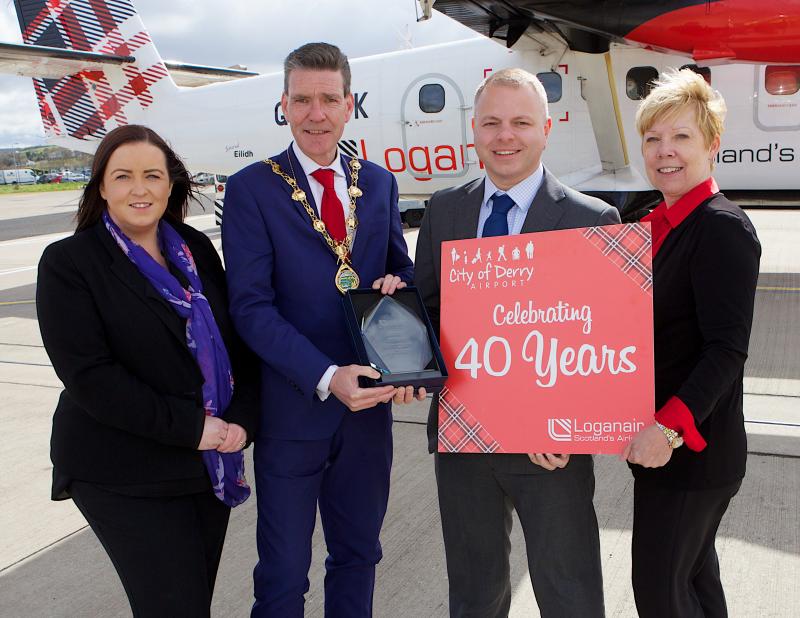 The anniversary was commemorated with Loganair’s Managing Director, Jonathan Hickles, and Commercial Director, Kay Ryan, travelling from Glasgow to City of Derry Airport on the original, 19 seater, Twin Otter aircraft that was used for the inaugural 40 years ago.

This was followed by festivities and Scottish-themed entertainment at the airport in honour of the Scottish heritage of the airline and the historic Glasgow route.

Jonathan Hinkles said: “It’s fitting to celebrate such a memorable event in the airline’s history by taking a Twin Otter once again to the skies above Derry.

“Loganair has a long relationship with the airport, one we’ve been pleased to grow over recent months. Glasgow and Derry have ties which go back even further and this 40-year-old airlink helps support these connections.”

Charlene Shongo, Airport Manager at City of Derry Airport, added: “We are so proud to have Loganair, who have been such an important and symbolic part of the history of our airport, back at the heart of our modern commercial operations.

“Loganair operate the current Glasgow route, which is available at peak times five days a week.  Loganair have also recently been appointed to operate our PSO service to London Stansted, offers 13 departures per week with fares starting at £39.99 per person one way.

And of course, we are absolutely delighted that the Scottish airline have recently launched a new daily service to Manchester which will commence operations on May 24 with fare prices starting from just £39.99 per person one way. The new Manchester service fantastic news for the Airport and for the North West as it provides vital connectivity to one of the main hubs in the UK and creates an opportunity for onward connectivity to international destinations”.

Mayor John Boyle commented: “I am delighted to have the opportunity to celebrate the long-standing relationship between Loganair and City of Derry Airport which dates back to 1979.  “In 2019 they remain a key partner for the airport, offering frequent and reliable connectivity to London, Glasgow and soon Manchester for local and visiting passengers.  “I would like to thank Loganair’s Managing Director Jonathan Hickles and Commercial Director Kay Ryan for their continued commitment to serving our region and their airline’s pivotal role in the 40-year history of our airport.”

Loganair provide an all-inclusive fare system across all routes operated from City of Derry Airport which allows 20kg hold baggage and 6kg hand luggage to fly for free, as well as the provision of complimentary refreshments on board, so passengers can be rest assured of a stress-free travel experience.

In addition, discount is available on child fares and frequent flyers can benefit from Loganair’s ‘Clan Loganair’ loyalty programme where they are awarded with flight points that can be used towards a flight of choice.

Mrs Shongo concluded: “City of Derry Airport is a vital piece of transport infrastructure and is the airport of choice for the North West of Ireland, offering both convenience and excellent customer service. I would encourage all travellers to ‘Fly Local and Choose CoDA’ when making future travel arrangements.  We have fantastic facilities on our doorstep, and it is essential everyone takes advantage of their local airport for travel plans when possible.”