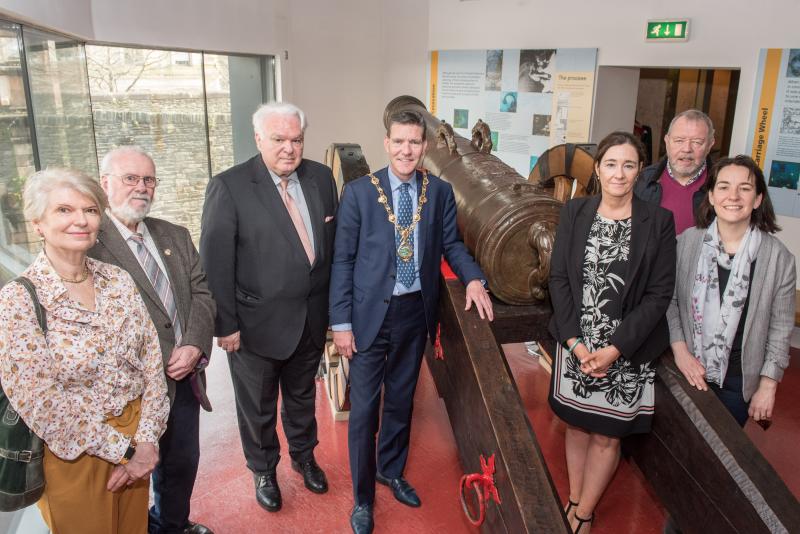 The tour of the Tower Museum by the Spanish Consul General and his wife followed their attendance at an international conference in Ulster University’s Coleraine campus on Friday entitled ‘The Invincible Armada's Presence in Ireland: New Historical, Archaeological and Literary Interpretations.’

Mayor of Derry City and Strabane District Council, Cllr John Boyle said: “It was great to see Miguel Ángel and his wife take time out of their busy schedule to visit our amazing ‘Armada Shipwreck’ exhibition.

“Indeed, this stunning exhibition tells the story of one of the largest ships in the Armada Fleet, La Trinidad Valencera, which foundered in Kinnagoe Bay just along the north coast of Donegal, during a violent storm in 1588.

“Through its extensive artefacts and interactive displays, it really is a fascinating place to learn about the Spanish Armada and the history & culture of our city and its hinterland.”

Roisin Doherty, Curator with Derry City and Strabane District Council, who hosted the tour of the exhibition, added:  “The international conference organised by Ulster University  featured a series of academic lectures from renowned national and international specialists on the Spanish Armada and its legacy in Ireland and the British Isles.

“It was therefore fitting that following the conference a delegation including the Spanish Consul General were able to take time to visit the Armada Shipwreck exhibition.

“The Spanish Consul General and his wife were clearly impressed by our extensive displays over five floors of the museum – as well as details of the painstaking work involved in recovering the ship’s secrets provided on the day by Dave Atherton, a diver from City of Derry Sub-Aqua Club.

“Indeed, both Miguel Ángel and his wife paid a warm tribute to those who recovered and conserved the pieces from La Trinidad Valencera – including little wooden artefacts, such as a comb, or pieces of tent cloth, silk and embroidered material which have survived with expert conservation.

“I would therefore also like to take this opportunity to encourage everyone throughout the City & District to visit the Tower Museum and take full advantage of this ‘real gem’ that we have on our doorsteps.”