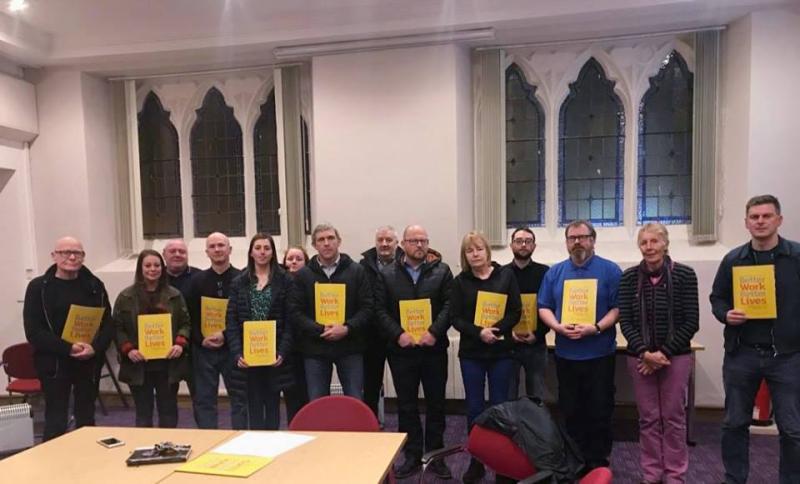 Bosses in Derry have been formally “put on notice” by the Derry Trades Union Council following the election of a new board. Members of the Derry Trades Union Council (DTUC) held its Annual General Meeting on April 4 to elect new officer positions for the year ahead. The newly elected Chairperson of Derry Trades Union Council, Niall McCarroll, took over from Liam Gallagher who held the post for ten years. Mr McCarroll is an active member of Unison Community Branch trade union spoke afterwards: “I take this position knowing the responsibility and historical weight it carries,” he said. “But also knowing the time has come to bring the fight directly to the establishment. “Workers expect strong leadership and unflinching solidarity through a radical fighting trade union. The DTUC will deliver this for workers, we will fight for equality and reach inside workers homes bringing hope and justice. “Those bosses in Derry who think they can continue to operate by controlling hope and prosperity whilst they live lavish lifestyles have now been formally put on notice.” Mr McCarroll also thanked out going post holders Liam Gallagher, Natalie Fleming and Daisy Mules for their years of dedicated work in building the DTUC and the impact their involvement has made to both the wider trade union movement and working class communities. “We will continue that activism to challenge inequality, poverty and the rot of corporate greed created through capitalist ideology,” he added. Alongside Mr McCarroll, who was elected as the DTUC chairperson were John Black of NIPSA was re-elected as Vice Chairperson, while Goretti Horgan from UCU and Samantha Bronxe from Unison, Derry Education were elected as Secretary and Treasurer respectively. This year’s DTUC AGM was also addressed by Owen Reidy of the Irish Congress of Trades Unions, who informed those in attendance of the ongoing Trade Union Movement's 'Better Work - Better Lives' Campaign.
ADVERTISEMENT - CONTINUE READING BELOW