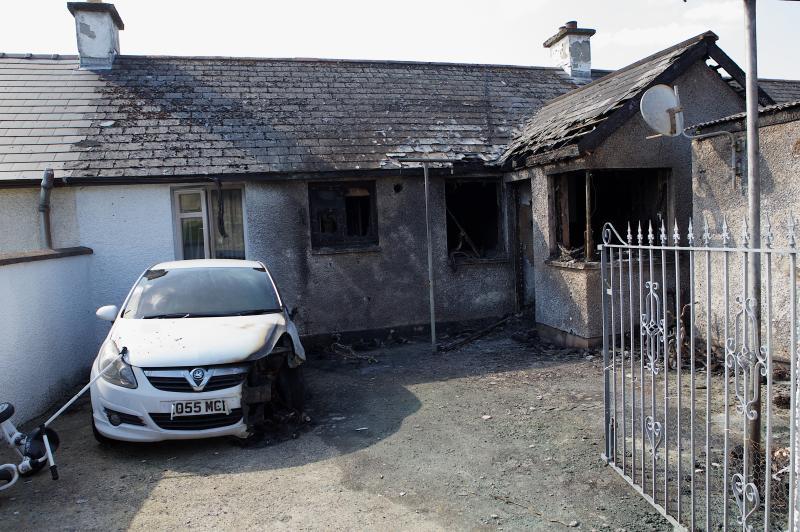 The son of a pensioner whose house was seriously damaged in an arson attack in the Shantallow area on Tuesday has said his mother has been left to seek alternative accommodation from the Northern Ireland Housing Executive.

The woman's first action was to alert her neighbours after she discovered the back of her home at Greenhaw Avenue had been set alight at around 8.30pm on April 9.

Police have confirmed that the source of the fire came from bins that were set alight at the rear of the bungalow spreading flames that ignited an oil tank, which in turn then spread through the entire property.

In her late 60s, the pensioner was treated for shock at the scene.

Speaking to the Derry News, the son of the woman, who did not wish to be identified,  said they went to the house on Wednesday in an attempt to salvage the remnants of her belongings.

“I am just in total shock. I couldn’t believe it when I saw it. We actually found out about it when my sister was tagged in a post about it on Facebook.

“We then found out that some young people had been around the back of the houses. My mother has lived there around 20 years and it’s a closely-knit community and the people there look out for each other,” he said.

Asked about how his mother felt about what had happened to her home the man continued: “She’s still in shock, she’s always helped people out. She worked at Dove House and at the Northern Ireland Housing Executive finding homes for homeless people.

“Her first thoughts were to alert her neighbours which is highly commendable for her. In the middle of it all she took out the TV remote control thinking it was her phone. She lost her twin brother last summer and hasn’t been feeling that well since.”

The pensioner’s son also revealed that his mother was yesterday speaking to the Northern Ireland Housing Executive in an attempt to find alternative accommodation whilst a damage assessment was being carried out on her home.

The Northern Ireland Fire and Rescue Service has confirmed that a fire investigator will also examine the scene and PSNI forensics officers also sifted through the damaged property.

And, asked what his thoughts on those responsible for the fire were, the woman’s son told the Derry News: “They just need to have a good hard look at themselves and see what happens when they do something like this. I definitely hope they are brought to justice.”

A strong smell of smoke was still apparent throughout the small row of terraced bungalows in the Shantallow area on Wednesday morning following the attack.

Police later appealed for any witnesses to the incident to come forward. The PSNI said they received a report of arson and confirmed the fire began when bins were set alight at the rear of the property and the flames then spread to a nearby oil tank.

The PSNI added that there is also an ongoing investigation into a possible link between the fire at the house and damage to a car parked on the same street.

Severe scorch damage was apparent at both the back and front of the home and all four of the neighbouring homes had their windows and doors open in an effort to rid the properties of the smell of smoke.

PSNI Sergeant Swanson said: "At around 8.30pm it was reported that a number of bins were alight spreading to a nearby oil tank at the back of a house in the area, causing it to go on fire.

"The fire then spread to the house, causing substantial damage to the property and neighbouring homes. A woman in her 60s who was inside the property at the time of the incident managed to escape. She was treated for shock at the scene. Northern Ireland Fire and Rescue Service attended the scene and dealt with the fire. There were no reports of any injuries.

"We are also investigating a possible link to damage caused to a car parked in the Greenhaw Avenue of Shantallow sometime between 9.30-10.30pm. It's believed a slate was thrown through the rear window of the car causing damage to the vehicle."

Another resident of Greenhaw Avenue said that the victim of the attack is the best neighbour possible.

The woman, who also did not want to be identified, told the Derry News that the victim of the arson attack was actually the person who alerted her to the fire.

“She was standing at the door shaking and said they set fire to her bins.  Her bins were sitting close to her oil tank so they could have reached over and set fire to them. The fire brigade or police wouldn’t let us into the house.

“We have got a bit of damage, black marks on the carpet from the smoke, but it’s nothing that can’t be fixed. We were standing outside freezing and we were watching our granddaughter who is only two and in the end we had to stay in my son’s house overnight.

“I think we were very lucky that the fire didn’t spread this way. I don’t know how the fire brigade got in there to put that fire out. The back lane there is very narrow.

“She’s very lucky that she got out. She told me that she had got up to make a cup of tea and saw the fire and it must have already been spreading at that stage. She's a pensioner that lives there on her own-she's the best neighbour you could ever get. She was more worried about the neighbors houses, but nobody died so that's a good thing.

“There was some trouble around here a long time ago, but not for around 20 years.

"A lot of debris from the fire came over the houses into the front. But, it could have been a lot worse than it was."

The Northern Ireland Fire and Rescue Service (NIFRS) later confirmed that a fire investigator would be attending the scene yesterday.

Station Commander Clive Lowry added:"The damage is quite significant. The oil tank ruptured and the fire spread to the house and a car behind the house. The bungalows in the area are quite tightly packed but the crews managed to get the fire under control."

Neil McLaughlin, a Sinn Fein candidate in next month's election told the Derry News that he had spoken to the victim of the attack shortly after the fire took hold.

He said: "She was very badly shaken. She told me that she had been sitting at home, heard a noise and went out to look and saw the bins melting in front of her. At that point she rang 999 for the Fire Service then left the house and alerted her neighbours.

"I can't understand the thinking of anyone who would do this. It's completely irrational and shows no regard for anyone. Do they realise the amount of lives that they put in danger?

"If this had happened a couple of hours later at midnight or at 1am in the morning we could have been looking at deaths and homes gutted."

Warren Robinson, Independent Councillor for the area said:"I am horrified at the potential for loss life involved in this incident.

"I was actually out canvassing at the time and got several calls saying that the fire was beginning. I went there and I am shocked by what actually could have happened, but I am glad that no one was hurt."

And, SDLP Councillor Brian Tierney who also attended the scene told the Derry News: "I think the community are shocked. I saw the flames taking hold but I also saw a large presence of local people their assisting the residents. I'd like to thank them and the NIFRS for what they did.

"I would encourage people to think before they play with fire that can quickly spread out of control. From what I saw the house was pretty badly damaged. I could the damage had spread from the back of the house right through to the front."

Police said that enquiries into the incident are continuing and appealed for anyone with any information or who witnessed any suspicious information in the area to call the PSNI at Strand Road on the non emergency number 101 and quote reference number 1330 9/4/19.

CAPTION: The scene at Greenhaw Avenue on Wednesday morning (April 10,2019) following an arson attack on one of the bungalows. (Picture by Tom Heaney nwpresspics).
ADVERTISEMENT - CONTINUE READING BELOW