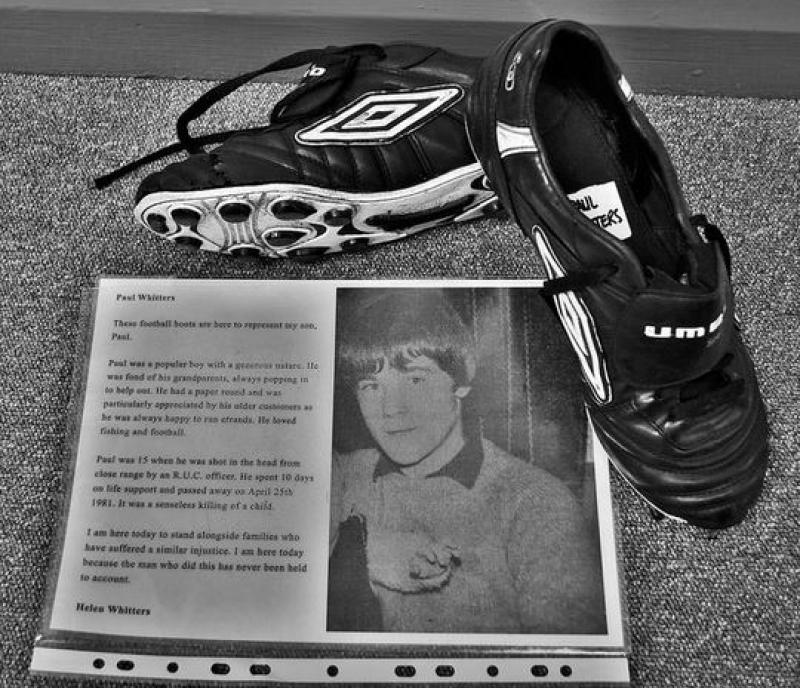 In the late 1980s the RUC settled a civil action against them in relation to the killing of Paul Whitters but admitted no liability for his death.

The 15-year-old was the second oldest in the family of three sons. He was born in Scotland and raised in Clydebank where his father worked in a number of jobs. Paul Whitters was 11-years-old when his parents decided to move back to their native Derry.

Eyewitnesses to the shooting in April 1981, all agreed that Paul was wearing a green mask and was with a group of around ten youths that were throwing stones at the RUC in Great James Street.

The police left and entered a nearby bakery and took up positions inside the building. One witness said: “The boys started to stone an electric shop which was above a bakery and broke several windows. They got disinterested and then moved back to the Lower Road, all except one boy who had a green mask over his face.

“He was standing in a stooped position as though looking in the gate of the bakery. Suddenly the little side-gate of the bakery opened and a RUC man stepped out with a plastic bullet gun and fired it directly at the boy at a distance of 20-21 feet. The boy fell forward.

“At this time all was quiet, there was nobody left but this boy. He fell in a heap and another constable came out from the bakery and the two of them took an arm and a leg and dragged him along the ground into the bakery.”

The severity of Paul Whitters’ head injuries saw him transferred for treatment to the Royal Victoria Hospital. His life support machine was turned off on April 25, 1981.

The RUC man who fired the plastic bullet did not attend the inquest into Paul Whitters death in December 1982. And, an RUC Inspector who investigated the killing and submitted two files to the Director of Public Prosecutions later admitted he didn’t make any door-to-door inquiries.

In his statement, the RUC man who fired the plastic bullet said that he had done so from a distance of 20-25 yards. One witness told the inquest that she had tried to get Paul to leave the area as she was fearful that he was going to be shot. She added that when she saw the teenager he had nothing in his hands and thought the police could have grabbed him instead of discharging a baton round and that he was shot from a distance of about five yards.

A pathologist told the Coroner's Court that death was caused from severe brain damage resulting from a fractured skull.

The Coroner told the jury that there was contradictions in the evidence and that it was hard to balance up the different accounts of the city. The jury more or less accepted the RUC's version of events. The police claimed that Paul Whitters was the ringleader of a group of youths who were firing stones. They accepted that the RUC warning might have been inaudible and the bullet had been fired at 15-20 yards.

In 2007, Nuala O'Loan's report into the shooting said the investigation into it had been "long and difficult" and sought to establish any new evidence that had not been previously disclosed.

She said: "Initially, we had difficulty in tracing key witnesses and documentation but, after a lot of painstaking work, were successful. There were other difficulties, however. The solicitor who handled this case for Paul's family has since died, as has the Coroner. The Ministry of Defence was very slow in responding to our requests for information and Paul's hospital records have been destroyed. The police officers to whom we wanted to talk, have retired and for the most part either refused to speak to us or stated that they had nothing they could add. The officer who fired the gun refused to speak to us and could not be compelled to do so in the absence of new evidence."

The Police Ombudsman upheld the family's complaint that the police did not conduct a proper investigation.

"My investigators took into account the realties of everyday policing in the city at that time and the difficulties of conducting inquiries. There is evidence that police officers had very heavy workloads, and were required to perform long shifts, often in very dangerous and stressful situations. However, even taking that into consideration, it is clear that the senior officer took statements only from the police officers, the security guard, the lorry driver and one other person, and stated at the inquest that he was satisfied he had the full story. He did not take statements from eyewitnesses. He did not think it necessary to make inquiries in the neighbouring houses nor give valid reasons why he did not do this, Mrs O'Loan said.

The Police Ombudsman upheld, in part, a complaint that police officers lied: "I am aware the police officers all gave evidence that the shot was fired at a range of at least 20 metres, whilst other evidence shows that this could not have been the case. However it is not possible to state categorically that these officers lied, particularly given the difficulty of calculating distances in the particular circumstances, which was described by the Coroner and the independent forensic scientist. However, I have also noted that the police officer in charge of the investigation informed his senior officers in writing that he had spoken to the seven people who had supplied new witnesses statements, and said they had declined to make further statements. Six of those people have told my investigators that they were not approached by the police. The seventh person said he could not remember being asked to make a statement", she said.

Mrs O'Loan also upheld the family's complaint that police did not keep them updated as to the progress of the investigation.

Baton rounds used at the time had metal seals, known as 'end caps' fitted to the tip to allow for the discharge of gases built up before firing. These end caps were supposed to drop away from the baton round after it had been fired. Scientists found a mark on the mask worn by Paul Whitters, which they believed may have been made by an end cap which had not fallen off. Police Ombudsman investigators have confirmed that in February 1982 a Northern Ireland Forensic Science representative told police that, in tests, certain batches of baton rounds consistently failed to loose their 'end caps' when fired, raising concern as to whether such a problem could add to the possibility of serious injury or death.

"The investigators also established that the issue had previously been discussed at a meeting in September 1981, after Paul's death, between senior police officers, the army and the Chemical Defence Establishment. There were initial suspicions that details about these problems were withheld from the DPP or the Coroner but I am now satisfied that all evidence was made available", she said.

This is a link to the Police Ombudsman's report into the shooting of Paul Whitters made in 2007: https://www.policeombudsman.org/Media-Releases/2000-2010/2007/No-new-evidence-killing-was-deliberate-but-use-of   CAPTION: A pair of football boots belonging to 15-year-old Paul Whitters.
ADVERTISEMENT - CONTINUE READING BELOW