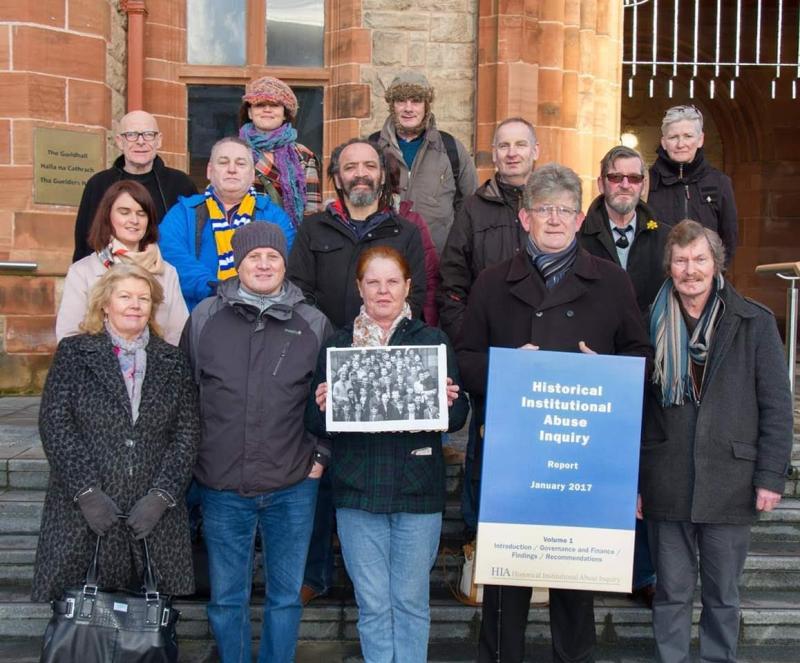 A historical institutional abuse survivor from Derry will today appeal to the head of the NI Civil Service to immediately progress a compensation scheme for victims. On Friday survivors of historical institutional abuse failed in a legal High Court bid to have the Northern Ireland Secretary of State, Karen Bradley, ordered to introduce compensation payments. Their lawyers argued that Karen Bradley has the authority and a legal duty to implement recommendations in the redress scheme. However, the judge ruled there was no unlawful failure to act by either Mrs Bradley or Stormont's Executive Office. Speaking to the Derry News at the weekend, chairman of the Survivors North West group, Jon McCourt commented: “There is a point where you believe the legal system will stand up for victims and survivors.  This time it didn’t. “We feel angry, disappointed and frustrated that over two years after the release of the Historical Institutional Abuse Inquiry report there appears to be no mechanism to force the secretary of state to implement the recommendations on redress legislation when it is presented to her by the Head of the Civil Service, David Sterling. “As far as I’m concerned, he is the only person in authority with any credibility in this whole debacle.” The hope for Mr McCourt, and other survivors, now rests with legislation that will be put forward by Mr Sterling and The Executive Office (TEO) to the SoS. At a recent NI Affairs Committee meeting, Mrs Bradley vowed to act with “urgency” once the recommendations are received. “I can’t believe a word that comes out of her mouth,” Mr McCourt said. “We will find out on Monday and we’ll probably give her a week or ten days to action it and if she hasn’t then it will mean another visit to the court. “It just can’t continue to drag on. We keep hearing about the democratic void that exists here.  It’s not just us, I’m very aware of the fact that hospitals are suffering, schools are suffering, and everybody else. “I am not getting into the debate of whether the assembly should be up and running again and we’re certainly not going to be used as the lever that is going to force the coalition of the unwilling around a table. “This is a human rights issue and it should be dealt with on that level.” A consultation process seeking the views of the public concluded on March 10.  TEO is analysing all responses received and will prepare a written report on the outcomes for ministers to consider. TEO intends to complete this work by late April to early May 2019. Draft legislation fell “significantly short” of what victims and survivors believe they are entitled to.  Amongst numerous recommendations, campaigners have demanded higher levels of compensation, set at £10,000 rather than the suggested standard payment of £7,500. And they said compensation should not be the same for everyone but instead should reflect the length of time spent in an institution so that those who spent more years of their childhood in an institution should receive more. Child migrants who were uprooted from children’s homes such as Termonbacca between 1947 and 1954 and shipped off to Australia also deserve recognition as part of the redress scheme, as far as campaigners are concerned. “This was part of colonial effort by Britain to make a new white Australia.  Children were taken from homes around the North who were abandoned or told their family members were dead, put them on boats and sent them off to Australia,” Mr McCourt added. ‘Commissioner’ Aside from compensation, Mr McCourt said the appointment of a Commissioner is “essential” as an avenue for victims and survivors to access records and find out about lost brothers and sisters. “I spoke to a man last night who was in tears and he said, ‘I just want to know who I am’.  He can’t get any information on his parents and a commissioner would have the legal power to do that. “This isn’t just about financial compensation, although that is important, unfortunately in today’s world hurt is only recognised by the value that is put on it.” He concluded: “For me they couldn’t create a number high enough that would compensate some of the people who have come through those institutions.” Photo: Jon McCourt (at front second from right) pictured outside the Guildhall with others from the Survival North West group and supporters.
ADVERTISEMENT - CONTINUE READING BELOW