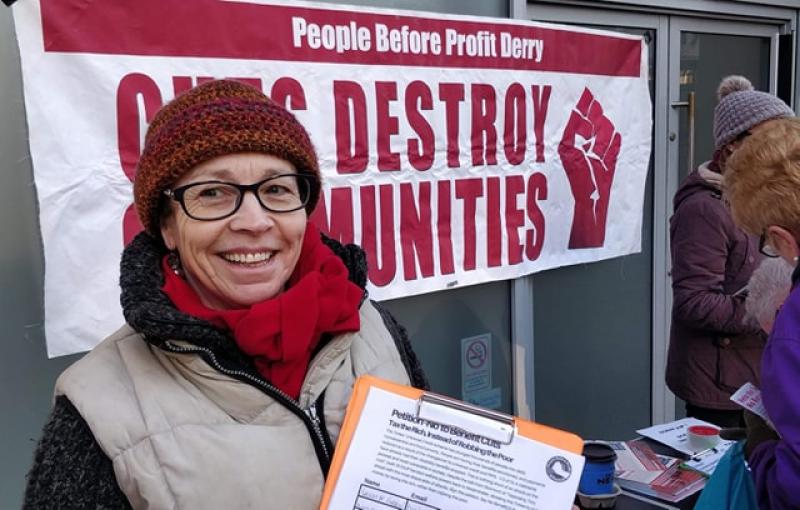 People Before Profit candidate for the Ballyarnett area, Nuala Crilly, has urged the public to stand up to British and EU "bullies" by mobilising against a hard border and the undermining of workers rights.
"Incapable of coming up with a solution for Brexit, May and the Tories have lost all credibility and should be stopped from imposing their goals here.
"Whether we are in or out of the EU, the fight against welfare reforms, health care privatisation, the school funding crisis and austerity decimating our communities needs to continue. We need to step up our efforts on all these fronts over the coming months. People power can derail the entire Tory project and any attempt to impose a hard border.
"Neither the Tories in Westminster nor their Tory counterparts who run the EU from Brussels care about ordinary people across Ireland. Dependent on the DUP to keep their rotten show on the road, the Tories are quite happy to ignore the wishes of a majority of people here in the North - but EU bureaucrats will abandon the so-called commitment to Ireland in order to suit their own elite interests if they deem it necessary."
She added: "Brexit is a fight between two powerful bullies whose projects are in crisis. Instead of 'Global Britain' fantasies the UK could break up. EU austerity and its authoritarian drive towards military integration is backfiring. We shouldn't allow ourselves to be beholden to either of these empires. The Fine Gael/Fianna Fail Irish government are on notice that they can't backslide on the commitment to refuse an EU directive to put up a hard border.
"People power mobilisations across all 32 counties can stop a hard border and prevent the undermining of workers rights. As a 32 county party People Before Profit are committed to overturning austerity and to making sure there's no attempt to harden the border over the next six months and beyond."
ADVERTISEMENT - CONTINUE READING BELOW