Singing for the homeless- from Sydney to Inishowen 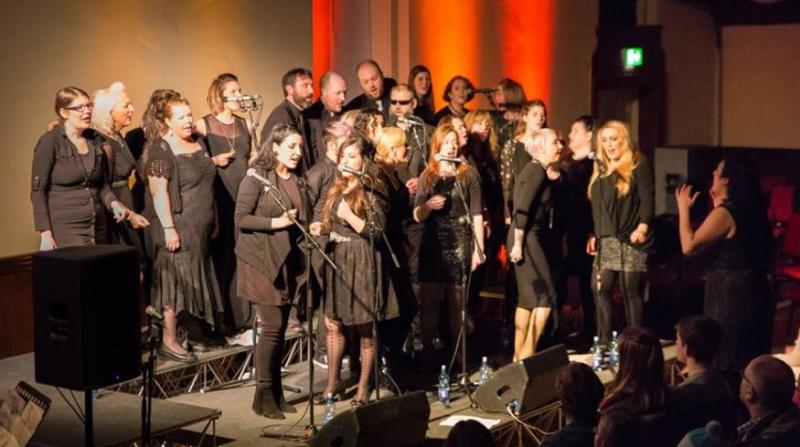 Sydney-based choir Timbre Flaws will team up with Carndonagh-based singers tThe Inishowen Gospel Choir (pictured) for a special evening at Cultúrlann Uí Chanáin in Derry next week. Timbre Flaws will visit Ireland throughout April as part of a special trip collaborating and performing with local choirs - workshops, mini concerts and pub gatherings. They will also participate in sing songs and busking in some of Ireland finest cities and towns, including Dublin, Cork, Galway and Donegal. In carrying out these performances and workshops, Timbre Flaws, who have been together for 15 years under the direction of Stuart Davis, hope to raise much needed funds to help Inner City Helping Homeless, Australia. Proceeds from the ‘Home Harmonies’ concert on Tuesday, April 23 will also go to North West Simon Community, Donegal and Derry Simon. “We welcome input from local choir partners on performance locations, musicals styles or innovative fundraising methods” Stuart Davis said. “Apart from local concerts the choir has travelled and sung in Cuba, Morocco, Vanuatu and now Ireland. Several members grew up in Ireland so this trip is quite special for us.” North West Simon Community and Derry Simon said: “Thank you to both choirs for putting a spotlight on the issue of homelessness in Donegal and Derry, which is often overlooked because of a lack of a visible rough sleeping population. “The night will raise awareness of a local phenomenon of “hidden homelessness” with many people stranded in inadequate or emergency accommodation, facing eviction, desperately trying to find housing – many people just one paycheque away from losing their home. “What this evening will do is help create much needed funds to further sustain the work and services provided to prevent homeless across Donegal and Derry.” Home Harmonies, An Evening with Timbre Flaws and The Inishowen Gospel Choir, will take place on Tuesday next, 23 April, at Cultúrlann Uí Chanáin in Derry. Doors open at 7.30pm, performance 8.00pm. Tickets are £8 and available at Eventbrite.com.
ADVERTISEMENT - CONTINUE READING BELOW