Tampering with election posters will result in prosecution, warns PSNI 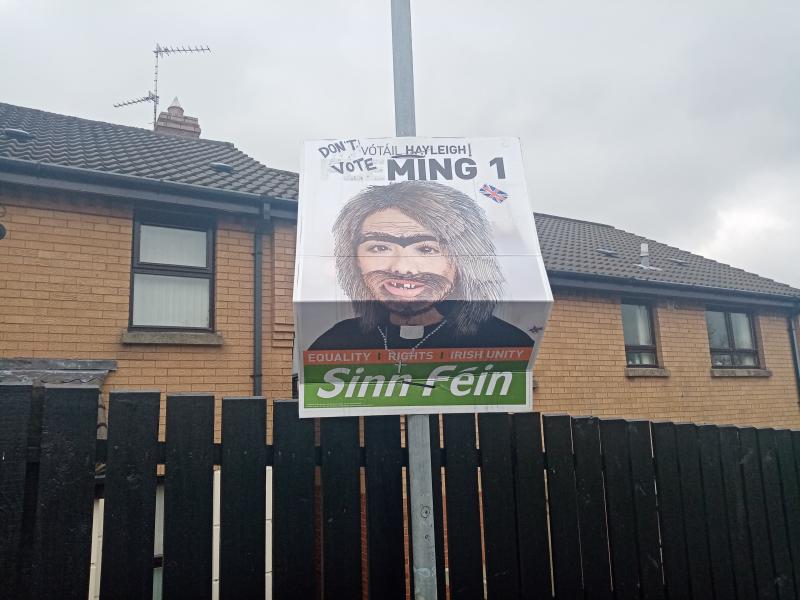 The PSNI this week issued a warning that anyone caught interfering with election posters in Derry will be prosecuted. Comments made on the PSNI Foyle Facebook page made it clear that damaging campaign posters is a criminal offence that could lead to charges of theft or criminal damage. It said that police are currently in the process of prosecuting people and added that the law will be fully enforced. Councillors and candidates from various parties told the Derry News that some of their posters have been torn down and damaged since campaigning began. A Sinn Féin poster erected in the Drumard Park area of Hazelbank, belonging to Foyleside candidate Hayleigh Fleming, was targeted by individuals who scrawled over it with black marker. Addressing that offence and the inappropriate destruction of posters in general, a Sinn Féin spokesperson said: “Posters in local council elections are an important element in getting the message out there to voters of which candidate is standing in each electoral area. “People have the right to disagree but the theft and burning of posters is completely different. We have seen some shocking incidents in the past few years with the placing of posters on bonfires with racist, sectarian and homophobic comments on them. “We have a democratic and legitimate right to campaign, and to bring our message of equality, rights and Irish Unity to the people of Foyle.” Meanwhile, SDLP Cllr Shauna Cusack acknowledged that, while election posters are “not the most popular feature on our landscape right now”, sometimes they are a “necessary evil” of a campaign. “Legally they are protected and it’s an offence to tamper, remove or vandalise them,” she said. “At this time of year political tensions can run high and individuals may want to express this anger or sheer mischief by destroying someone’s posters, this is really unfair and unnecessary. “I would also urge candidates and activists not to jump to conclusions and falsely accuse people of interfering with posters, as I’ve recently been subjected to, when its purely the elements doing their work. “This petty political point scoring is an insult to the hard work many candidates do on the ground and hopefully this speaks volumes more to the electorate than a picture on a post.” Independent Councillor Sean Carr had campaign material taken down in the Glen, Ballymagroarty and Hazelbank but was able to track down “a number of young fellas” with them. He did however say that he didn’t report the incident and “definitely wouldn’t want any young person” to end up with a criminal record as a consequence. “The temptation is there for them to do it and I don’t think there’s anything personal about it.  It’s part of the democratic process and I would just ask them to let them be and allow people to have a choice,” he added. Speaking to the Derry News this week, Drew Thompson of the DUP condemned it as a criminal offence, no matter what party or person is targeted. “There were four people caught in Portrush with posters in their car and my understanding is that those people are subject to going to court, if they haven’t been already. “Some people don’t understand the severity of it and I know people who have had posters removed in the Waterside and Cityside, defaced, and whatever else. “It’s important the message goes out that it is a criminal offence, and some of these people would be caught on CCTV so could, and should, be identified when possible.” Prosecutions The PSNI Foyle Facebook page stated that police have recently “detected and are in the process of prosecuting people” who have damaged, removed or destroyed election posters. “This could simply be a moment of madness or something more sinister. “Regardless it is a criminal offence. Depending on the circumstances it will be treated as Theft or Criminal Damage. “The posters are expensive to produce and they are the property of the people or parties standing for election. These posters will be put up and removed under the Guidance of The Electoral Commission.” The officer added: “You will not agree with each and every political party, candidate or policy but we as a society must remember to respect freedom of speech and support the right to a free democratic vote. “The opportunity to vote is a cornerstone of democracy and a human rights issue. Facilitating a fair, peaceful and effective voting process is a primary concern for the police service. Therefore, we will act on behalf of ALL when enforcing the law when required.” Photo: The defaced poster in the Hazelbank area of the city of Sinn Féin Foyleside candidate Hayleigh Fleming.
ADVERTISEMENT - CONTINUE READING BELOW