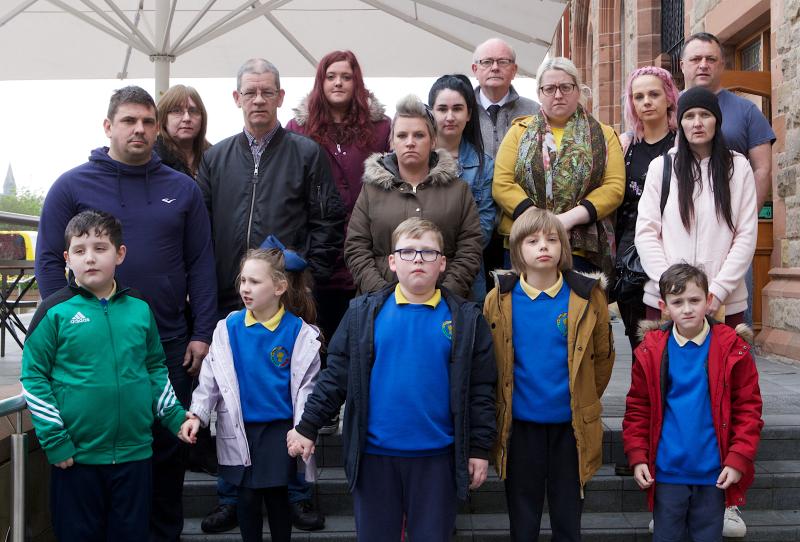 Parents and schoolchildren from Groarty Integrated P.S. this week hand delivered letters to education chief, Derek Baker, imploring him to reverse a decision on its proposed closure. The group gathered outside the Guildhall in the cold as the Permanent Secretary from the Department for Education met a cross-party delegation inside. The meeting follows a motion proposed by SDLP Councillor Shauna Cusack stating that it recognised “local schools are facing unprecedented financial pressures following real reductions in core funding for education, to the sum of £70 per pupil over the last number of years.” There was disappointment amongst the parents and young people when it was decided that Mr Baker would not come outside to personally address their concerns. Instead, it was agreed that one parent, Leanne Brown, would enter the Mayor’s parlour on behalf of the group to present Mr Baker with letters written by children from the Coshquin-based school. She hopes Mr Baker will take time to digest the messages and pictures drawn by children which express their “love” for the school, and that they will inform his decision. Speaking outside the Guildhall on Tuesday, Ivan Peoples, who attended the school as a pupil and now has a child in primary 1, said he came along to voice his concerns to decision-makers. “I thought the whole future of Northern Ireland was to integrate both sides of the community and I don’t understand why they’d want to close the only one they have on the West Bank. “Foyle College has already moved to the Waterside, and the only other school we have in the city is Oakgrove, and for us to travel over there could cause problems.  If it’s a windy day the bridge can be closed. “The school is integrated in more than just religion, there are people with additional needs, and I think it teaches young people to be caring towards people with needs and can help prevent bullying further down the line. “It was a small school when I was there and I don’t see why they should close it now when there is going to be so much development around it.” Martina McCourt’s son Michael is the most recent pupil to enrol at Groarty P.S. after she decided the school was best-placed to meet his “complex needs”. “Because the school he was at was so big there weren’t enough staff to cater for his needs. “The staff there are fantastic and they picked up on things straight away, certain traits in class, and when I was expressing concerns they were in agreement. “I’m only finding out myself that there are pupils with different needs, some with severe needs, and each one of them is being catered for as an individual and they all accept each other. “It’s just like a wee family and I love it.  He’s coming on great. “My niece also went to Groarty and she has excelled since. “I would ask the Education Authority to please reconsider because every child deserves a chance.” ‘Unique’ Independent Councillor Sean Carr organised for the parents to attend after meeting them at the school last week. “We’re very disappointed that the parents didn’t get to meet the permanent secretary.  Some of the young people wanted to read their letters to him. “If you read some of the stories they’re a powerful testimony of the school and hopefully he will read them now. “There would have been no hassle, a few parents and children wanted to have their say, so it’s very disappointing. “The school has been there for quite some time and children who have left bigger schools have thrived at Groarty P.S., that is what we need, and it is unique in this part of the world. “I’d like to see the school retained and a new build for that school which at one stage they were promised with all the new development around Skeoge.” Meanwhile, Independent Councillor Darren O’Reilly, was at the meeting with Mr Baker and he said various points were aired about the pressures faced by parents, principals and frontline workers. “There needs to be pressure politically and people need to take direct action like we’ve seen today.  More of that is needed to put pressure on (the Secretary of State for NI) Karen Bradley. “Our school system is in a serious mess, a crisis, and I don’t think the Tories are too worried about wains in Derry.  We need to make sure they know and the only way to do that is to campaign. “All the parties were unified in saying schools need more resources and Groarty P.S. needs to be protected.” Ultimately, any final decision regarding the future of Groarty Integrated P.S. has to be taken by a minister, or if devolved institutions are still suspended, by the permanent secretary at the Department of Education by January 2020. The closing date for the consultation process is June 13 and for those who want to view documents, you can visit: www.eani.org.uk/prepublication-consultations/groarty-ips Photo: Groarty Integrated P.S. pupils and their parents pictured outside the Guildhall on Tuesday before letters and drawings were handed to Mr Baker.
ADVERTISEMENT - CONTINUE READING BELOW