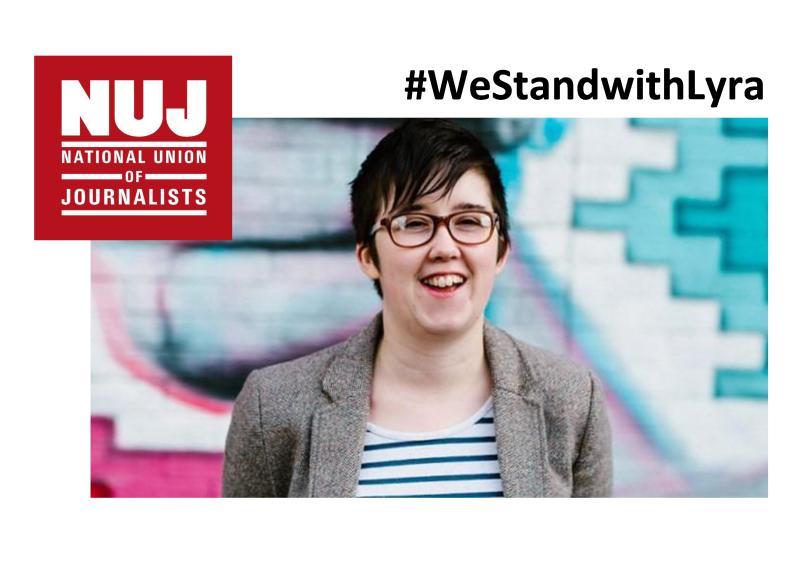 The National Union of Journalists (NUJ) will today hold a series of rallies as the funeral of Lyra McKee gets underway in Belfast. 29-year-old Lyra was killed last Thursday in Derry after being hit by one of a series of rounds fired by the 'New IRA' at the PSNI during rioting in the Creggan estate. A statement on the NUJ website is asking for a show of solidarity from everyone at 1pm today. It says: "On Wednesday, April 24 NUJ officials and members will join with the heartbroken family, friends and colleagues of Lyra McKee at her funeral service in St Anne’s Cathedral, Belfast. "Lyra’s murder on Thursday night is a devastating blow to her partner and family, and to her many friends and colleagues throughout the NUJ. We keep in our thoughts Lyra’s partner Sara, her mother Joan, sisters Nichola, Mary, Joan and her brothers Gary and David. "The union is encouraging every NUJ member to take part in a symbolic action of solidarity in Lyra’s memory – if possible at 1pm, the start time for the funeral service, or at some point during the day. "Whether you are in a newsroom, at lunch or working alone please take a stand for journalism and encourage those around you to join in a simple gesture of solidarity. However you choose to mark Lyra’s life, please share with NUJ colleagues by tweeting a picture using the hashtag #WeStandWithLyra and post to the NUJ Facebook page." NUJ members will form a guard of honour for Lyra McKee's funeral cortege in Belfast this afternoon and other union rallies will take place in Dublin, Glasgow and London. The NUJ has been supporting friends of Lyra who set up a GoFundMe account, as a practical act of solidarity to cover funeral expenses and to establish a legacy to mark Lyra’s contribution to journalism, you can donate to the fund online - https://www.gofundme.com/in-memory-of-lyra-mckee
ADVERTISEMENT - CONTINUE READING BELOW