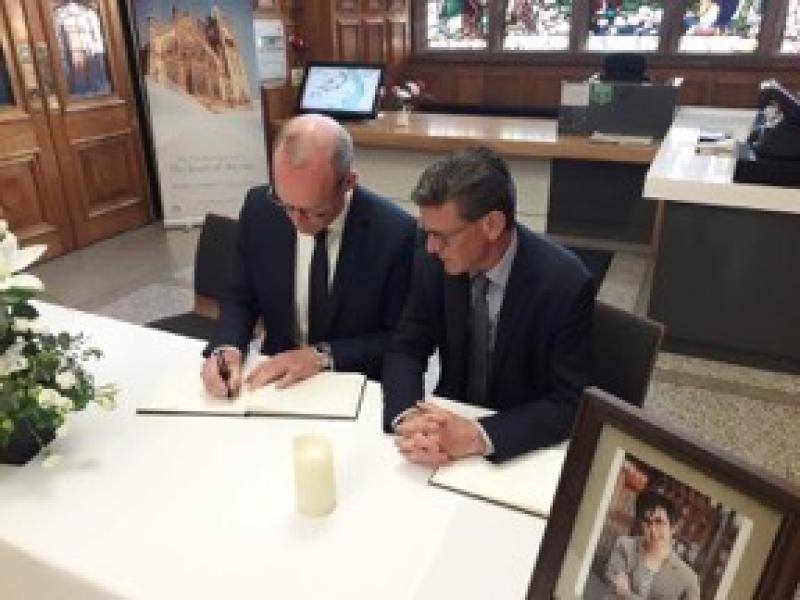 The Mayor of Derry City and Strabane District Council Cllr John Boyle and Council Chief Executive John Kelpie are travelling to Belfast today to attend the funeral of murdered journalist Lyra McKee. Mayor Boyle said it was with a heavy heart and great sadness that he attended the funeral but as First Citizen he felt it was important to bring with him the prayers and thoughts of the people of Derry. The Mayor attended her wake earlier this week where he met with her family and extended the heartfelt sympathies of the people of Derry at their tragic loss. He also met with Secretary of State Karen Bradley and An Tanasite, Simon Coveney who travelled to Derry to sign the Book of Condolence in the Guildhall. Mayor Boyle said: “The shooting of Lyra McKee in our city last Thursday has had a huge impact on the people of Derry and the wider community. We are all deeply shocked and saddened at her murder and will join in solidarity today with her family and friends to celebrate her life. Lyra McKee was a wonderful person, she believed in peace, tolerance and equality. She symbolised all that was good about our society. “Today we will remember her as the talented and loving person we all loved, who committed her life to campaigning and writing for a better future. Our city sends its love and strength to those who knew and loved Lyra as they say the hardest of goodbyes. Rest in peace Lyra.” The Mayor added that those who are unable to attend the funeral today can show their solidarity with Lyra’s family and friends by gathering in Guildhall Square at 1pm for the Come Together for Lyra event. He added that the Book of Condolence in memory of Lyra McKee will also remain open for the public to sign at the Guildhall for a number of weeks. CAPTION: Mayor John Boyle and Tanaiste Simon Coveney pictured at the Book of Condolence for Lyra McKee at Derry's Guildhall.
ADVERTISEMENT - CONTINUE READING BELOW