Lyra's Law: close friends call for same-sex marriage legislation to be named in honour of late journalist once local politicians 'catch themselves on' 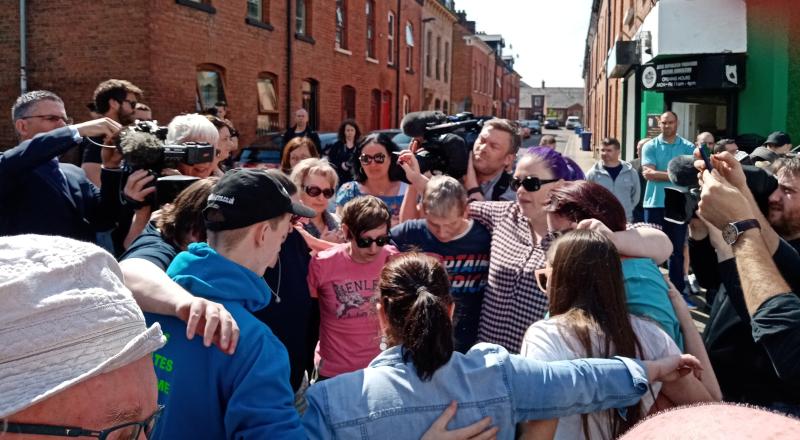 Lyra McKee’s close friends have expressed a desire for marriage equality laws in Northern Ireland to be passed in her name. Ensuring Lyra McKee’s name lives on will now be of primary concern to her family and friends. They intend to fight for the causes that she held dear.  At the top of the agenda is marriage equality and there is a desire to have any law passed in Lyra’s name. Speaking this week, friend Sinead Quinn explained: “We have a few ideas, some of them are too crazy, some are excellent.  We’ve talked about setting up a movement for women, that we will call ‘Lyra’s Law’ or ‘Lyra’s Legacy’, which is to force the Northern Irish government to catch themselves on and bring marriage equality here now. “Because had it been here Lyra and Sara probably would already be married and a lot of our friends here would too. “That’s something Lyra felt really passionate about and if we can have Arlene Foster welcomed in Creggan then Arlene Foster can now welcome the LGBTQ+ community completely by doing that for us.” She added: “From here on it’s just about trying to keep Lyra’s memory alive and trying to keep the messages alive that she was passionate about – that’s something we believe very strongly in. “We will continue, and continue, and continue to do things in Lyra’s memory.  Her name will never be forgotten in this town. “Whether it be a fundraising night for her partner Sara, a walking club because she wanted us to do that, we are constantly coming up with ideas to keep her memory alive because she was the kind of person would’ve done that for us.  We have to do it for her.” Yesterday, Amnesty International said it would be supportive of calls for Lyra’s Law, however, as a mark of respect did not wish to comment on the day of her funeral. Similarly, nobody was available for comment from the Rainbow Project as they were in attendance at Lyra’s funeral or holding vigils of their own. The Northern Ireland Assembly has voted on same-sex marriage five times since 2012, and although it was passed by a slim majority on the fifth attempt, it has been consistently vetoed by the Democratic Unionist Party using the petition of concern. The DUP was asked to respond to comments made by Ms Quinn but did not provide a response at the time of going to press yesterday. In Northern Ireland it's still illegal for same-sex couples to marry.  Despite overwhelming public support for equal marriage in Northern Ireland – as well as amongst politicians – progress on this issue has constantly been blocked. Over two years since the collapse of devolved government in Northern Ireland, Westminster has been asked to urgently intervene. Many believe it is time Northern Ireland was brought in line with the rest of the UK, to end discrimination against the LGBTQ+ community in NI. Ms Quinn concluded by saying that those in power need to get back round the table to form a government.  However, in doing so, they must seek to bring about meaningful change by making Northern Irish society inclusive for everyone. Photo: Ms Quinn (purple hair and sunglasses) pictured with friends this week at protest outside Junior McDaid House.
ADVERTISEMENT - CONTINUE READING BELOW