Lyra McKee: ‘Everybody seems to think they’ve lost a relative of their own’-Dermie McClenaghan 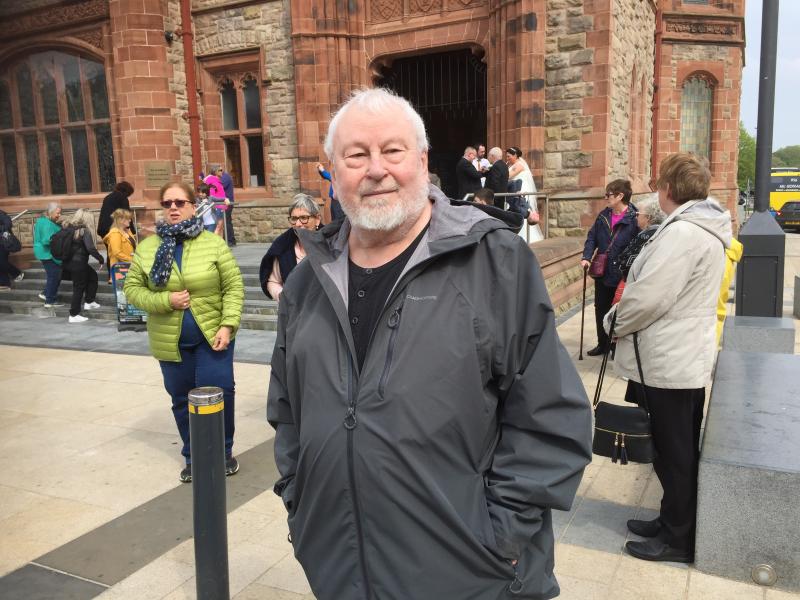 The initial sombre silence of a gathering of around 300 people at Derry’s Guildhall Square yesterday afternoon as the funeral service of Lyra McKee got underway in Belfast was broken by a spontaneous round of applause.

Friends of the murdered Belfast journalist had asked the people of her adopted city to gather in Derry city centre in an act of solidarity as a celebration of her life took place in at an interdenominational service at St Anne’s Cathedral.

People began to gather in Derry city centre just before 1pm yesterday to coincide with events in Belfast.

Both young and older people stood around the edges of the square and were joined by political representatives and senior clergymen from both the Catholic and Protestant traditions.

There were no speeches or statements made at the gathering and as the Guildhall clock chimed 1 o’clock a noticeable hush descended over the crowd. Then around 1.05pm a spontaneous round of applause rippled through the crowd and grew louder until it ceased around 30 seconds later.

Although this marked the end of Derry’s vigil many of the people gathered remain at Guildhall Square for around half-an-hour afterwards to share their thoughts on the shocking events of the last week in the city.

Catholic Archbishop of Armagh, Eamon Martin who attended the vigil earlier said on Twitter: “In recent days a fervent cry from the heart of #Derry has pleaded #NotInOurName Today, as #LyraMcKee is laid to rest, let that cry resound in the hearts of people all across this beautiful island. Pledge today to pray and work for #lastingpeace

He told the Derry News: “I quite like what Lyra said in that letter to her 14-year-old self-it will get better. And, I agree with her. But, it’ll only get better if we do what we are doing today and that’s forget about all the labels that can divide us and build walls between us.

“It’s time to lower all those walls and to connect with people regardless of their colour, their age, their creed or their sexual orientation. We can only together make this place better.

“It’s time for us to change and to stand together and create a foundation that our children can build upon as they come after us. So, we have a big responsibility to build that and if we love our children then peace must be at the heart of everything we are doing.

“It be a wonderful tribute to Lyra McKee if as a result of her untimely death it could be the catalyst for the path to become clearer for all of us to walk towards the destination of peace. We need to hold hands and recognise that we are stronger together.”

He said: “This was very important. You know, Derry has a very solid heart and solid feeling.

“The city is a like a clatter of wee villages stuck together and that’s why it’s important that this happened because everybody seems to think that they’ve lost a relative of their own.

“Also, people want to let the family know that they are thinking about them. I think it’s wonderful to see these people here today.”

The Derry News also asked Mr McClenaghan if he ever thought he’d still be experiencing events like the death of Lyra McKee 50 years after the start of the Troubles.

He said: “I think it’s unfortunate. I’m not sure violence ever helped, because when violence starts you don’t know when it’s going to end. It has that elasticity about it.

“You look back and you wonder sometimes. You feel for the people that were hurt and killed in the Troubles. You feel very deeply for them. Violence didn’t help at all.”

Helen Deery’s brother Manus was shot dead in May,1972. On the same weekend Ranger William Best, a young soldier from Creggan, was abducted and murdered by the Official IRA.

Poignantly, both victims are buried next to each other in Derry City Cemetery.

The huge backlash against the Official IRA over the murder led to the organisation calling a ceasefire a short time later.

Helen Deery said: “That was the last time I felt the same anger in this town. That ruined the Official IRA and what happened to Lyra McKee should do the same to Saoradh.

“Lyra McKee represented everything that you want your son or your daughter to be. This is a very cruel waste of life. I would like to see the same response that happened in 1972. People should be on the streets.”

Kate Nash, whose brother was killed and her father wounded on Bloody Sunday had met Lyra McKee on several occasions.

“I wasn’t a close friend, but I knew her well enough to know what a powerful spirit she had. She was a very, very good human being. She had genuine empathy for everyone.

“There aren’t too many like her in this world to be honest with you. So, I am hoping today that the memory of Lyra and what she stood for would be taken up by people.

“If these people want power they should go down the political route and do it that way and do good for people.

“If Lyra’s life meant anything, I would beg them stop what they’re doing. This is the time for change,” she said.