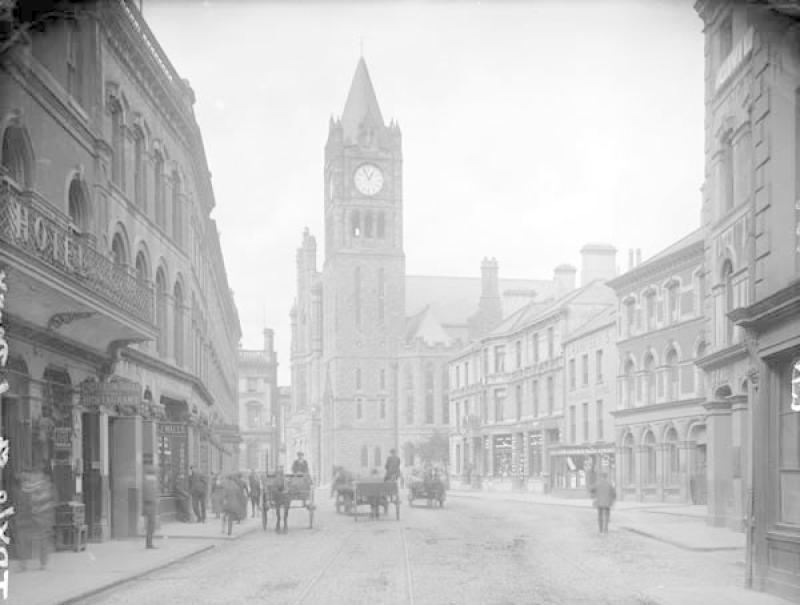 At his passing in 1908 the local press recorded that Alexander Brown had been one of the biggest contributors to the business life of Derry in the previous 50 years.

Alexander Brown was born in Ayr, Scotland to John and Mary Brown in 1819.

The future businessman and his wife Agnes (nee Stewart), also a Scot from Renfrewshire arrived in the city in the 1850s and remained here until their deaths.

The Derry Standard reported: “The death took place yesterday of Mr Alexander Brown, who was for more than half-a-century a resident of Derry, and for a considerable part of that time one of its most enterprising manufacturers.

“A native of Scotland he came to the Maiden City as managing foreman of the old Wellington Foundry in Foyle Street of which the late George Green was then proprietor.

“After a period of service in that employ he began business on his own account in premises on Foyle Road which stood on the site now occupied by Messrs. Burns’ laundry, and by the conduct of his business, he developed a trade which soon  necessitated a removal to larger premises.”

The larger premises referred to became known as ‘Brown’s Foundry’ which for the following few decades provided male employment in a city reliant on and largely kept economically afloat by the hard efforts of the female population in the shirt factories.

The obituary in the Derry Standard continued: “What was then known as McCarter’s Saw Mill, Foyle Street was secured, and in that new location Mr Brown was able, with the assistance of his sins, who were expert mechanical engineers, to still further develop his business, and to establish a widespread reputation for the excellence of his castings and other foundry work.”

Having acquired the larger Foyle Street premises from George Green, Alexander Brown & Sons set about expanding its workforce and its trade links.

“With the new extended facilities which the new works gave, the firm enhanced the reputation that its head had already established and many important contracts at home and at a distance were secured and faithfully executed,” the Derry Standard added.

The Brown family were of Scots Presbyterian stock and as such it appears had an ecumenical approach both in business and to life in general.

Alexander Brown’s obituary also recorded: “In politics Mr Brown brought Liberalism with him from Scotland, and he was a Gladstonian of the old school. In all the relations of life he was a worthy, decent man.”

William Gladstone as Liberal Prime Minister had of course been an advocate of Irish Home Rule, although unsuccessful in his attempts to move the Bill through the House of Lords.

The liberal attitude followed by Alexander Brown may well have been a key factor in apparently applying little scrutiny to a man’s religion before employing him.

As the decades progressed there is certainly evidence that Protestant and Catholic alike were employed at the Foyle Street foundry as was highlighted in interviews by two of the city’s most well known political figures in recent times.

Recalling his time there in a newspaper interview some years ago he said: “I served my time there in 1969-1970. It was a company known for its engineering skills and there was a variety of work you were able to do.

“They were difficult days as there was little money in it. I was always outside working on contracts for repairing ships that came into the quay in those days.

“You could also find yourself working away from home. We were also responsible for the fishing fleet in Killybegs. I was lucky to work with someone called Huey who was very skilfull and he taught me a lot I still remember. People like Glenn Barr worked there too.

“They were good days and there was nothing like health and safety then-on winter days you just lit fires all around the place for heat.”

The late Martin McGuinness who also of course held high office at Stormont had a dedicated connection to the foundry as well.

The former Deputy First Minister's father was a foreman at Brown's Foundry. William McGuinness passed away in 1973.

In an interview some years ago, Martin McGuinness recalled: "My father used to leave our house in Elmwood Street and he would walk up through the Fountain and Willie McNeill would step out his front door and they would walk down to work together. They were like two brothers all their lives.

"Religion was never a problem in our family. My father was a very religious man, a very good Catholic, God rest him. He went to Mass every day of his life and we said the rosary every night.

"But, his best friend was a Protestant from a unionist area of the city, a man who he worked with who we loved like an uncle."

Alexander Brown was in his 90th year when he died at his home, 43 Foyle Road in Derry on February 19, 1908. His wife Agnes, whom he had married in 1846 in Scotland died five years before him in 1903. The couple are buried in Derry City Cemetery.

The Derry Standard also said of Alexander Brown: "For some time past he had not taken an active part in the firm's affairs, but he was one who, by constant strenuous effort intelligently and successfully directed, had earned a spell of repose in the evening of his days."

CAPTION: Brown's foundry was located at the far end of Foyle Street from Guildhall Square.
ADVERTISEMENT - CONTINUE READING BELOW