"Why does it take the death of a 29-year-old woman with her whole life in front of her to get to this point?" 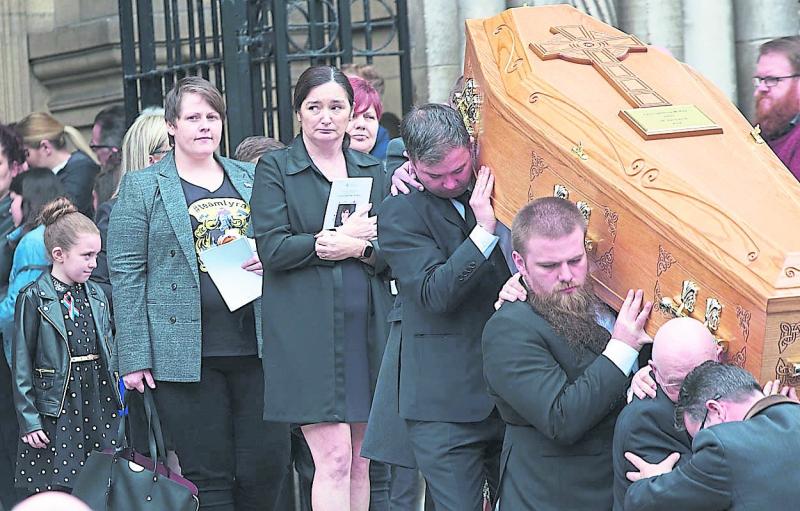 Lyra McKee was laid to rest in her native Belfast yesterday but the hearts and minds of the people of Derry, a city that now has her etched in its memory, cannot rest. Thousands filled St Anne’s Cathedral and lined the nearby streets for the funeral of the talented 29-journalist, writer and campaigner, who was murdered by a member of the New IRA in Creggan last Thursday night. Among the dignitaries and civic leaders who came to pay their respects were the Irish President, Michael D Higgins, An Taoiseach, Leo Vradkar, and Tánaiste, Simon Coveney. Also attending was the British Prime Minister, Theresa May, Labour leader, Jeremey Corbyn and Northern Ireland Secretary, Karen Bradley. Local politicians in attendance were Sinn Féin President, Mary Lou McDonald and Vice President Michelle O’Neill, MEP Martina Anderson, SDLP leader, Colum Eastwood and former leader, Mark Durkan, DUP leader, Arlene Foster and DUP MP Gregory Campbell, alongside the Mayor of Derry and Strabane, John Boyle and Fr Joseph Gormley, parish priest of St Mary’s, Creggan. However, despite the high-profile politicians and the hundreds of cameras focusing on the cross-community celebration of her life, this day was about Lyra and those she loved dearly. Not least, was her soul-mate, Sara, for whom she had already secretly bought a ring to ask her to be her wife. Sitting in the church, you could not help but be struck by the diversity of those who had come to mourn the loss of a dear friend and inspirational young woman. People of all ages and faiths came together; many clad in Marvel t-shirts or the Harry Potter Hufflepuff colours, of which Lyra was such an avid fan. There was also a beauty brought to the celebration of her life by the presence of so many rainbows – the flag she proudly flew as a member of, and activist for, the LGBTQIA community. It was a testament to the lives she had touched to hear the people there speak about why they had come. One woman did not know Lyra but felt moved to be there to mourn her tragic death, another wept, saying she had known Lyra since she graduated university, another was a nun who had travelled from Dublin to pay her respects and, Ann Hales, veteran Northern Irish TV presenter came to honour the young journalist killed doing her job. However, what everyone had in common was the sense of solidarity and resolve that we would not be dragged back into the dark days of our violent past. As Lyra’s coffin was carried into the cathedral those outside and the mourners within, burst into spontaneous applause. The tributes to Lyra from friends, family and clergy alike, had the silk threads of her humour, love, compassion, loyalty, talent and brilliance sewn throughout them all. Those listening found themselves laughing at fond memories in one moment and the next reduced to tears by the hollow void left behind by such a gentle soul wrenched from life so cruelly. Catholic parish priest, Fr Martin Magill, commended the politicians for uniting in Creggan on Good Friday last week, in the wake of Lyra’s murder. However, he faced them directly and begged the question: "Why does it take the death of a 29-year-old woman with her whole life in front of her to get to this point?" This received a rapturous applause as people got to their feet to give him a standing ovation for asking the question on everyone’s lips. As Lyra’s body was brought to her final resting place, again, applause rang out within St Anne’s Cathedral and along the streets lined by those who came together to pay their final tributes. In a statement, her family said: “We ask everyone who knew Lyra to continue her message of positivity and hope, by respecting her memory with dignity and respect. Lyra’s answer would have been simple, the only way to overcome hatred and intolerance is with love, understanding and kindness.” Meanwhile, last night police appealing for information that will help catch those responsible for the Lyra’s murder made an offer of a reward up to £10,000. PICTURED ABOVE: The coffin of the late Lyra McKee is carried from St. Anne's Cathedral followed by her partner Sara Canning. (Photo - Tom Heaney, nwpresspics)
ADVERTISEMENT - CONTINUE READING BELOW