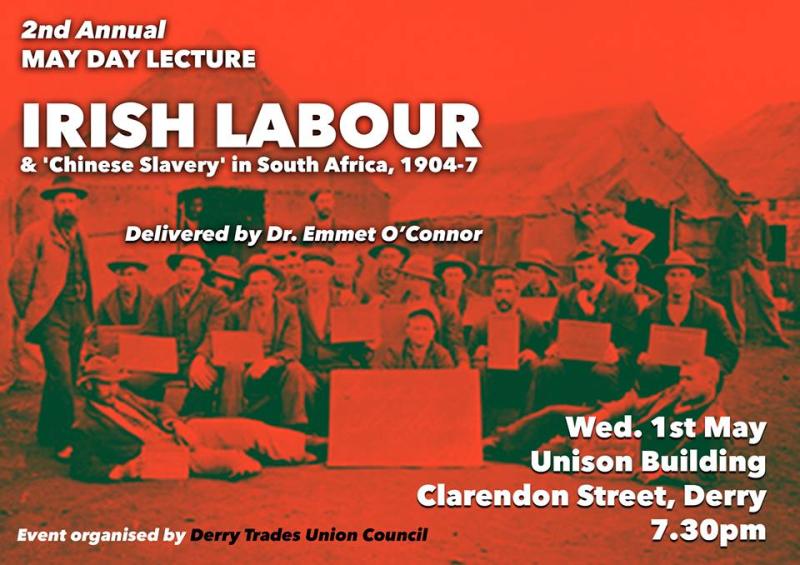 Derry Trades Union Council will play host to the Second Annual May Day Lecture on May Day, tonight at the Unison Building on Clarendon Street at 7.30pm. Thi s years lecture will by delivered by Derry's renowned Irish labour historian and author Dr. Emmet O'Connor on the subject of 'Irish Labour and Chinese Slavery in South Africa, 1904-7'.
"In 1904 Britain’s Conservative government agreed to address the labour shortage in the Rand goldmines by importing indentured workers from China. By 1905 there were 50,000 Chinese in the Transvaal. Well before the first Chinese arrived in June 1904, British trade unionists were alarmed that a precedent was being set for the importation of cheap labour closer to home, and Britain’s ‘Non-conformist conscience’ was disturbed at the spectre of ‘nameless practices’ developing in compounds of young men separated from their families. ‘Chinese slavery’ would be a major factor in the crushing defeat of the Conservatives in the 1906 general election. "In Belfast, William Walker, Ireland’s best known Labour leader before Big Jim Larkin, made much of ‘Chinese slavery’ in his efforts to become a Labour MP in Belfast North. Hoping to present himself as a patriotic imperialist and build an alliance with the Belfast Protestant Association, Walker raised the issue on Belfast trades council and in the Irish Trades Union Congress, the labour press, and his election campaigns. "The Irish reaction reveals trade union attitudes towards the empire, South Africa, and race. It also illustrates similarities and differences between Irish and British labour activists, and between labour leaders in nationalist Dublin and in Unionist Belfast. And it provides an unusual perspective on the controversy about how ‘British’ contemporary Belfast labour actually was." The second May Day Lecture and will take place in the Unison Building, Clarendon Street, Derry on the evening of May Day itself, Wednesday May 1 at 7.30pm. Admission is free and everyone welcome.
ADVERTISEMENT - CONTINUE READING BELOW