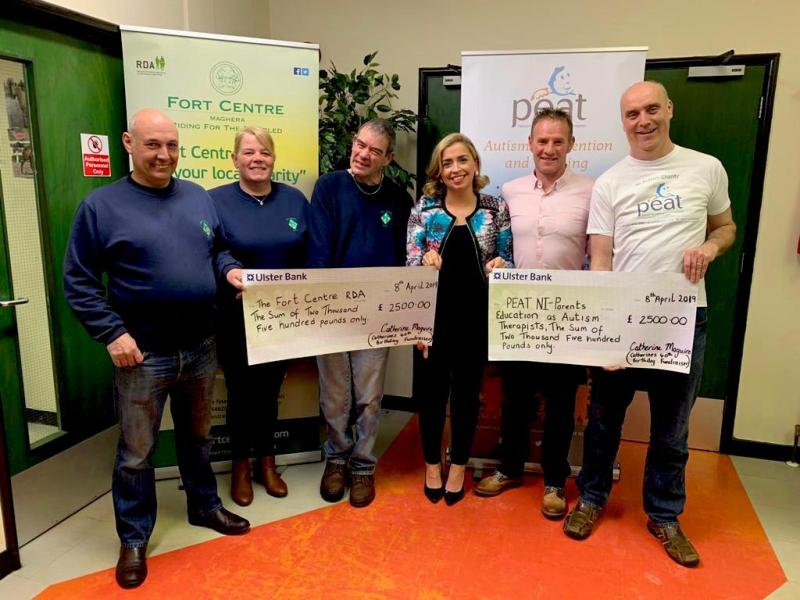 The month of April is Autism Awareness month and to mark the occasion one local family decided to raise money and awareness for two causes close to their hearts.

Just over three and half years ago, Catherine and Declan Maguire’s son was diagnosed with ASD (autistic spectrum disorder).

Thrown into a situation which neither parent had any experience with, the family say it was the work of two charities which helped them on their journey with autism.

Speaking to the County Derry Post Catherine said, “After professionals observed our son for a year he was diagnosed with ASD at the age of two (years) and ten months.

"As a family we had no idea what was ahead. I began to study information a friend had shared with me about ABA (applied behaviour analysis) therapy through PEAT (Parent’s Education as Autism Therapists.)

“After sitting down with my husband and discussing this form of therapy with him, we decided this was the road we wanted to take with our son.

“Initially we started him on a one to one programme two days a week. Then it progressed to three days, then five days a week.

“Susan, Nicola and Scott the ABA therapists became like family members to us. Without them teaching our son, Declan and myself the techniques to cope with different situations, I honestly believe our son’s journey would have been a very different one.”

The work PEAT has done with family is truly remarkable.

As a result, Catherine and Declan’s son is able to attend mainstream school full time.

“He is Year 2, has his own classroom assistance and is doing well,” continued Catherine. “He does still have his struggles but we cope with them as they arise.”

As well as getting help from PEAT, which Catherine says provides a lot of support to families in Mid Ulster, their son also became involved with the Fort Centre Riding for Disabled, Maghera.

“We got him a place at the Fort Centre RDA riding horses and he loves this so much,” Catherine explained.

“Martin and Teresa and all the staff are great and they provide a fantastic service in our community. He goes riding there every Monday with his father, it’s their thing. His confidence has grown so much since he started horse riding.

"Each week they set him little tasks to do and spending time with the horses calms him and helps him with his anxiety. I would encourage local people to continue to support this charity which provided such a vital service, right in our own town.”

Given that these charities had such an impact on the family, Catherine said she and her husband decided they wanted to give something back.

“We decided we wanted to raise money for both PEAT and the Fort Centre RDA. My 40th birthday was coming up so we asked my family and friends rather than getting me presents if they would kindly make a donation in aid of our chosen charities.”

They couple also set up a JustGiving page and managed to raise an impressive £5,000 which was shared equally between the two charities.

“We are overwhelmed at people’s generosity. My family, friends and clients all know about our son’s journey with autism, but their kindness has showed no bounds.”

Catherine added, “I just want to thank every single person that came to our home for my birthday party or gave family members donations. We have appreciated every single penny which has now been given to two much loved charities. From all us, the Maguire’s and McIlvars, we thank you so much for your kindness and help with this fundraiser.”