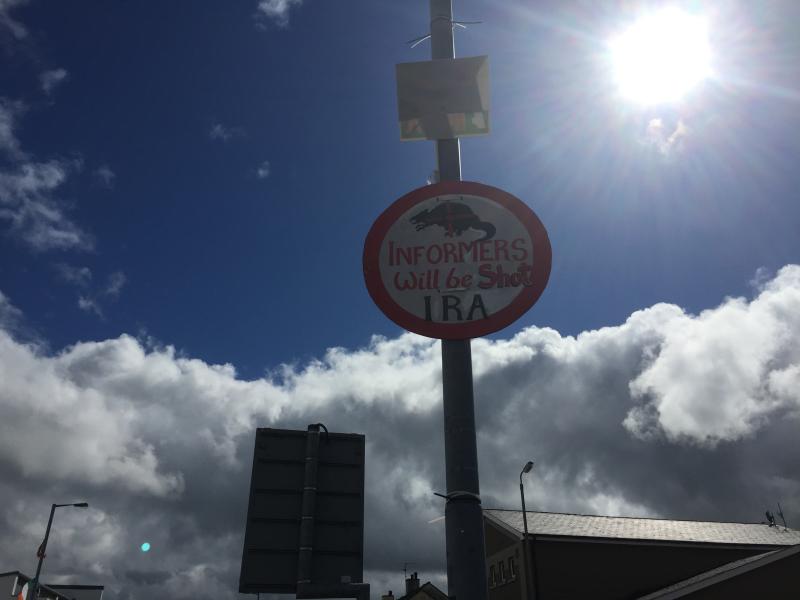 Fake traffic signs bearing threats to ‘informers’ from the ‘New IRA’ have also now appeared at Central Drive in Derry’s Creggan estate just yards from where Lyra McKee was fatally wounded two weeks ago today. Earlier today it was reported that graffiti threatening to 'execute' people giving information to the police over the murder of Lyra McKee had appeared in the area. Other pieces of graffiti daubed on the wall of the Old Library Trust building state ‘IRA here to stay’, whilst on the other side of the street on a wooden hoarding graffiti that had been altered to say the ‘IRA are done’ have now been changed back by supporters of the armed group. The wooden hoarding again now bears the slogan ‘Unfinished Revolution’ and is accompanied by carved out wooden letters several inches high saying ‘IRA’ painted in green, white and orange. And, on lampposts in the same area have appeared round signs painted up to resemble traffic signs. One of them is just yards from where a local primary school is this afternoon being treated as a polling station for today’s local council elections. One of the fake traffic symbols bears the image of a rat caught in the crosshairs of a rifle scope with wording which states ‘informers will be shot.’ The other sign says ‘RUC informers-They will forget about you, WE won’t-IRA’. The graffiti in the area appeared a day after the PSNI said that any witnesses wishing to give evidence at a trial involving the suspected murderer of Lyra McKee would be granted anonymity. Earlier today, Parish Priest of Mary’s in Creggan, Fr Joe Gormley said: "This graffiti is trying to create an atmosphere of fear. These people are trying to impose their will down the barrel of a gun. "It's absolutely outrageous and does not represent the people of Creggan. We need people to come forward who are prepared to give evidence. People need to show they have had enough of this."
ADVERTISEMENT - CONTINUE READING BELOW