Derry Walls potential unrealised due to lack of funding, says Tourism Chief, who believes the iconic attraction should be 'brought to life' for visitors 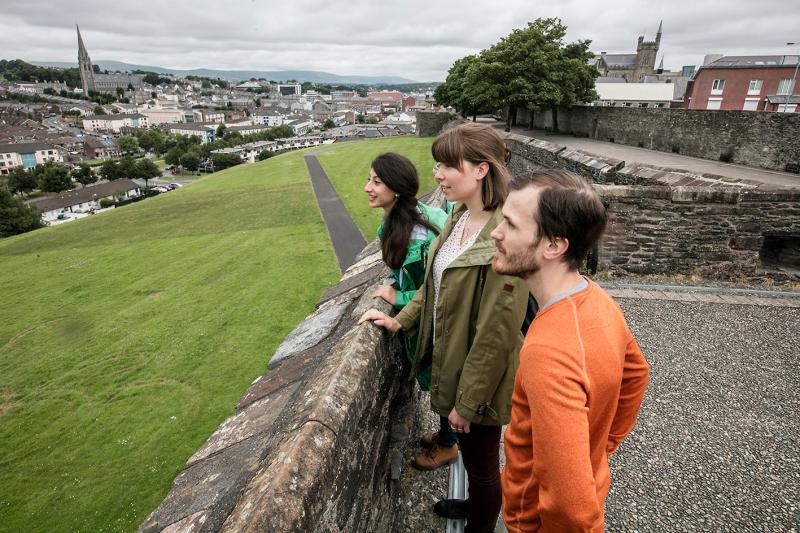 Central government funding is necessary to maximise the potential of Derry’s iconic City Walls as a tourist attraction, said the Head of Visit Derry yesterday. Odhran Dunne, General Manager at Visit Derry, told Westminster MPs that additional resources are needed to promote Derry’s 400-year-old Walls and bring them to life for visitors. Mr Dunne appeared alongside, Gerry Lennon, Chief Executive of Visit Belfast at an NI Affairs Committee session to discuss Tourism in Northern Ireland. Commenting on the Walls, he said: “We would like to see the City Walls brought to life as an experience, it’s done at different times of the year.  Whose role is it to promote the City Walls, it’s an iconic attraction in Northern Ireland, but whose remit is that, is it left to Visit Derry?” He added: “In other destinations you would have specific resources and management and marketing resources to promote such an iconic attraction.  We would like to see the City Walls brought to life through a full curatorial, animation programme that becomes a living breathing experience for visitors, rather than an inert object that comes to life with events at different times of the year. “But we’ve launched a new cultural strategy and all the facets of that will hopefully, with the support of central government, local government and the private sector, drive tourism to the City Walls.” The NI Affairs Committee has extended its remit since devolved government collapsed, and now involves itself in matters which were normally the responsibility of elected MLAs. The aim of yesterday’s session was to discuss tourism in the face of Brexit, however, a range of issues were discussed. Mr Dunne spoke of the need for improved infrastructure, including the A6 road and rail links in the North West. Derry Girls was glowingly referred to as a “motivating factor”, bringing tourists to the city, particularly since it gained an international platform on Netflix. Labour Party member, Kate Hoey, asked why there isn’t more of a push to establish a “really fast train link” between Belfast and Derry. “If it took half the time it does at the moment we would get an awful lot of the coaches off the roads.  Some of the North Antrim coast is being destroyed by tourists and pollution in the summer months,” she said. The funeral of Lyra McKee took place last week after she was shot and killed by dissident republicans on April 18. Citing the Bishop Street courthouse bomb earlier this year, Ms Hoey questioned Mr Dunne about just how damaging paramilitary attacks are for tourism in the city. “We will continue to monitor it.  Sometimes in the immediate aftermath there are cancellations at some of the hotels, but it seems to rebound much quicker than it did years ago. “But it remains a concern in trying to send positive PR into the international marketplace for us.” Brexit The absence of an NI Assembly has left both Visit Derry and Visit Belfast without a tourism strategy, meaning they have been working from a draft strategy for ten years. Mr Dunne said: “Tourism is cross-departmental, if you don’t have a defined strategy with departments and parties buying into that, it makes it difficult for the likes of Tourism NI to implement that strategy. “The strategy is sitting with the department for approval and we see that as a key priority.” Both Mr Lennon and Mr Dunne agreed that the issue of a hard border would not be conducive to progressive tourism and believe the uncertainty around Brexit isn’t helping matters. The meeting also heard that Visit Derry was the first to bring a cruise ship to NI through Cruise North West. This year will see a record number of cruise ships docking in Derry, 18, which will bring about 10,000 passengers. Meanwhile, 148 cruise ships are expected to dock in Belfast, attracting 280,000 passengers. There are currently three berthing facilities in Derry, the city centre, Lisahally, and Greencastle.  “The challenge is the industry has gotten much bigger,” Mr Dunne explained. “Ships have gotten much bigger and it has been difficult for us, we operate a tender facility at Greencastle, through Foyle Port in partnership with Donegal Council so unless we develop that. “That’s a major capital request, we’re working with Donegal Council and Derry City and Strabane District Council to look at a feasibility study on that.”
ADVERTISEMENT - CONTINUE READING BELOW