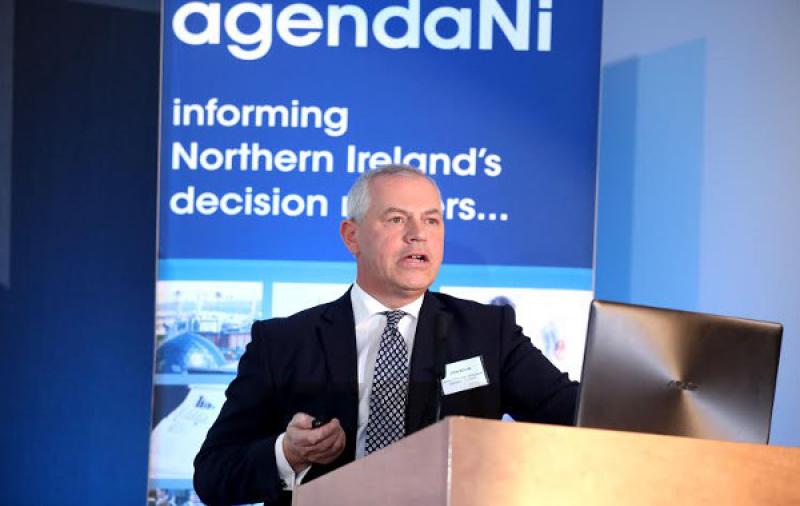 The £105 million economic package announced today for the Derry City and Strabane District Council region has the potential to rise to £300 million, according to the chief executive of Derry City and Strabane District Council. John Kelpie (pictured) was speaking after the British Government confirmed a £50 million City Deal and £55 million Inclusive Future Fund for the region. Mr Kelpie said additional funding over the next 15 years from the likes of Council, Ulster University, Stormont and private investors to treble that amount, in doing so, creating thousands of jobs. Mayor John Boyle described the funding as “a significant catalyst for change and economic growth” for the Derry City and Strabane District and the wider North West and expressed his delight that it has been secured during his Mayoral year as a key priority. He said: “This hugely significant announcement today for the Derry and Strabane District will go some considerable way in addressing the long-standing obstacles to economic development that this City Region and its people face. It is good news and is the result of an enormous amount of work and sustained effort invested by Council and the City and Regional partners to develop, deliver and negotiate on the bid.” Mr Kelpie said the funding package, if directed at the key agreed strategic growth projects and if used to lever significant further public and private sector investment, would deliver a "new era of unprecedented growth" and development for the City and Region providing tangible benefits for all of our citizens and a promising future for our children and young people.” Mr Kelpie said the next step would now be for everyone to continue to work together to develop the necessary detailed business plans and advance the projects through planning and design. He concluded: "We will do this by using this unprecedented opportunity to promote the future of this City and District as a location of choice for all in terms of business, lifestyle and ambition.” SInn Fein Foyle MP Elisha McCallion said: Sinn Féin MP Elisha McCallion has said today’s announcement of £105m funding is a first step, but the British government must do more to assist the development of the north west. The Foyle MP said the package was "a first step, but more must be done to address regional imbalance." She added: “The British Government have a responsibility to deliver a proper financial contribution towards developing the north west region. “We need more adequate funding to help unlock the region’s economic potential as part of the strategic growth plan. “Since becoming MP, I have worked daily to ensure funding like that announced today can be achieved to help develop and transform this city region and this remains my priority. “Sinn Féin has always believed that transforming this region and achieving an inclusive growth deal requires collective thinking and financial support from other partners including the EU and the Irish government. “In the coming days and weeks I will continue to speak to both governments and work with local councils and key stakeholders to deliver upon the Strategic Growth Deal and secure additional financial assistance from both governments and the EU.” SDLP leader Colum Eastwood has welcomed the announcement but warned that the deal required match-funding from a local power sharing government to maximise its potential to change people’s lives. He added: “The SDLP welcomes confirmation of this significant funding package this morning. We were the party that first proposed an approach to the Treasury to demand a City Deal for the North West that could transform our infrastructure, attract new jobs and stimulate economic growth. The first step in that process is the expansion of Magee as a key skills and economic driver. “Over the last number of days, I’ve been speaking with the British Government and Treasury in an attempt to maximise the initial outlay. The final figure is less than we had hoped for, which is a disappointment, but we will squeeze every benefit out of this investment. “What’s important now is that we secure match funding from a functioning Executive. People in the North West were neglected by the last period of government, they cannot be abandoned by absentee politicians now. It’s time for all parties to come back together, for politicians to get back to work and for us all to deliver for Derry. That will be a key focus in the talks as they start today. Brian McGrath, president of Londonderry Chamber of Commerce said the funding was "hugely welcome" and provided a solid platform upon which to grow and enhance the competitiveness of the City and Region and attract further significant exciting new companies, business prospects and investment.
ADVERTISEMENT - CONTINUE READING BELOW