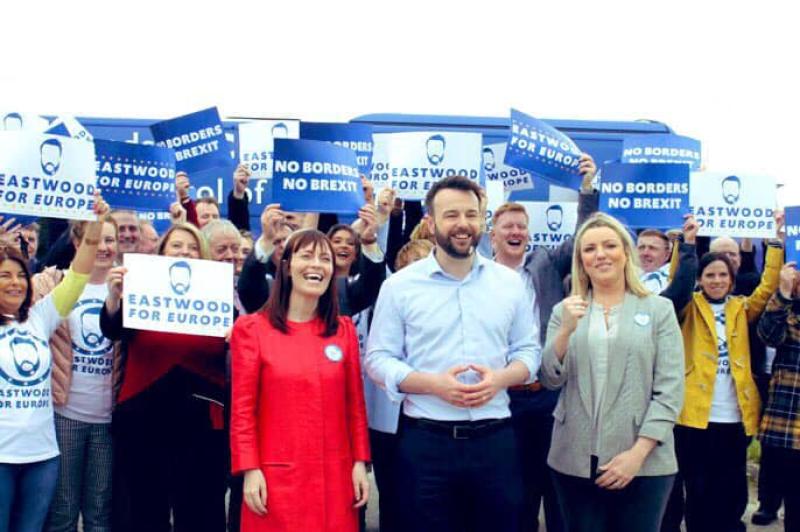 SDLP leader Colum Eastwood yesterday officially launched his bid to become a MEP at the border crossing between Derry and Donegal at Bridgend.

A campaign battle bus will be used by the SDLP during the campaign mimicking the promotional method used by the Vote Leave faction during the build up Brexit Referendum almost three years ago.

Mr Eastwood has said that the heart of his campaign will be the exposure of the “campaign of lies” promoted by Brexiteers in securing Britain’s departure from the European Union.

He said that “honest politics” are required and this election is “our time to take back control.”

Britain’s failure to complete Brexit within the scheduled time slot means that elections to the European Parliament will now take place on Thursday, May 23.

Speaking at the launch, Colum Eastwood said: “This is a critical election. For three years, the voice of the pro-Europe majority in Northern Ireland has been silenced, sidelined and ignored. That ends here and it ends now. This campaign is an opportunity to reassert our demand to remain in the European Union.

“The European Union is proof that the simplest of ideas are always the most powerful. After centuries of division and conflict, people across Europe made a lasting choice. We decided that bridges work so much better than borders.

“Europe has been a positive and progressive influence on our society. It has supported peace and contributed to prosperity across our communities.

"We do not recognise the Europe portrayed by the baying DUP brexiteers at Westminster because it simply does not exist."

While the overall result in the 2016 referendum recorded 52% to 48% result in favour of leaving, the result in Foyle and East Derry was 78% and 52% respectively in favour of staying in the EU.

Northern Ireland is treated as a single constituency for the purposes of European elections and returns three MEP’s to the parliament in Brussels. Mr Eastwood will be joined on the ballot paper by outgoing MEP Martina Anderson Sinn Fein, Diane Dodds of the DUP, Danny Kennedy of the UUP, Claire Bailey of the Green Party and the leader of the Alliance Party Noami Long. Jim Allister of the TUV, a former DUP MEP will also contest the election as will Amandeep Bhogal for the Conservative Party and UKIP’s Robert Hill. Two Independent candidates are also seeking election and they are Neil McCann and Jane Morrice.

And, in a nod to the recent official link up with Fianna Fail, Donegal TD Charlie McConnellogue was also present at the event.

Colum Eastwood continued: “We need strong voices to take a stand for our farmers and agri-food industry, for our community and voluntary sector, for our cross-border businesses that rely on seamless trade across this island. The SDLP was the only party to register to campaign against Brexit, it was the SDLP who first proposed special status for Northern Ireland - the SDLP is the best voice for people here and we are best placed to take this seat.

“It was John Hume who championed the case of Europe, who used Europe as a lever and as a guardian of our peace process. At this moment of great uncertainty, it’s time that we reclaim John Hume’s seat and send the SDLP back to Europe,” Colum Eastwood said.

The SDLP have not held a seat in Europe since John Hume did not contest the EU election having announced his retirement from politics in 2004.

And, when he announced his candidacy for the upcoming election last month Colum Eastwood told the Derry News: “The DUP seat is safe, the Sinn Fein seat is safe. The battle is when you look at the numbers between the SDLP and the Ulster Unionist Party and actually also Jim Allister (TUV).

“I think we’ve a good chance. We were fewer than 2,000 first preference votes behind the Ulster Unionist Party last time. We are in fourth position and we need to get into third.