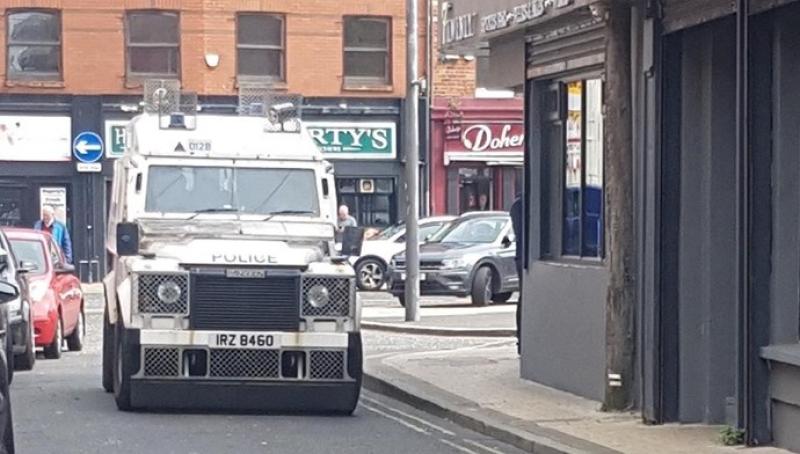 Republican grouping Saoradh has blamed a combination of “unprofessional journalism” a “near hysterical clergy” and the “crocodile tears of former republicans” who are “working along with British Crown Forces” following a PSNI raid on its Derry offices on Tuesday this week.

In a statement, police said that the Major Investigation Team looking into the murder of Lyra McKee carried out the raid at Chamberlain Street on May 7.

The PSNI said that a number of items were seized but that no arrests were made and that their inquiries are continuing.

In a statement, Saoradh said the “large invasion” of its national headquarters was carried out by “British Military Intelligence” and police Tactical Support Group personnel and that it followed on from further raids on the homes of Saoradh members.

In the wake of the murder of Lyra McKee on Thursday, April 18 Soaradh denied it is the political wing of ‘New IRA’-the group who later admitted firing at armoured vehicles in Creggan resulting in the death of the 29-year-old journalist.

The group also said that phones, computers and children’s school work “have been taken despite bearing no relevance. In addition to this Saoradh activists in Derry and further afield have been under overt surveillance in recent weeks.”

The statement continued: “Since the formation of Saoradh British Crown Forces have directed an onslaught of harassment towards party members and supporters and this has culminated in another combined Crown Forces and British Military Intelligence raid on our party headquarters.

“It is clear that our party headquarters, our party members and our support base are being actively targeted in a futile attempt to stop the public availing of the free services we offer.

“As local Republicans and members of our community made their way towards Junior McDaid House this morning, colonial foot soldiers hurled abuse. Proof, as if it were needed, that British Crown Forces are intent on harassing and intimidating Republican communities.

“While so called elected representatives sit at home watching live videos of Republicans being harassed and our community coming under attack, our activists are on the ground responding. Attacks like this will do nothing to thwart Republican activism and will only harden our resolve.

“We would also like to take this opportunity to thank local businesses and residents surrounding Junior McDaid House for their continued support throughout today as they provided refreshments while we were denied access to our offices.

“As Saoradh continue to grow, so does our support.

We state now, loud and clear; Saoradh, IRPWA and Eístigí are going nowhere.