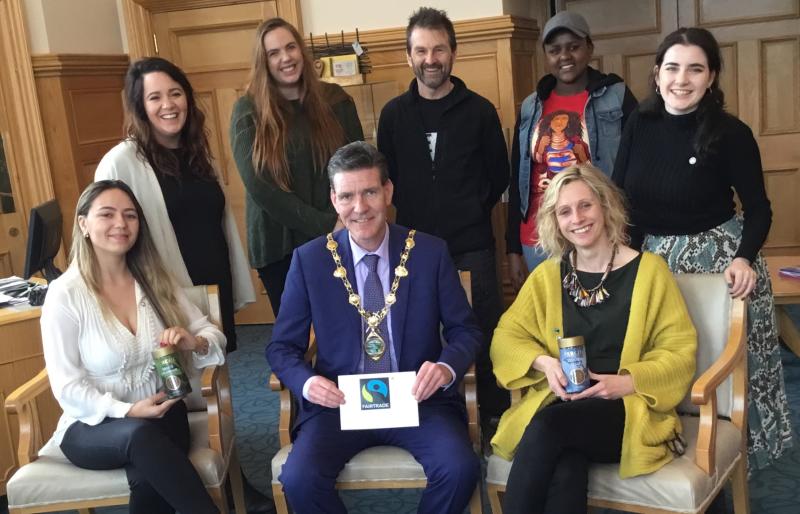 Mayor of Derry City and Strabane District Council, Cllr John Boyle has given his support to World Fairtrade Day (May 11) and has paid tribute to the work of Foyle Fairtrade and young people throughout the City & District in raising awareness of the need for better prices, working conditions and fair terms of trade for farmers & workers in the developing world.

Fairtrade is a trading partnership which recognises the human rights of all involved. It ensures fair wages for all – and that all goods and services which carry the Fairtrade logo are sustainably sourced and managed. Foyle Fairtrade is a Steering Group of volunteers from across Derry and Strabane, including members of Derry City and Strabane Council, who work to raise awareness of Fairtrade and explore local actions that can be taken to create a more fair and just world for all.

As part of its fifth birthday as a Fairtrade City and District earlier this year, Council hosted a series of celebratory events to acknowledge the success of the Fairtrade City status – including a visit by Sara Montoya from the COOPCAFER coffee co-op in Colombia who gave an insight into the benefits of Fairtrade to her community.

During Fairtrade Fortnight earlier this year Foyle Fairtrade also hosted a number of events exploring the importance of Fairtrade and looking at ways in which local people – including young people – can support this movement for change. Indeed, through engaging with the Cathedral Youth Group, Youth First and Pilot’s Row Youth Group, Foyle Fairtrade examined the ‘Power of YOUth’ for trade justice.

By exploring Fairtrade through the medium of art, young people were given the opportunity to learn more about what the Fairtrade logo stands for and the role we can all play in supporting the campaign.  Young people created their own pieces of artwork which they have now displayed at local youth centres to help raise awareness of Fairtrade and spread the message of kindness and solidarity with farmers and workers in the developing world.

Mayor Boyle said: “I was delighted to support World Fairtrade Day – and pay tribute to the tremendous work of Foyle Fairtrade and young people throughout the City and District who are promoting social justice for those in developing countries who produce many of the food items that we enjoy each day.

“I’d also encourage people to consider buying Fairtrade – and in doing so, support millions of the world’s poorest farmers who find themselves still trapped in trade poverty.

“People throughout our City and District have always demonstrated a strong global conscience and solidarity with other people in developing countries. I therefore have no doubts they will do what they can to support Fairtrade – not just on World Fairtrade Day, but for many years to come.”

A spokesperson from Foyle Fairtrade added: “We believe that supporting World Fairtrade Day and this movement for positive change is a powerful way to show solidarity with farmers and workers in the developing world.

“We are also so inspired by the amazing work done so far with our local schools and youth groups – and are so excited about what is yet to come!”

In the upcoming months Foyle Fairtrade will be continuing their engagement with local schools and youth groups – including the hosting of a number of events to further spread the message of solidarity with farmers and workers in the developing world. If you are interested in getting involved with Foyle Fairtrade or becoming a member of its Steering Group please contact the team at foylefairtrade@gmail.com

If you would also like the Foyle Fairtrade team to host a workshop in your school, youth group or workplace – or indeed a public event exploring what Fairtrade means and the global campaign to ensure farmers get a fair deal and price for their produce – please don’t hesitate to get in touch!

CAPTION: Mayor John Boyle hosting a reception during Fairtrade Fortnight this year for Sara Montoya from the COOPCAFER coffee co-op in Colombia (front left) who gave an insight into the benefits of Fairtrade to her community.
ADVERTISEMENT - CONTINUE READING BELOW