Lyra McKee book of condolence to close this week 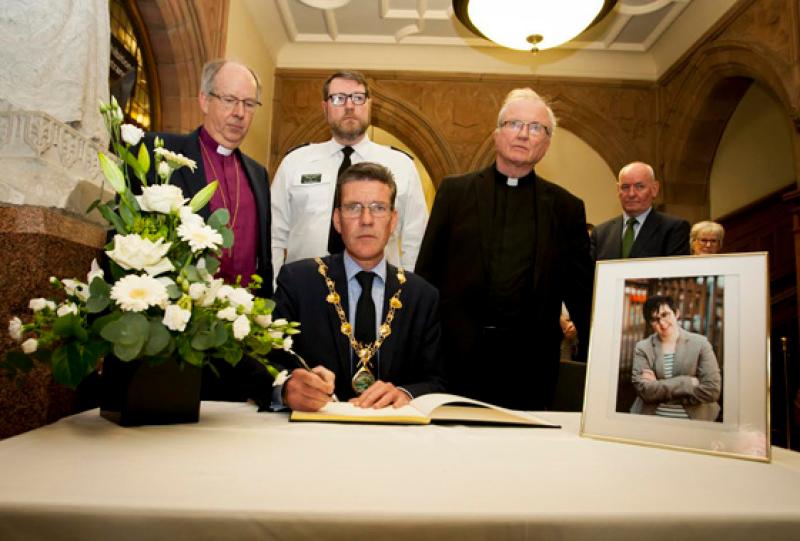 The book of condolence in memory of Lyra McKee that was opened by the Mayor of Derry City and Strabane District Council at Derry’s Guildhall following the murder of the 29-year-old journalist last month, is set to close this week so that it can be presented to her family. Encouraging the public who wish to sign the book to do so before the close of business this Wednesday, 15 May, and online tomorrow, the Mayor said it was important that the public availed of the opportunity to extend their sympathy to the partner and family of Lyra McKee. Members of the National Union of Journalists joined with the Mayor, political, religious, and community leaders in signing the book following the tragic murder of the young journalist that has shocked the entire community. Mayor Boyle, a personal friend of the 29-year-old journalist, said response to the Book of Condolence has been phenomenal with hundreds calling into the Guildhall or signing it online. He said there was an out-pouring of love for Lyra and her family and the Book of Condolence provided a forum that allowed the public to express their condolences and show their solidarity with them. He said: “Lyra should have been in a generation that could grow up in a prosperous and peaceful island of Ireland. Her shocking murder serves as a reminder of the urgent need for us to work together to secure peace. I am heartbroken that senseless violence on our streets has cost the life of a wonderful person whose work and advocacy was always about making the world a better place. "I will be presenting the Book of Condolence to her family next week and would encourage who has not yet signed it but who wish to do so to avail of the opportunity before 15 May. They can call into the Guildhall or alternatively sign the book via our website at www.derrystrabane.com/mayor.”
ADVERTISEMENT
Advertise with Us
ADVERTISEMENT
Advertise with Us